There is no mechanism to guarantee cuts to carbon emissions in the federal government’s plan to reach net zero by 2050, which relies instead on voluntary action by industry, prompting warnings that global warming will cost nearly $600 billion by 2030 without greater climate action.

University of Melbourne professor of environmental economics Tom Kompas estimates climate change will cost the economy at least $584 billion by 2030 and $762 billion in 2050 under the current trajectory for a 2 degree rise in average global temperatures on pre-industrial levels. 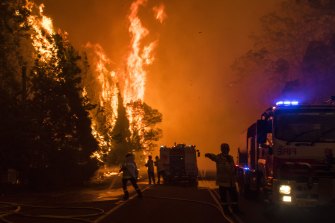 The Black Summer fires are estimated to have cost the economy $110 billion.Credit:Nick Moir

The government’s plan to reach net zero by 2050 is guided by a mantra of “technology, not taxes”, which rules out limits on greenhouse gases or a carbon price and assumes industry will reduce its global warming contribution of its own accord.

Each Australian would be $2000 better off by 2050, according to the government’s modelling released on Friday, but this figure does not include the financial costs of global warming.

The modelling included only the benefits from committing to net zero – such as growth in critical minerals to build renewable energy or a reduction in borrowing costs for foreign capital.

But 86 per cent of a panel of 58 top local economists selected by the Economic Society of Australia last month backed an emissions reduction target coupled with a carbon price as the most efficient method to reduce greenhouse emissions.

Economist and Climate Council spokesperson Nicki Hutley said on Tuesday it was a “real Hail Mary” policy from the government that assumed voluntary action from industry to curb its emissions and did not factor in the economic impacts of warming.

“Any good modelling includes a cost-benefit analysis, but they have excluded the costs of failing to act on climate change, such as health, damage to property from weather events or economic distortions,” Ms Hutley said.

Despite the federal government’s claim carbon taxes would damage the economy, the modelling “absolutely” factored in a carbon price with an assumption that industry would pay $24 a tonne to offset emissions – a cost that ultimately would be paid by Australians, she said.

Professor Kompas said his 2030 and 2050 estimates were conservative and only included impacts that could be reliably modelled, such as reduced agricultural and labour productivity, loss of arable land due to sea-level rise, some health impacts and losses from infrastructure.

His modelling excluded impacts that were harder to model but were expected to ramp up due to global warming, such as floods, bush fires, pollution and biodiversity losses from environmental losses.

Climate scientists have found the Black Summer fires were intensified by global warming and bushfires generally would become more frequent and intense as the global average temperature rises.

Professor Kompas in May estimated the national cost of emissions reduction, achieved with either a carbon price or binding renewable energy target, at $36 billion to 2030, or what he called a “negligible impact” of 0.14 per cent of GDP.

He told this masthead on Tuesday a “major reduction in fossil fuels and a massive increase in renewables” was required for Australia to move in line with the global efforts required to keep warming below 2 degrees.

“But the cost of this action is not very large compared to the economic damage from climate change,” he said.