The pandemic has taught us that there are some health risks you cannot necessarily see, feel or taste. But unlike COVID-19, not all these risks have an immediate impact.

The potential hazard created by the proposed Mornington Peninsula quarry is one that could silently linger for a long time before we see people become ill, one that may not materialise for many years. 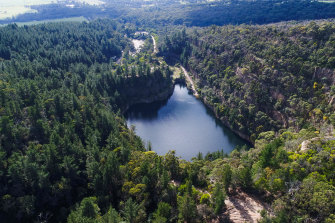 The site of the proposed quarry.Credit:Joe Armao

I’m a lawyer who works with people suffering from dust-related diseases. I’m also a mother of two young boys on the Mornington Peninsula not far from this proposed quarry. So, it won’t surprise you that I am strongly opposed to it.

It is simply not worth the risk.

That’s not just my view. Ask the 120-plus doctors, health experts and community members who have called for the quarry plans to be abandoned.

If permitted to go ahead, the proposed quarry at Arthurs Seat is likely to create airborne dust, including silica dust, in its vicinity over many years. That dust could potentially be harmful to the health of not only quarry workers, but also the nearby community.

People these days know to be worried about high levels of dust, but long-term or chronic exposure to lower levels can be just as dangerous – especially when those exposed have so much of their lives ahead of them.

Red Hill Consolidated School is just 800 metres away from the proposed quarry site.

I have seen first-hand the human consequences of silica dust exposure in the stonemason industry; of young men in their 20s and 30s, facing an overwhelming and uncertain future because of new forms of silicosis by dust they too were told not to worry about. Warnings are too late for them now.

Silicosis is a shocking, irreversible and often progressive lung disease. And it is avoidable.

There is no evidence to support a safe level of silica dust exposure. While silicosis most commonly develops from exposure in an occupational setting – mining, quarries, stonemasonry – it may not be possible to eliminate silica dust emanating from a quarry producing granite products, even with health and safety measures in place.

It would be tragic if the proposed quarry is permitted to go ahead, only to discover in years to come that local Mornington Peninsula residents have developed irreversible injury from exposure to silica dust or other dust-related chronic lung conditions. It would be tragic, but it would not be unforeseeable.

I understand quarries play an important role in providing workers with jobs and can help to keep infrastructure and housing costs down. But that doesn’t mean it’s OK to locate them near to the local community and schools.

Sadly, we know only too well the serious consequences similar operations have had for workers, residents and children.

I’m not suggesting the proposed quarry will turn Arthurs Seat into Victoria’s version of the blue asbestos town of Wittenoom. But I am saying that local residents there were also told not to worry about any dust hazard, and the company giving that re-assurance was the last to put up its hand when it all went so horribly wrong years later.

I love the Mornington Peninsula. It’s one of the most beautiful places in the world. If the proposed quarry poses even a small risk to our community, it’s just not worth it.