Our bodies are one thing alive; quite another when they're dead.

We sent my father's  body to the crematorium in a cheap coffin decorated with 100 Italian Baci chocolates still in their pretty silver and blue wrappers, their secret messages of love tucked inside. Along with the chocolate kisses, we covered his casket in about the same number of rosemary sprigs. These flourishes were my stepmother Becky's idea, so the man we all loved knew he was loved and that we'd never forget him.

My father, Richard, was not a superstitious man. He did not believe in ghosts, the afterlife, or God. But he had one final instruction for us before he left. "Put me out to sea," he'd said after he'd selected and paid for his own coffin – the cheapest in the undertaker's brochure.

In life, my father was full of instructions. We were his arms and his legs and there was much to be done, so his orders were endless. We undertook his directives like faithful foot soldiers.

We were all diligent in our undertakings on his behalf, but this final demand, I took on with an even greater sense of duty. "Yes, dad," I said a few weeks before his death, "I promise, we'll put you out at sea."

My father lived more than four-decades confined to a wheelchair after polio struck him down at the age of 20, so I supported his desire to be scattered to the wind – merged with the sea where he'd been happiest as a young naval officer. 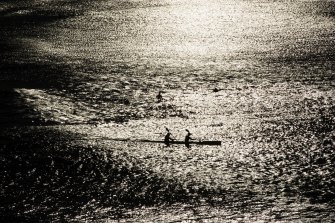 A former naval man, it was his desire to return to the sea and the wind.Credit:Jessica Hromas

After polio, my father's body was 95 per cent paralysed and he was confined to an iron lung that pumped air into his infirm lungs for more than a year. When he was finally able to breathe for himself he was put into a wheelchair and was pushed around by doctors and nurses, his parents, friends, my mother and, eventually, by my brother and me. Then he found a new love, my stepmother, Becky, had two more kids and upgraded to an electric wheelchair the moment they were invented.

The electric wheelchair meant my father finally had some freedom. Everything in life is relative and, for my father, getting from one room to another without needing to rely on anyone else was huge.

But true freedom could only come after his death when he'd be released from his paralysis and the contraptions that enabled his life. I felt a great obligation to hold up my end of our deathbed agreement by doing exactly what he instructed us to do as quickly as possible.

The thing about death, though, is that the dead have no control over the living. My father couldn't have predicted that his grieving family weren't quite ready to let him go and that it'd take us 15 years to cast him adrift and satisfy his final wish. 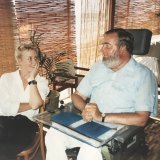 Caro Llewellyn and her father Richard in around 2000.

In the movies, people's ashes always seem to be housed in ornate silver or gold urns. Not so in real life, or not so in my father's case at least. Perhaps he'd determined it so. He'd wanted to be buried in a cardboard box, so it would be no real surprise that he'd also requested the cheapest "urn" possible.

My father's new home was nothing close to an urn. It was a beige plastic container with a push top lid that could only be pried open with a screwdriver.

I only recently saw it. I was back in the family home alone one night, and a bit more than a little drunk, when I went looking for him. I found him in an old metal wood-box which sat under a window in the sunroom, the lid embossed with a grand old sailing ship. The latter was a giveaway, so he wasn't too hard to locate – but it brought tears to my eyes to see that Becky had set his sailor's cap on top of him.

I moved his cap aside, picked him up gently and carried him outside onto the deck overlooking the sea. I sat on the slightly wet cushion of one of the deck chairs and set him down across from me, so he was perched on the railing. It was a beautiful clear crisp night. The stars were bright in the night sky and a gibbous moon hung low, casting a long ribbon of yellow light over the still water.

"I'm sorry, Dad." I whimpered into the wind. "You were meant to be free by now. If I didn't have this stupid leg, I'd walk you down to the water and set you free." It wasn't just the problem with my MS leg that stopped me. Truth was I was far too drunk, but I also didn't know where in the house to find a screwdriver.

Imagine my relief when, a few weeks later, Becky rang and said, "I think it's time. I want us to give him a mariner's farewell."

My father couldn't have predicted his grieving family weren't quite ready to let him go and that it'd take us 15 years to satisfy his final wish.

"Thank God," I said to myself. Thinking finally, he'd be set free, but more importantly, with relief that I hadn't gone through with my drunken plan and been sprung when an empty urn was discovered.

Except for special occasions such as weddings and funerals, family gatherings where we all got together stopped after our father's death. Without him, our family glue had come unstuck. To our amusement, my sister called this rare coming together of our now fractured family: The Ashes Tour.

My brother and his wife flew in from Sydney and I arrived with my new partner from Melbourne. All of us arranged to meet for lunch before honouring our father's last wish.

But how would we do it?

One of my siblings called and suggested going back to Port Adelaide to crack him against a ship's bow like they do with a bottle of champagne before a maiden voyage. Another said they wanted to keep some of him at their home. Someone else wanted to put him into a floating ball and push him out from the shore. Another idea was to walk him out to the end of the  jetty and throw him off from there.

"Can't we all kayak him out together and scatter him straight out into the sea?" I asked knowing that was the only way to guarantee he'd be properly dealt with.

But it was the middle of winter and half of us didn't like that idea.

I found myself in a quandary. Do I take charge? Everyone knew I was as bossy as our father, so it wouldn't come as a shock to anyone – but I'd been working on myself and making valiant efforts in other relationships to let-up on the taking charge of any and every situation in my life, so I took pause.

‘OK,' I thought, ‘seeing as we can't agree and everyone's doing their absolute best for the man they love, how about we divide him up? That seemed highly practical and he would have seen the sense in it. Why not?

In the end, the weather unexpectedly cleared, and it was agreed that we'd turn The Ashes Tour into the Henley Regatta, and paddle my father into the ocean in front of the house. My brothers didn't have suitable attire for the journey, but I'd travelled with my swimmers for just this moment and my sister Anna was ready to come with me.

At some point in all these deliberations, Becky said we should send him out with his favourite foods. Becky's second husband, Marty, made some sturdy origami boats to carry our father's last supper into the brink with him. I'd forgotten about all this when we walked down to the beach. My little brother held my arm as I struggled along the sand dragging my bad leg. My big brother and my partner manoeuvered the kayaks to the shoreline.

We invited my father's beloved friend, Robyn Archer, to help us send Dad off. She arrived with a guitar and said she'd been up early preparing a playlist of my father's favourite tunes. The bawdy drinking song Frigging in the Rigging was a favourite, but for this rendition Robyn revised its more "vibrant" sexual descriptions so as not to offend innocent passersby walking along the beach.

My brother helped me into one of the kayaks and I sat in it, the waves lapping over me, while Becky made a speech through tears. It was cold.

Eventually we were ready to launch. We paddled out past the sand bar. My brother rang eight loud chimes on our family's newly polished brass bell to signify the finish of our father's final watch. Robyn started strumming and she and Becky sang. 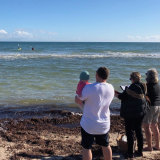 The sisters kayak out with their father’s ashes

Once we'd passed the sandbar, I glanced back to my family on the shore and thought how strange it all looked. "Well, Dad, we're doing this true to form," I whispered.

I grabbed the paddle of my sister's oar and she took mine, so we were clasped together against the push and pull of the waves. "Are you ready?" I asked. She nodded through tears. "I love you," I said.

My brother had pried the lid of dad's "urn" and left it loose. Even so, it was hard to get everything positioned. I held my sister's hand and tipped the container up and our father's ashes poured out and billowed in the water. They seemed to turn green under the surface. I passed the container to my sister and she held it high above her head, so a stream of ash lifted up and flew out far beyond our little boats. My sister was crying. I thought how brave and beautiful she was. After the urn was empty, I submerged the entire container below the surface, so it filled with sea water. I wanted to be sure every ounce of him was set free.

Then my sister launched the origami boats with their morsels. There was rye-bread toast, slices of fritz and pickled beetroot. Dad's favourite lollies: licorice, Fantales, jaffa balls.

The paper boats didn't float upright for long and soon the water surrounding us looked like the contents of a picnic blanket had been shaken out into the sea. Finally, my sister reached under her bra strap and pulled out a little folded note. She kissed it and threw it into the wind and then reached behind her for a Tupperware lunchbox, which she opened and tipped our father's absolute favourite food – pickled onions – into the waves.

We stayed clasped together in our kayaks as the little onions bobbed up and down like tiny buoys and the sound of everyone singing on the beach rang out to us.

This piece originated as a reading for the Melbourne Writers Festival. Caro Llewellyn's memoir Diving into Glass is published by Hamish Hamilton.