One man’s fish is another man’s poisson. Not for much longer, it seems.

French fishermen are growing alarmed. They fear a no-deal Brexit will exclude them from “British” waters where they have fished for centuries. The same applies to fishers from Ireland, Belgium, Denmark, the Netherlands and Germany.

More surprisingly (to some), fears of a cliff-edge Brexit are also sending waves of panic through parts of the UK fishing industry.

After years of one-sided propaganda – “our fish”, “plundering Europeans”, “a sea of opportunity” – a more complicated picture of European fishing benefits and losses is finally breaking the surface.

The nets of the UK and its maritime neighbours have been inextricably tangled for centuries. Cutting them apart will be calamitous for some European fleets – especially for boats from Brittany, Normandy and the Pas de Calais. It will also be disastrous for locally important and ecologically sustainable parts of the British industry.

Fisheries (0.12% of the UK economy) have been a powerful symbol for Brexiteers. They may now become one of the starkest examples of the folly of no deal.

British shellfish sales to the EU (mostly France and Spain) are worth £430m a year – more than a quarter of all UK fish exports by value. They are vital to small-scale fishermen in Scotland and the West Country. They will be devastated overnight if the UK loses paper-free access to the EU single market.

The promised instant bonanza for longer-distance British fishing fleets has also drifted into a fog bank. With just over two months remaining before a potential no-deal B-Day, utter confusion reigns in Whitehall on what will happen to fishing law and fishing rights on 1 November.

Will EU boats be excluded immediately, as the Brexit party and its acolyte Fishing for Leave stridently insist? Who will enforce the new rules or lack of rules when the Royal Navy has only 12 protection vessels to cover a sea area three times the size of the UK? Will British boats be able to fish whatever and wherever they want to fish?

One fishing industry leader said: “The word is that, if no deal happens, EU quotas will probably be maintained until the end of the year and maybe longer. But on what legal basis? And what happens then? After 10 years of government cuts, the civil service no longer has the manpower or institutional knowledge to sort out stuff like this.”

A myth has been propagated by Brexiteers. There is a single “British fishing industry” which will benefit from reclaiming the “60/70/80% of British fish” caught by EU boats.

No, there isn’t. There are competing interests. English v Scottish; deep-sea fishing v inshore fishing; industrial v family-scale boats; fishers v processors. Some of the most vibrant, locally important and ecologically respectful parts of the UK industry have nothing to gain and everything to lose from Brexit.

They depend on shellfish, lobsters, crabs and langoustines (crayfish) that are quota-free or are overwhelmingly allocated to the UK. More than 80% is sold to the continent (mostly Spain and France). This trade has grown large because of the border-free EU single market. 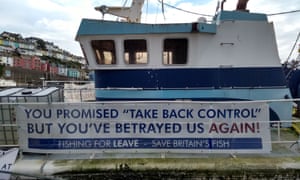 Post-Brexit, trucks arriving in France with fish caught by scores of small boats will have to supply scores of “origin” and “health” documents – one for each boat and each catch. Traders will have to find UK local inspectors in working hours to verify the origin of the seafood and vets to certify its quality.

Little planning has been done in the UK to make any of that possible. The highly perishable trade will add to, and suffer from, the chaos in cross-Channel trade forecast by the leaked government Yellowhammer document. Add to the bouillabaisse the action likely to be taken by justifiably angry French fishermen …

Justifiably? We are encouraged to believe that it was the EU that first allowed foreign boats to fish in British waters (the exclusive economic zone of up to 200 miles). It wasn’t. The common fisheries policy, first established in 1983, enshrined historic fishing rights. The quotas were based on 1970s catches but the fishing pattern went back for decades and in some cases centuries.

Olivier Leprêtre, the president of the northern France fisheries committee, says: “Fishermen have always followed the fish. At the start of the last century, my great grandfather fished in the Thames estuary.”

He and other French fishermen’s leaders are threatening to block UK fish imports if they lose all access to British waters on 1 November. They are not planning to blockade Channel ports but they will stop British fish from leaving the Calais area.

International law will, arguably, be on their side. When it becomes an independent “coastal state”, the UK is obliged by the UN law of the sea to negotiate conservation and access deals with its neighbours.

A case can be made for changes in the EU quota patterns and extra quotas for British boats. A fairer share for inshore (under 12 metre) boats is long overdue.

But such changes demand patient negotiation not confrontation or instant abrogation of centuries-old rights. No negotiation has yet started. When they do, they may last many months.

In the meantime, several large British boats, dependent on EU-agreed quotas in Norwegian waters, will have to suspend fishing if EU law lapses in the UK on 31 October. Other British fishermen, wound up by the xenophobic rhetoric of Fishing for Leave, will expect to claim their off-shore “bonanza” immediately. Since no new quotas have been drawn up, they look likely to be disappointed – and very angry.

Just how much extra fish might there eventually be for the British fleet? UK boats catch just 40% of the tonnage of fish caught in British waters but they already catch more than 60% by value.

French and German boats take a lot of saithe (a relative of the cod) which UK consumers don’t like. Much of the fish caught by Danish boats is so-called industrial species (sprats and horse mackerel) which go to feed pigs. Horse mackerel and chips, anyone?

Overall, the UK imports 70% of the fish we eat and exports 80% of what we catch. The UK already has most of the quotas for haddock and generous quotas for cod (which is anyway growing scarce once again).

For British boats to catch what EU boats now catch – the so-called “sea of opportunity” – would demand radical changes in British eating habits and/or fish processing and exporting industries. Neither can happen overnight. Where would we wish to export much of the promised El Dorado of fish? To the European Union.

Stop eating fish. It’s the only way to save the life in our seas | George Monbiot

In the immediate wake of a no-deal Brexit, British fishermen may end up with the worst of all worlds. They will face calamitous delays and bureaucracy on overnight fish sales to the continent. The government will be obliged by international law to delay distribution of quotas while it enters lengthy talks with the EU27 and the Norwegians.

One British inshore fishing industry leader said: “If Brexit happens, there will, eventually, be a few people who make a lot of money. But they will probably be the big-scale skippers and industrial-scale companies who are already rich. I don’t see much for struggling coastal communities or smaller fishermen. Those who depend on the EU market could be wiped out.”

Conclusion. You can win a political argument with lies and myths. Governing or negotiating with them is as useful as fishing without nets.

• John Lichfield is a journalist based in France