There are question marks around the exact origins of the quote, “In the future, everyone will be world-famous for 15 minutes,” but it’s become synonymous with Andy Warhol, the bespectacled pop artist who spent a career examining the nature of fame and celebrity.

Prepping for my interview with rising star Sydney Sweeney, I wonder if the quote should be reworked: “In the future, anyone world-famous can only really spare 15 minutes”.

This is the amount of time I’ve been allocated for a Zoom chat with Sweeney. At just 24 years old she has already built up a solid body of work, playing a range of complex young women across various HBO shows including Sharp Objects, Euphoria and, most recently, The White Lotus. 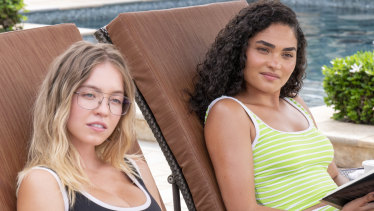 Sydney Sweeney and Brittany O’Grady in HBO’s The White Lotus.

She’s also starred in her fair share of films, appearing alongside Brad Pitt and Leonardo DiCaprio in Quentin Tarantino’s Once Upon a Time… in Hollywood and taking the lead in Amazon Prime’s R-rated Rear Window knock-off, The Voyeurs. Suffice to say, the clock isn’t ticking on Sweeney’s career – but it is ticking on my time with her, so here’s what I learned from our 15-minute conversation.

She’s a magnet for Australians.
A quick check of her IMDB profile reveals she has starred alongside Australians in nearly all of her major roles. There’s Yvonne Strahovski in The Handmaid’s Tale, Murray Bartlett in The White Lotus, Damon Herriman and Margot Robbie in Once Upon a Time – the list goes on.

“I think there is some force beckoning me to you guys,” says Sweeney, whose next film Night Teeth stars another Australian actress, Lucy Fry.

Her favourite one is Kodi Smit-McPhee.
If she had to choose a favourite Australian, then chances are it might be X-Men star Kodi Smit-McPhee. “Kodi was the first Aussie I met, we grew up together in the same apartment complex [in Los Angeles], and we became friends,” says Sweeney.

Actually, it might be Kodi’s dad, Andy.
”No one knows this but Kodi’s dad, Andy, was a mentor to me, and he was the one who started my process of acting; he taught me to separate myself from my characters.”

Being an “It” girl can be lonely.
While 3.6 million people follow Sweeney’s every move on Instagram, it’s not the same as making genuine friends.

“There are so many types of friendships in this industry, people who try to use you, people who want leverage,” she explains. “At the same time, you can become best friends with someone for six months during filming, and then you may not see them again, so it’s a weird rotating door of relationships.” 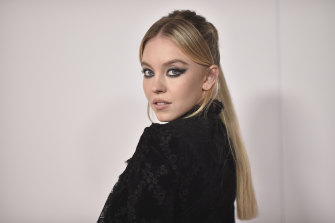 She loves Sally Rooney.
Much like her character Olivia in The White Lotus, Sweeney loves to read. But where Olivia’s tastes were highbrow – The Portable Nietzsche by the pool – Sweeney opts for a little bit of everything.

“I’m all over the place, reading sci-fi, a bit of young adult and a few biopics; I also read Conversations With Friends by Sally Rooney recently too, which I enjoyed.”

So then she starred in an actual music video.
“I told my team I was interested in shooting a clip, and by the end of that week, my agent called me and was like Halsey wants to meet you and do a music video with you,” recalls Sweeney.

Which led to a beautiful friendship with Halsey.
“I had been a huge fan of her music, we filmed the clip for Graveyard and then became close, and now we’re in a wonderful friendship which is so special.”

And her next gig on HBO.
Sweeney and her pop star pal are now set to star in the HBO Max series The Players Table, the first series produced by Sweeney’s production company, Fifty-Fifty Films.

“Producing has always been something that intrigued me, so being able to develop projects from scratch is very creatively fulfilling to me,” says Sweeney.

Her Spotify playlists are unnamed.
“I’ve created a bunch of Spotify playlists for all my different vibes, but none of them have names,” says Sweeney, scrolling through her phone. “I have a ’70s country playlist, an Aretha Franklin playlist to pump me up, and then I have a soppy love song playlist for when I am in my feelings.”

She moonlights as a mechanic.
If the acting thing doesn’t work out, Sweeney has a backup career ready to go: mechanic.

The actress grew up fixing cars and even has a dedicated car TikTok account (@syds_garage) where she restores classic models.

“It lets me step into another world, you’re putting on gloves, getting dirty and doing work, so it’s a grounding thing for me,” says Sweeney.

So changing a tyre is no issue.
”When I got my permit, one of the first things my mother told me to do was pull over, get out of the car and change the tyre,” laughs Sweeney. “I was so mad because there was nothing wrong with the tyre, but she wouldn’t let me back in the car until I changed it; she wanted me to have the skills.”

During lockdown, she got creative.
”This artwork behind me is a COVID project of mine,” explains Sweeney, shuffling out of frame to reveal a large canvas. “I can’t bear to throw away old scripts so I took the pages from the pilot, and paper mache’d them onto this canvas.”

But also did some bingeing.
“I also binged The Sopranos, I have never seen it before, and I watched it, and now I can’t wait for the prequel, The Many Saints of Newark.”

Night Teeth is available on Netflix from October 20.