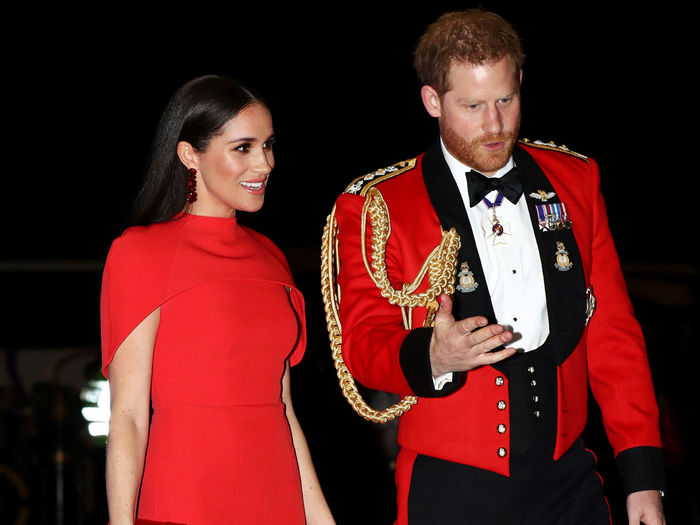 It's no secret that celebrities love to wear matching outfits.

Whether it's wearing similar pastel suits like Maisie Williams and Reuben Selby did at the Thom Browne show during Paris Fashion Week, or matching in the same color like Prince Harry and Meghan Markle did at the 2020 Mountbatten Festival of Music, here are some of the best fashion moments of 2020 — so far.

In January, Zayn Malik and Gigi Hadid were photographed wearing the same green color while out in New York City. 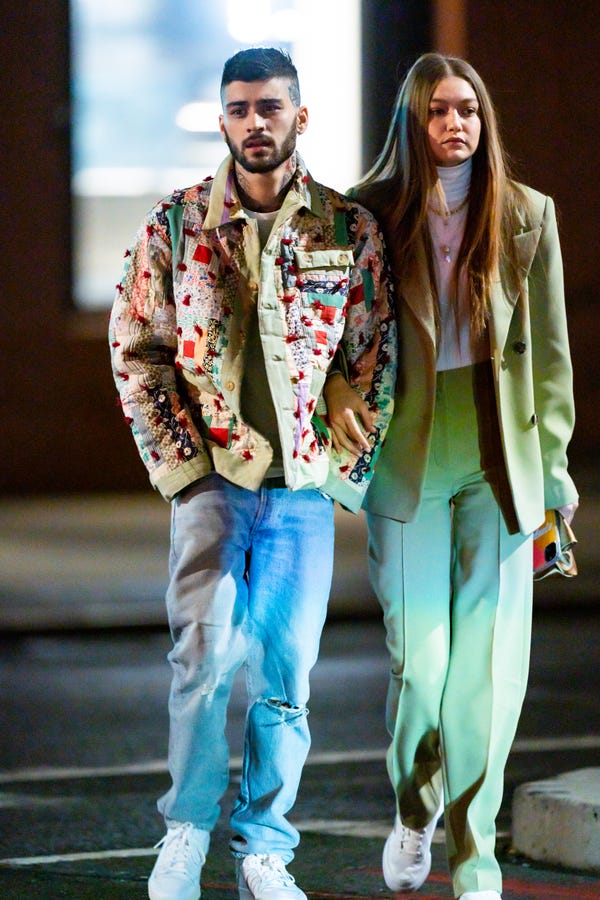 The model wore a matching Lesyanebo set that consisted of a $607 oversized jacket and $377 pants. She paired the look with a $250 Wolford bodysuit, $70 Reebok club c sneakers, and a $295 Alexander Wang lunch bag satin clutch that was sold out at the time of writing.

During Paris Fashion Week in March, Maisie Williams and her boyfriend, Reuben Selby, both wore pastel suits to the Thom Browne show. 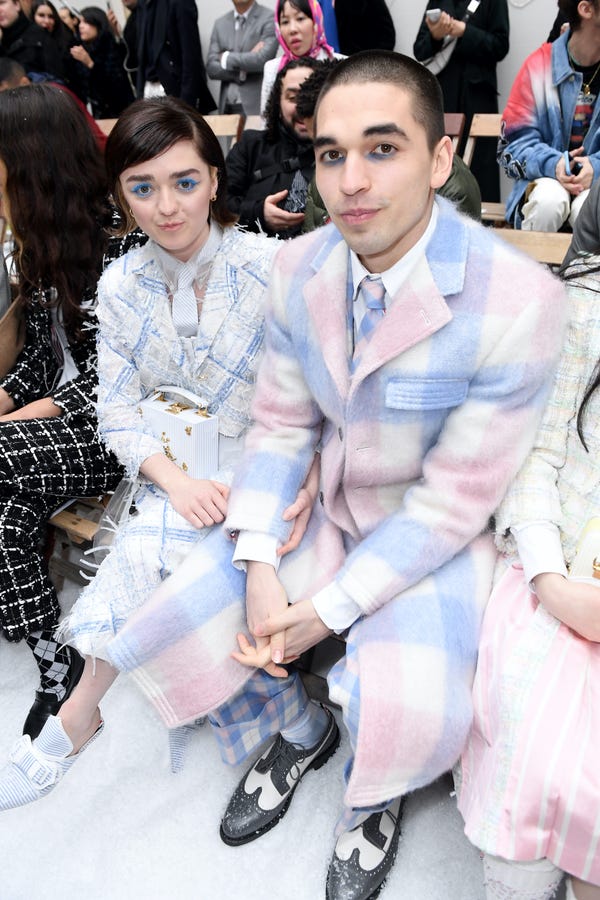 The couple wore matching pastel suits from the designer. Williams paired the look with a pinstripe tie, matching mules, and a boxy purse.

Selby, on the other hand, wore a periwinkle and pink overcoat that matched his pants and tie. He paired the look with gray-and-white oxford shoes. 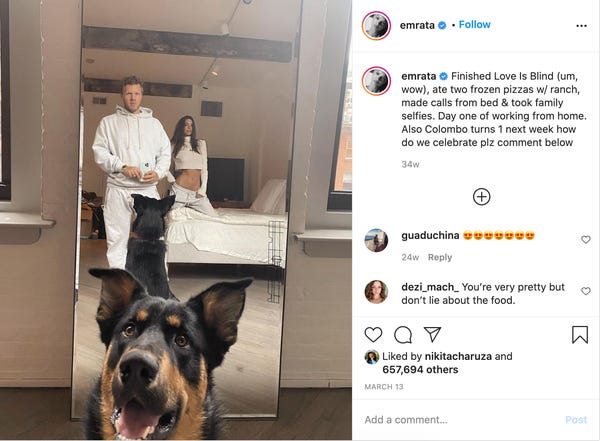 The Duke and Duchess of Sussex looked stunning in blue at the 2020 Endeavour Fund Awards in March. 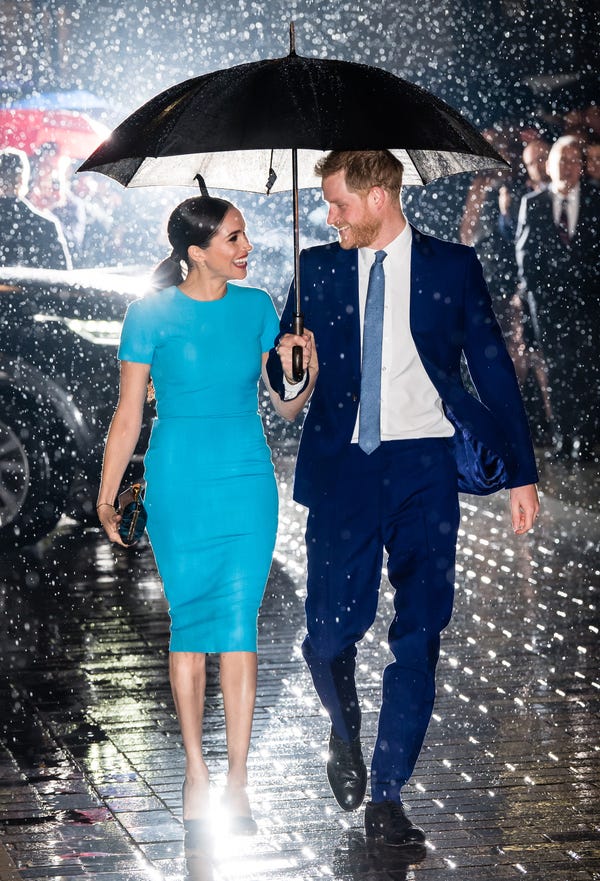 For the event, Markle wore a bright blue, $1,285 Victoria Beckham dress. She completed the look with a Stella McCartney clutch and navy suede Manolo Blahnik pumps. Prince Harry was right by her side looking dapper in a navy-blue suit and a blue tie.

In March, Prince Harry and Meghan Markle stunned when they both wore red to the 2020 Mountbatten Festival of Music. 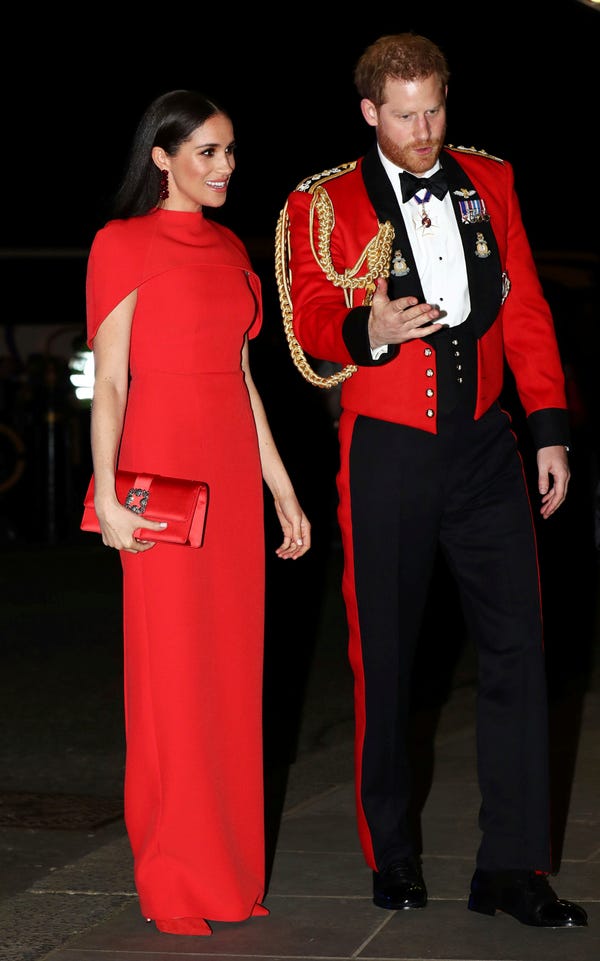 Harry wore his royal uniform, which signifies his military ranking as Captain General of the Royal Marines. Markle matched him in a $1,693 floor-length red gown by Safiyaa, which she paired with a matching Manolo Blahnik clutch and Simone Rocha crystal beaded drop earrings.

For the 2020 Truth Awards in March, Dwyane Wade, Gabrielle Union, and their daughter, Zaya Wade, all wore coordinating suits. 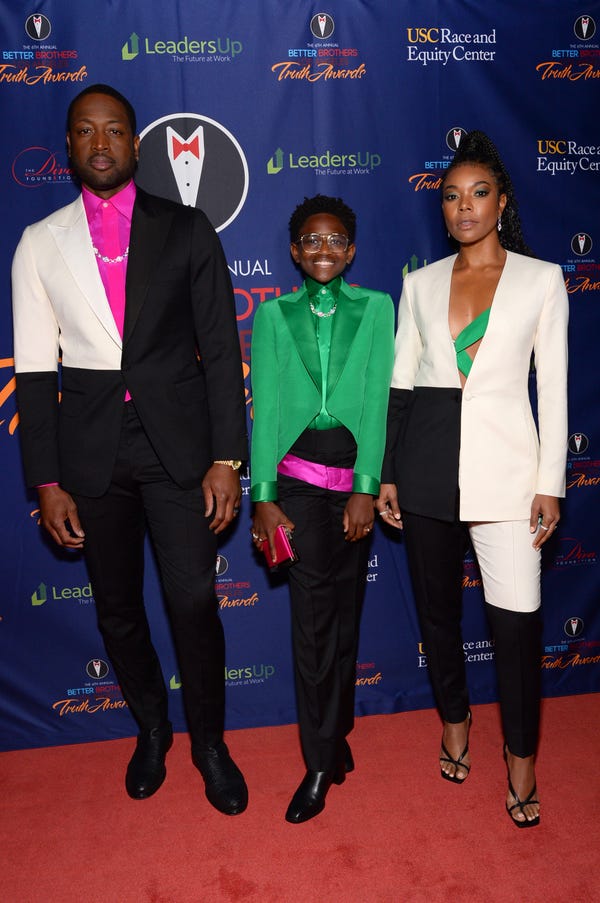 Wade shared on Twitter that it was Zaya who decided on the colors for the look: lavender, white, and green, which also make up the genderqueer flag. The trio wore geometric suits designed by tailor RichFresh.

Dwayne Wade wore a black-and-white color block suit jacket with a fuchsia button-down, while Union matched in a similar blazer and pants with a cutout green top. Zaya, who spoke about her gender identity for the first time in February, wore a combination of both looks: a green tuxedo jacket and shirt paired with black-and-pink pants.

For their final royal appearance in March, Prince Harry and Markle's outfits both featured green. 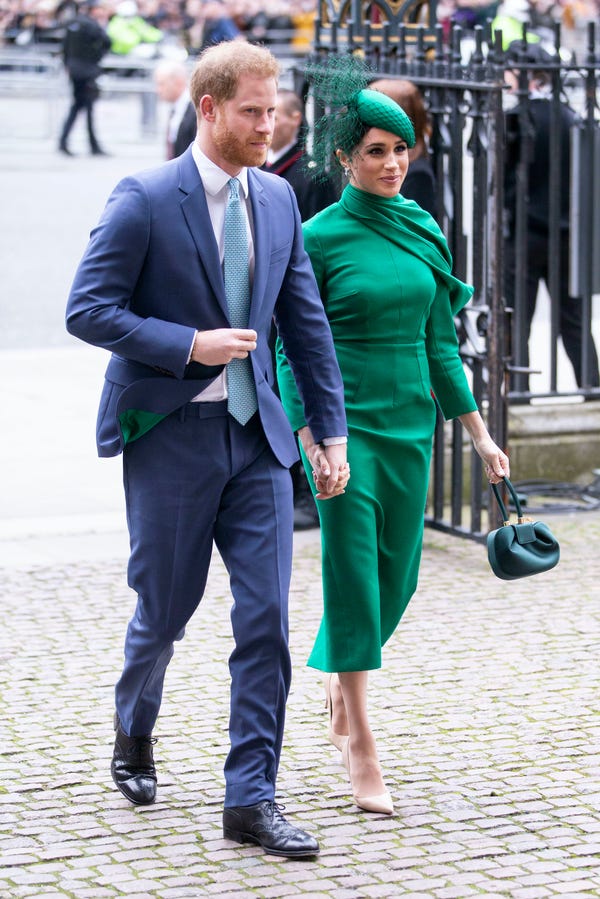 Although Harry wore a blue suit, the lining of his jacket was the same emerald color of the Emilia Wickstead cape dress and matching William Chambers fascinator that Markle wore to the Commonwealth Day service. This appearance marked their final public engagement as senior members of the royal family. 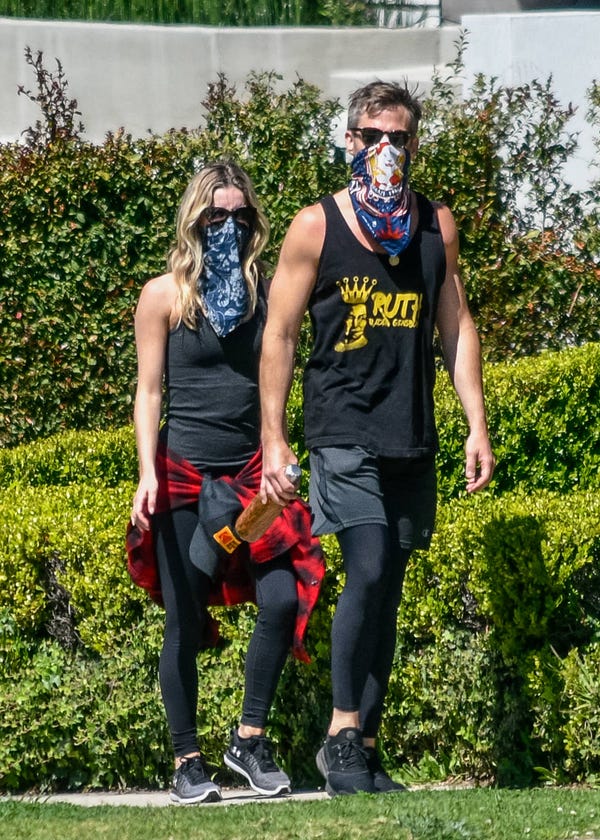 Pine and Wallis were both wearing leggings and black tank tops when they were seen out in Los Angeles, California.

Selby's suit at the Monte-Carlo Gala matched the black of Williams' Dior dress. 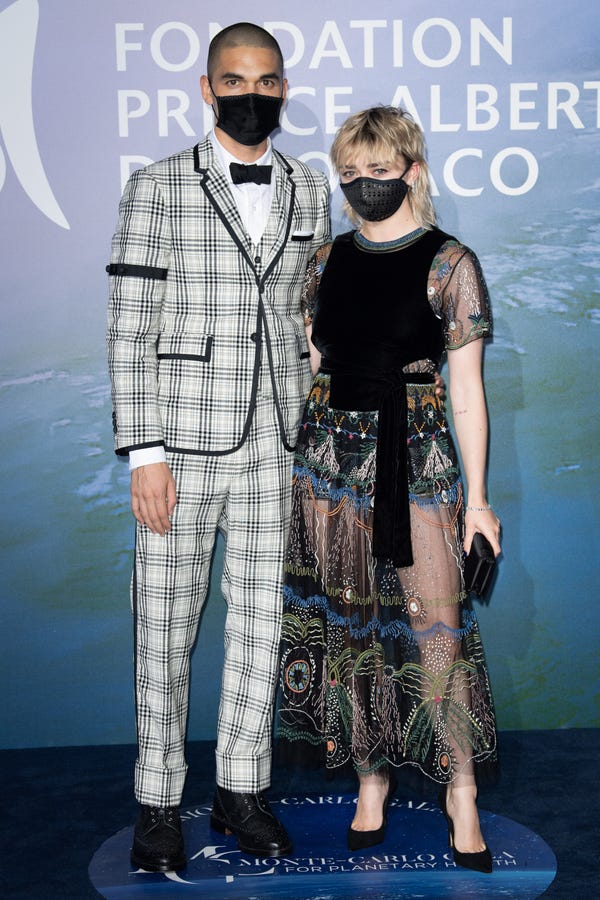 Williams paired her sheer Dior dress with Cartier jewelry and an Azzedine Alaïa mask, while Selby looked dapper in a Thom Browne outfit.

Williams and Selby matched again when they arrived at the Dior fashion show in September wearing coats in similar colors. 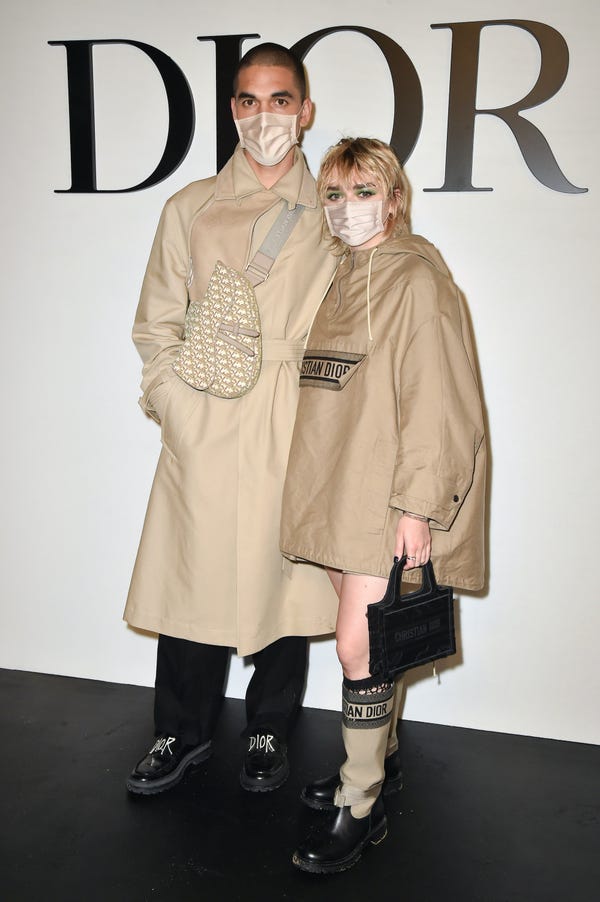 Williams wore an anorak jacket as a dress with rain boots, while her boyfriend wore a trench coat with black trousers and dress shoes.