Clubbed Thumb is a small New York theater company committed to “funny, strange and provocative” new plays, no more than 90 minutes long, by living American writers whose “questioning, formally inventive, theatrical” work features “substantial and challenging roles for all genders” as well as — here’s the killer — “a sense of humor.”

A tall order, yet Clubbed Thumb has hit that sweet spot astonishingly often, in works like “Men in Boats,” “Of Government,” “Wilder Gone,” “Lunch Bunch” and “Tumacho,” to name just one in each of the past five years. Alas, “Tumacho,” a horse opera featuring a chorus of cactuses, was the last we heard from the company. The show opened on March 2, 2020, and closed, with the rest of the theater world, 10 days later.

Now, like some kind of belated dramaturgical groundhog, Clubbed Thumb returns with “The Woman’s Party,” by Rinne B. Groff, to predict more funny-strange theater ahead. Directed by Tara Ahmadinejad and available online through Aug. 31, it checks off every item on the company’s wish list, and then one more: It’s historical.

I don’t just mean that it’s momentous, though in some ways it is, if something so nearly silly can also be nearly profound. I mean that it is based closely — and yet imaginatively — on the true story of an important turning point in the American struggle for equal rights. In 1947, the National Woman’s Party, which almost three decades earlier had secured passage of women’s suffrage in the United States, stood on the brink of an even bigger victory: the passage of the Equal Rights Amendment.

Yes, and as Groff unpacks the reasons such a victory did not pan out, we quickly come to recognize the internal conflicts that have painfully delayed, and in some cases undone, so many breakthroughs ever since. 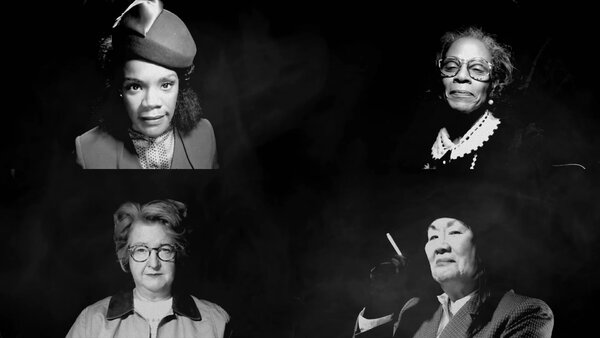 In the case of the National Woman’s Party, founded in 1916 by Alice Paul and Lucy Burns, part of the conflict was generational. By 1947, with Paul long ensconced as the organization’s center of power — even if her power was nominally delegated to others — a struggle had broken out between her supporters and those who felt that new strategies and new blood were required to win the E.R.A. battle. How a progressive like Paul (who actually wrote the amendment) came to be perceived as a reactionary is one of the many paradoxes Groff neatly sets up.

That setup is engineered into the play’s three-part structure. In Part One, we meet most of the relevant characters — all women over 50 — who are either planning a “coup” at the organization’s headquarters in Washington or looking for ways to foil it. The plotters want the party to embrace a broader agenda than just equal rights and a broader population than just wealthy white women; Paul’s cadre wants to limit their efforts to winning, at whatever cost to coalition building and diversity.

Though the casting is mostly colorblind, it remains notable that Doris Stevens, Paul’s protégée and the leader of the uprising, is played by Rosalyn Colman, a Black actor. Groff introduces her as a noir antiheroine blowing smoke rings while jazz plays, suggesting a challenge to the establishment both of its time and beyond it. In Colman’s canny performance, Stevens is also complicated enough to undermine the authenticity of her stated motives; though a fan of Freudian analysis, she fails to notice that she has scheduled the takeover on her mentor’s birthday, Jan. 11.

In Part Two, the coup occurs, to some degree based on the actual events of that night, including the singing of hymns, an emergency call to the Pinkertons and the repurposing of ironing boards as battering rams. Groff, juggling 10 characters, sometimes creates a blur, but the fine cast (including Alma Cuervo, Laura Esterman and Lizan Mitchell) corrects for that problem with stylish semi-caricatures.

In any case, as seen in Zoom-like boxes representing various rooms in the headquarters — the ingenious virtual dollhouse set is by the design collective called dots — the women are perfectly clear in their allegiances, even if they are hopelessly divided within them.

Groff’s dialogue, tying and untying ideological knots as she sketches their positions, keeps what could be leaden exposition bubbling. (So does Ahmadinejad’s sprightly pacing.) Gradually the knots coalesce into one giant tangle as the story builds to Part Three and the final confrontation between Stevens and Paul, played by the fantastically dry Rebecca Schull in a bathrobe.

Here the play expands in several useful directions. One leads to a Shavian orgasm of argumentation, with its Jenga-like pileup of rhetoric that dares you to agree, and then deconstruct that agreement, at every turn.

“Shouldn’t the organization we create recapitulate the principles we stand for?” Stevens asks.

“No,” Paul answers. “The organization we create should achieve the principles we stand for.”

Another direction, speaking to the “strange” and “formally inventive” parts of Clubbed Thumb’s agenda, extends the play’s metatheatrics and anachronisms into haunting new territory. Earlier in the story, when characters slyly acknowledged that they were actors in a play, the excuse for it seemed to be humor — a good enough excuse in my book.

But now, as Stevens and Paul divulge to one another what will happen deep in the future, the effect is more biting. Paul, who as she lay dying in 1977 assumed the E.R.A. would soon be law, is crushed to be given a premonition of the truth in 1947. And Stevens, learning of her own subsequent dabblings in red-baiting and nativism, must look at her attempted overthrow of the party in a new, less flattering context.

To the extent “The Woman’s Party” asks us, too, to re-examine our activist strategies in light of our societal goals — and vice versa — this is bracing political theater. But it is also theatrical politics, in the sense that it asks us to consider the role of drama in a time of upheaval.

That’s why Groff, who in plays like “The Ruby Sunrise” often uses historical change to examine current conflict, is such a good fit for Clubbed Thumb. Over the last decade, and particularly over the last year, playmakers have been struggling to balance the traditional values of dramatic beauty and entertainment with the need to address, in radical terms, a radical moment.

“The Woman’s Party” not only tells a story about that struggle but also, with its wit and light hand, and even its occasional raggedness, is a fine new example of it.

The Woman’s Party
Through Aug. 31; clubbedthumb.org