One of the headliners of the New York Philharmonic’s fall gala last month was Leonard Bernstein, leading his old orchestra in the overture to “Candide.”

Yes, Bernstein died three decades ago. But since the gala, like so much else, was forced to go remote, the Philharmonic had some fun with the format, filming its current players performing to historical footage of Bernstein wielding his baton. The virtual gala had some advantages: it cost less to produce, with no catering, linen rentals and flower arrangements for a black-tie audience, and it reached some 90,000 people, while the concert hall holds around 2,700.

But when it came to the bottom line, the picture was less rosy. The virtual event raised less than a third of what the gala concert took in last year: $1.1 million, down from $3.6 million, a vivid illustration of the steep challenge of raising money for the arts during a global pandemic.

With little or no earned income coming in amid canceled performances and proscribed public gatherings, nonprofit cultural institutions across the nation are scrambling to attract a source of revenue that is often even more important to their bottom lines: philanthropy. Now, as they anxiously await the results of their year-end appeals for donations, they are facing competition from pressing causes including hunger, health care and social justice.

“I am pedaling quickly to try to make sure that we can try to figure out how to make it through,” said Deborah F. Rutter, the president of the Kennedy Center in Washington, which ended its fiscal year on Sept. 30 with a $500,000 deficit compared to last year’s balanced budget. “We are heavily dependent on contributed revenues to survive.”

The going has, indeed, been rough. Box office revenues for many institutions have fallen off a cliff: ticket sales for performing arts groups in the United States were down 96.3 percent in November compared to that month last year, according to a report released last month by the analytics group TRG Arts. And donations do not appear to be making up the difference.

Despite an outpouring of contributions when the virus first struck, individual giving to arts organizations fell by 14 percent in North America during the first nine months of the year, the group found in another report. The average size of gifts from the most active, loyal patrons fell by 38 percent, the survey found. 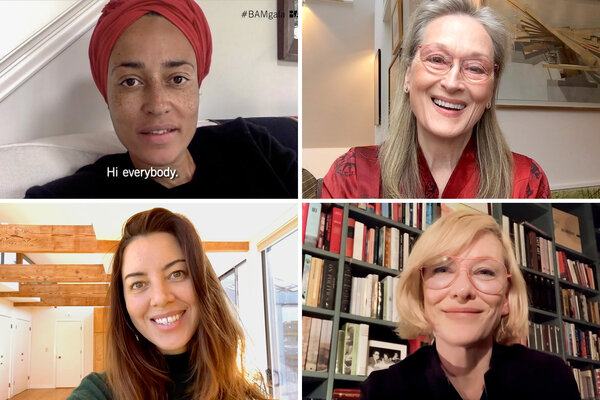 A survey of performing arts administrators by the publication Inside Philanthropy found 45 percent reporting “reduced funder interest and resources as a result of the current shifting of funds for Covid and racial justice.”

“It’s a long way to make up for the gap, and I think we should all be realistic about the fact that this is nowhere near a substitute,” said Henry Timms, the president of Lincoln Center, who helped develop #GivingTuesday in 2012, a day to encourage philanthropy on the Tuesday after Thanksgiving. But he added that “when the traditional fund-raising vehicles return, a lot of us will have also learned some new digital tricks.”

Among those tricks: New York City Center has invited audiences to “Make Someone Happy” this holiday season by sending as a gift (for $35) digital access to its Evening With Audra McDonald, available on demand through Jan. 3. And earlier this month, Ars Nova, an artists incubator in New York, raised more than $400,000 during its 24-hour livestream telethon, which featured more than 200 artists.

Museums are struggling to raise funds in the absence of events, and because they were forced to close during the first few months of the pandemic. “We count on the front door for about 30 percent of the budget, so to lose that in one fell swoop is perilous,” said Richard Armstrong, the director of the Solomon R. Guggenheim Museum, which is projecting a $13 million deficit and had to cancel a potentially high-traffic Joan Mitchell touring retrospective because the timing no longer worked.

Rather than pivot to a virtual gala, the Guggenheim decided to scrap that event altogether — instead inviting donations to a “Gala Fund” — in part because of Zoom fatigue and because online programming had not been a strong point.

“We were a little far behind on virtual previously, so we had to catch up and we’re still figuring that out,” Mr. Armstrong said. “We certainly put out a lot of content in the seven months. We’ve learned, I think better, how to make the online museum more comparable to the physical space.”

New York City Ballet and the School of American Ballet typically hold a benefit each year after a Saturday matinee of “George Balanchine’s The Nutcracker,” followed by a backstage tour and party on the promenade of the David H. Koch Theater. This year they went online.

The principal dancer Tiler Peck gave a backstage tour, told the story of the ballet and performed an excerpt. People who purchased benefit tickets received treats delivered to their homes, and were able to interact with dancers on Zoom. Dancers, in costume, were streamed live from their theater dressing rooms, where they did makeup demonstrations, talked about their characters and answered questions. And attendees received a free link to watch the company performing the full ballet on marquee.tv through Jan. 3.

But many arts institutions must navigate a sensitive fund-raising climate — making the case for culture as a worthy cause, while remaining mindful of the international health crisis, rising hunger and a national reckoning around racial and social justice.

“We were careful not to be overreaching, allowing partner organizations to do what they had to do, like United Way or other community service organizations that were literally dealing with life and death situations,” Mark A. Davidoff, the chairman of the Detroit Symphony Orchestra, said. “How much is enough, and how much might be too much?”

This month’s annual summit of the Arts Funders Forum, which aims to increase private funding for arts and culture in the United States, emphasized how arts institutions need to demonstrate to donors what they are doing to drive social change.

“Of the causes that Americans of all generations do support,” said Melissa Cowley Wolf, director of the forum, during her opening remarks, “arts and culture do not make the top seven.”

Many nonprofit institutions are hoping to apply for aid available in the stimulus bill that President Trump signed Sunday night.

Amid the crisis, some foundations are stepping in to try to help keep institutions afloat, and large organizations are seeking emergency support from their boards.

Virtual fund-raising has benefited a bit from the fact that people are stuck at home, making them eager for engagement as well as less heavily scheduled.

“People have the bandwidth for those kinds of conversations,” Ms. Rutter, of the Kennedy Center, said. “In the past, it would be like, ‘Let’s get together for lunch,’ and it would take six months to get it on the calendar. Now it’s like, ‘I’m free tomorrow.’”

Still, fund-raising challenges remain formidable. What is typically a subtle dance — we’ll give you this perk, if you give us your dollars — has now become a more brazen cry for help.

This month, the Metropolitan Museum of Art placed donation boxes in the lobby of its Fifth Avenue entrance: “Please give to The Met to help us connect others to the power of art.” The Detroit Symphony launched what it is calling a Resilience Fund “to ensure that our world-class orchestra keeps the music playing for our community during the Covid-19 crisis and beyond.”

The New York Philharmonic has established the “It Takes an Orchestra Challenge,” trying to raise $1.5 million by Dec. 31. David M. Ratzan, a New Yorker who typically takes his son to several concerts a year, contributed $100. “If people don’t pitch in,” he said, “these places won’t exist.”

The orchestra was forced to cancel its entire current season, and this month its musicians agreed to substantial salary cuts as its administration was reorganized to allow Deborah Borda, its president and chief executive, to focus on two priorities: renovating David Geffen Hall, its Lincoln Center home, and fund-raising.

“It’s an incredibly serious situation,” Ms. Borda said. “Our last concert was March 10 and we can’t play this entire year and then the next question is, looking forward, what will happen in the fall of 2021? What is going to happen with the vaccine? How comfortable will people feel about coming back?”

Given this uncertainty, cultural executives still find themselves far outside the bounds of the traditional arts management playbook.

“I’m not talking about whether Yo-Yo is available,” said Mark Volpe, the chief executive of the Boston Symphony, referring to the cellist Yo-Yo Ma, and noting that the symphony would typically have started selling tickets for its summer Tanglewood season in November. “I’m talking about what the future is going to be.”