Much as I look forward to spending time with my granddaughter each week, Thursdays can feel long.

I board the commuter train in my New Jersey town at 8:14 a.m., switch to the subway in Manhattan and reach my daughter’s apartment in Brooklyn by 10. Bartola, who’s nearly 3, comes hurtling down the hallway to greet me. (That’s a family nickname, a nod to the former Mets pitcher Bartolo Colon.)

My Bubbe Day shift (it’s Yiddish for grandma) lasts until 6. By the time her parents take over and I trek back home, roughly 12 hours have passed.

But that’s nothing compared to the time that Bill Borbely, 65, a retired marketing executive, puts in. When his daughter and son-in-law announced their first pregnancy, he recalled, “I said, ‘You don’t have to worry about day care.’ And they haven’t.”

He’s on the job Monday through Thursday in Point Pleasant, N.J., caring for two granddaughters, ages 5 and 3, for a total of 26.5 hours. Because I want Bartola to see that everyone shares in home tasks, she “helps” me unload the dishwasher and do her laundry. Mr. Borbely, however, has been known to mow his kids’ lawn.

Maybe Carol Hewitt tops us both. As her daughter and son-in-law in the Bay Area debated whether to have children. “I said, ‘Go for it, get pregnant. I’ll watch the kids.’”

In 2014, the year her daughter gave birth to twins and Ms. Hewitt turned 65, she’d been traveling back and forth from Kentucky, where she was involved in a relationship, but resettled in California to care for her grandchildren three times a week until they began school. She’s still providing after-school, sick day, summer and date-night babysitting.

Sociologists have developed a name for this contribution: “intensive grandparenting.” It refers not to a particular number of hours, but to a commitment to providing regular child care, often accompanied by housekeeping or other tasks. Ms. Hewitt, Mr. Borbely and I — and a whole lot of others — qualify. 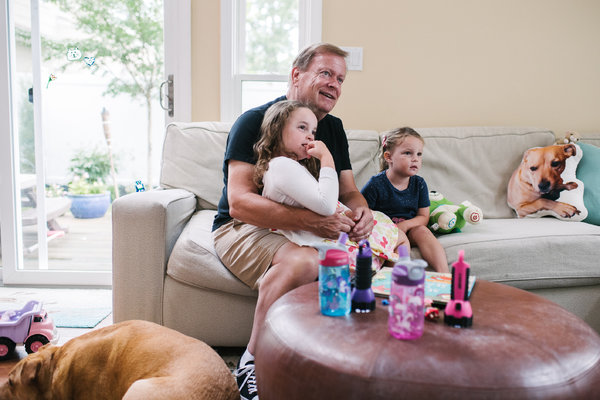 We are not, I hasten to add, complaining. “I have incredible gratitude that my daughter and son-in-law have trusted me to help raise their children,” Ms. Hewitt said.

Agreed. I feel lucky to live nearby enough to nurture a close relationship with Bartola and to backstop her harried working parents.

Still, these arrangements — leaving aside those heroes actually raising their grandchildren — differ from the way we’ve typically pictured grandparenthood.

“There’s this stereotype: Ice cream! Fun trips to the zoo!” said Jennifer Utrata, a sociologist at the University of Puget Sound who’s researching intensive grandparenting. “But there’s all this invisible labor behind the scenes.”

How much? Hard to pinpoint, but a recent study reports that about half of young children, a third of those in elementary school and even 20 percent of teenagers spend at least some time with grandparents in a typical week.

Madonna Harrington Meyer, a sociologist at Syracuse University and author of “Grandmothers at Work,” analyzed federal data for grandparents aged 51 to 70 who had jobs, most working full-time. About 45 percent had provided care for grandchildren during the previous two years, a proportion she expects to increase.

In part, this pattern reflects the changing expectations of parenting itself.

“My mom told the seven of us to go outside and play,” Dr. Harrington Meyer recalled. “Today’s mom says, ‘Get in the van and I’ll drive you from Spanish camp to violin lessons.’ The idea is to cultivate your child, give them every possible advantage, and it clearly spills over to the intensification of grandparenting.”

This helps explain why Kristi Denton Cohen, 67, and her husband, Tom Cohen, 72, who ferry four grandkids around Marin County, Calif., for after-school activities, jokingly refer to themselves as Grandma Lyft and Grandpa Uber.

But the trend toward intensive grandparenting also serves as an indictment of a country that pays lip service to families while providing little real support.

When Stacy Rubenstein, a public relations manager in suburban Chicago, had a son almost seven years ago, she was working for a company too small to be covered by the federal Family and Medical Leave Act (which in any case mandates only unpaid leave).

She patched together four weeks off, using vacation time and an unpaid break, then returned to work. Some local day care centers were charging $2,000 a month for infants. “That’s another mortgage payment,” she lamented.

Who ya gonna call?

“My mom was gracious enough to step in and help us out a few days a week,” said Ms. Rubenstein, 32. “She had her own work to do, but she had him in tow.” Though he’s in school now, “on holidays and vacations and random teacher-training days, my mom still helps out.”

This little boy’s grandma would probably say, as most do, that she cherishes her time with him — the “joy narrative,” Dr. Utrata calls it.

But she has interviewed about 50 intensive grandparents for her research, and “many tell me it’s not all joy. You feel tired, often. You feel you can’t say no. A lot worry about their adult children keeping their jobs, about their marriages, their financial stability.”

Tired, oh yes. I was literally half my current age the last time I was chasing a 3-year-old. Thursday nights, I come reeling off the train and into my local pizzeria for dinner, because even opening my refrigerator requires too much energy.

But experts worry more about people who cut back on work hours, retire too early or otherwise imperil their own financial security to provide intensive grandparenting.

Ms. Hewitt, for instance, left her job at a university child care center and applied for Social Security benefits five years ago, giving herself an income while granny-nannying. Had she waited and applied now, she acknowledged, she would receive $1,000 more a month.

Grandparents told me, too, of shelving their own projects and interests to care for grandkids. They may lose social connections, an important factor in older adults’ psychological and physical well-being.

“Many grandparents think it’s great to do child care for a day or two,” Dr. Utrata said. “Then it escalates and suddenly the grandparents aren’t going to exercise class or keeping up with friends.”

Pressure from adult children can also render the experience less than joyful. Ditto, tensions with a spouse who hadn’t planned to spend retirement driving kids around (again).

Attention, parents: Letting your parents know how much you appreciate their intensive grandparenting goes a long way toward maintaining or re-establishing joy.

“One of the kindest ways adult children showed gratitude was to keep asking: ‘Are you too tired, Grandma? Do we need to adjust the schedule?’” Dr. Harrington Meyer said. “If Grandma and Grandpa feel appreciated, they’re less tired and anxious and stressed.”

My own reward is stuff like Bartola teaching me the song she invented, to the tune of “You Are My Sunshine,” about butts. (Don’t ask.) I get lots of parental hugs and thank-you’s, too.

Because I have one child who has one child, I also know that this period of peak child care demand has a built-in time limit.

This fall, when Bartola goes to preschool, she’ll no longer require Bubbe Day. She’ll need after-school care, and I’m planning to pick her up and walk her home two afternoons a week.

This may result in my eating more pizza than is good for me. But it’s where I want to be, what I want to do.