Back in March, the actress Kelli O’Hara arrived on Rhode Island’s Gold Coast. A company of theater heroes, with enough combined Tonys to crowd a mansion’s mantels, met her there. “It was almost like Broadway said, ‘We’re shutting down,’” O’Hara recalled during a recent telephone interview. “So 20 of us got together and said, ‘Let’s go do a play in a seaside town.’”

But O’Hara — and colleagues like Christine Baranski, Nathan Lane, Debra Monk and Cynthia Nixon — hadn’t come to Newport to for a summer stock job. Or even for the clam cakes. They were on location for “The Gilded Age,” a robber baron costume drama from Julian Fellowes that will premiere on HBO in 2022.

With Broadway theaters closed since last April, “The Gilded Age” joins current series like “The Good Fight,” “Younger” and “Billions” and upcoming ones like “The Bite” and a “Gossip Girl” reboot in providing a glitzy refuge for theater stars during the shutdown. Broadway performers have always appeared here and there on scripted series. (No 2000s Playbill bio was complete without a “Law & Order” credit.) But this past year, television work — which is typically better paid than theater and more luxurious in its perks — was pretty much the only show in town. 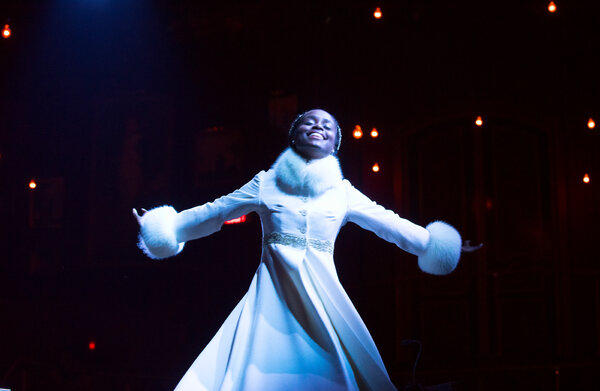 “People are just really excited to be working and to have human contact and to be on set and telling a story again,” Allison Estrin, the casting director of “Billions,” said. “Every actor I’ve talked to has just expressed nothing but gratitude and excitement for being able to work right now.”

And because every stage actor was suddenly available, television has never seemed so theatrical. (You could cast a credible Sondheim revival with actors on “The Good Fight” alone.) Will television ever look the same? Will Broadway?

A year or so ago, casting directors would have had to compete with — or maneuver around — Broadway commitments. “It was always a scheduling nightmare to work around people’s curtain times,” Robert King, a creator of “The Good Wife” and “The Bite” said.

“Sorry to say it, but it worked for us,” he added about the shutdown, “because we could schedule more freely.”

Tavi Gevinson and Adam Chanler-Berat, stars of the new “Gossip Girl,” had both committed to a revival of the Stephen Sondheim musical “Assassins.” “We were going to work overtime and do back flips to make it work for them,” Cassandra Kulukundis, the “Gossip Girl” casting director, said. The pandemic put an end to back flips. Did that make Kulukundis’s life easier?

“It made my life sad,” she said. “I want to see those people working.”

Although some shows had completed casting before Covid-19 hit New York, many have stepped up with an express desire to employ stage actors. “Everyone’s aware that it’s a horrible time,” Warren Leight, the showrunner for “Law & Order: Special Victims Unit,” said. “And if you can help out, you do.”

“So I just made the call early on,” he continued: “Let’s make this the year where the first pool of actors we go to is a Broadway actor, the Off Broadway actors.” He estimates that he has employed an average of 10 theater actors — Jelani Alladin, André De Shields, Adriane Lenox and Eva Noblezada among them — per episode this season.

Robert and Michelle King conceived the goofy horror comedy “The Bite,” in part, to keep stage actors working. “Employing people that were out of work from the theater was uppermost in our mind,” Michelle King said. She doesn’t think that the six-episode show, which debuts May 21 on Spectrum, would have worked without stage performers. Filmed comparatively early in the pandemic, it was mostly shot remotely, in actors’ homes.

“Because people are acting by themselves, you really need people that are at the very top of their craft,” she said. “If we hadn’t had access to those people, the show wouldn’t have come together creatively.”

For Steven Pasquale, a Broadway veteran who was also slated for the “Assassins” revival, “The Bite” provided a welcome alternative. “It felt a little bit like we were making theater, even though we were making a TV show, because there were so many theater people involved.”

“The Gilded Age,” which employs 17 Tony winners and nominees in its cast, had a similar put-on-a-show ethos. “There is something about theater actors on a television set,” said Audra McDonald, a six-time Tony winner and a star of “Gilded,” “The Bite” and “The Good Fight.” “It feels like it’s a repertory company.”

Nixon said that “Gilded” had brought her back together with theater co-stars from her 20s, 30s, 40s and 50s. During a recent shoot, Nixon recalled, she looked at the cast members in the scene and said to Baranski, “We could totally do ‘The Importance of Being Earnest’ right here.”

This isn’t to suggest that casting stage performers is an act of charity or an excuse for an impromptu reunion. Yes, Broadway actors may have less on-camera experience than some of their Hollywood counterparts. But they bring an ease with stylized language, as well as a professionalism and can-do attitude that inures them to the hectic rhythms and sudden changes of a television set, especially a set operating under Covid-19 precautions.

“People who work in live theater, where anything can go wrong, they’re always on their toes,” said Kulukundis, the “Gossip Girl” casting director. Christine Baranski, a Tony winner and a star of “The Good Fight” and “The Gilded Age,” put it this way: “We have a skill set and a respect for process. You hire a theater actor and they’ll come in prepared.”

Theater actors are unruffled by specialized jargon. Estrin can always tell when a stage actor walks into the audition room for “Billions.” An exuberant drama set among financiers and the regulators who love-hate them, its current season includes the Tony nominees Daniel Breaker, Stephen Kunken and Sarah Stiles.

“It isn’t easy dialogue to say,” Estrin said. “They walk in the door and make it look easy.”

“Younger,” a pacey comedy set in the world of Manhattan publishing, often relies on musical theater stars to deliver its zingers. “These are actors that are able to make the words sing,” said Steven Jacobs, one of the show’s casting directors.

When it comes to words that people might have used a century ago, stage actors typically have an advantage. Not every film or TV actor has done period work, but theater-trained actors usually have at least a few Shakespeare plays and Shavian comedies under their era-appropriate belts.

“We tend to have experience with having to wrap our mouths around different types of texts,” Denée Benton, a Tony nominee who stars in “The Gilded Age” said. “I’ve spent my entire career in corsets. So when this show came around, I was like, ‘Yeah, I know how to do this.’”

Doing this without giving up theater wasn’t always an option. Back in the ’90s, when Baranski needed to earn more money and decided to seek television roles, she had to move to Los Angeles.

“There wasn’t enough TV work in New York back then,” she said. “Now there is, and it’s a great thing for the theater community. God, I wish it had happened earlier.”

During this lost Broadway season, New York-based series have allowed Broadway talent to keep their health insurance and pay their mortgages without having to uproot their lives. Television has also provided a spiritual solace, a means to practice their art when other modes were unavailable. (Or as in the case of Zoom theater, glitchy and not always satisfying.)

“The creative safety of knowing I’m going to get to use my gifts, the financial safety of knowing that I’m going to be able to pay my bills for a time period, it’s priceless,” Benton said. O’Hara put it even more feelingly. “It’s the most beautiful gift I’ve ever had,” she said of her work on “The Gilded Age.” “It fooled me into thinking I’m still doing theater.”

Mandy Patinkin, a Broadway legend and a series regular in the coming season of “The Good Fight,” tried out retirement last year, after a nearly decade-long run on “Homeland.” He hated it. Returning to television gave him a renewed sense of purpose.

“Part of what Covid taught me, among so many things, was the appreciation of the privilege of having a vocation that would structure my day and my life and my evenings and my time on Earth,” he said.

Slowly, Covid’s heavy curtain is starting to rise. Most of New York’s capacity restrictions, including those governing live theater, are scheduled to end on May 19 with social distancing requirements still in place; Broadway theaters, which depend on tourists and are too expensive to operate with limited audiences, have been cleared to reopen at full capacity beginning on Sept. 14.

But with so many actors having found comfort and health insurance in television in the past year, will they return to the stage?

Even before the pandemic, casting plays and musicals had become more difficult, said Bernard Telsey, a casting director for “The Gilded Age” and a co-artistic director of MCC Theater. “Everyone is wanting to do television now,” he said. This applies as much to younger stage actors as to seasoned ones. “They’re five minutes out of Juilliard, and they’re looking at a television show,” he said.

But there are pleasures — for actors and audiences — that television can’t offer, at least not often and not without a lot of begging first. There are few high Cs on TV, and fewer kick lines. But “Younger” has included a few songs, among them a blissful “9-to-5,” led by Miriam Shor, an original cast member from “Hedwig and the Angry Inch.” There’s also a scene this season in which the series lead, Sutton Foster, dances to a song from “Thoroughly Modern Millie,” a show she starred in.

“I’m always looking for little excuses to see her really step out and perform a little bit,” Darren Star, the creator of “Younger,” said.

McDonald tries to make TV just a little more theatrical. For years, she asked the Kings to write a song into “The Good Fight.” They finally agreed and in the third season, McDonald and Baranski’s characters break into “Raspberry Beret” during late-night case prep.

“We had a ball doing that,” McDonald said. “Because we knew it was as close to a musical number as we would ever get.”