SNOWFALL 10 p.m. on FX. Franklin Saint (Damson Idris), the kingpin-in-training at the center of this 1980s Los Angeles drug tale, returns for a third season under solemn circumstances: one of his creators, the director John Singleton, died in April. Still, Saint’s story rolls on. Season three begins in the summer of 1984, with money pouring in as a result of surging crack cocaine use in the city. As Saint becomes steadily more established as a player in the drug trade, he also draws increasingly more attention from a police sergeant (Marcus Henderson), and has to recognize his complicity in the growth of a blossoming epidemic. 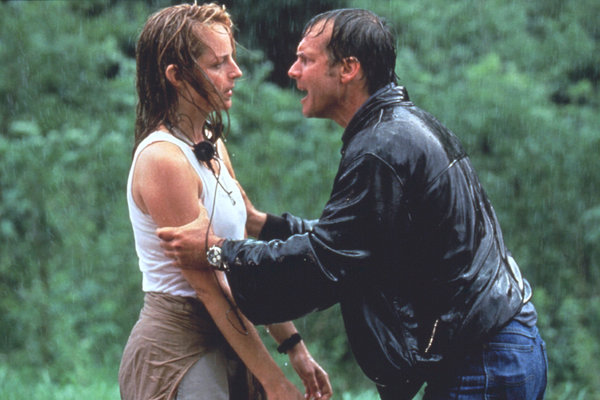 TWISTER (1996) 7:30 p.m. and 11 p.m. on Syfy. A decade before storm chasing became the subject of an ill-fated Discovery Channel reality series, Bill Paxton and Helen Hunt played tornado hunters — who are also a couple on the brink of divorce — in this loud thriller. Jan de Bont, fresh off directing “Speed,” kept his foot on the gas as he brought to life the quick-moving, Oklahoma-set screenplay, written by Michael Crichton and Anne-Marie Martin, which follows Paxton and Hunt’s characters as they deal with maelstroms of both environmental and emotional varieties. In her review for The New York Times, Janet Maslin called the result “a gale-force movie with the energy to blow audiences right out of the theater,” writing that Crichton “delivers his familiar mix of hurtling pace, by-the-numbers character development and exotic science.” Tornado-chasing “suddenly takes on a sex appeal not usually associated with horrendous storms,” she noted.

BATTLE OF THE 80S SUPERCARS WITH DAVID HASSELHOFF 8 p.m. on History. For a more nostalgic view of the ’80s than “Snowfall” will give you, hop over to History and watch David Hasselhoff ogle a bunch of cool cars. The climax of the special is a race in which Hasselhoff goes head-to-head with Erik Estrada and Dirk Benedict.

HARLOTS Stream on Hulu. Samantha Morton and Lesley Manville play warring madams in this period drama, set in the brothels of 18th-century London. The second season finished with what seemed to be an end, as Margaret Wells (Morton) was sent to a mental institution and Lydia Quigley (Manville) was sent to America. The third season, which begins Wednesday, sees Margaret’s eldest daughter, Charlotte (Jessica Brown Findlay) taking on more responsibilities. “‘Harlots’ has a zippy pep, never dwelling too much in its darker realities but also not trying to ignore them completely,” Margaret Lyons wrote on The Times’s Watching website. “It’s a balancing act that mostly works.”

ACROSS 110TH STREET (1972) Rent on Amazon, Google Play, iTunes and YouTube. The actor Paul Benjamin, who died at the end of June, played supporting roles in movies like “Do the Right Thing” and “Escape From Alcatraz.” He was known less as a leading man, but he stars alongside Anthony Quinn and Yaphet Kotto in this crime drama, as the leader of a Harlem bank robbery that goes very awry.