ANIARA (2019) Stream on Hulu; Rent on Amazon, Google Play, iTunes, Vudu and YouTube. This sci-fi drama from the directors Pella Kagerman and Hugo Lilja is based on a downbeat 1956 poem by the Swedish Nobel laureate Harry Martinson. Like its source material, the movie tells a story that is, despite being about humans traveling beyond the confines of earth’s atmosphere, supremely claustrophobic: It centers on a spaceship knocked off course, out of fuel and running out of hope. The crew of the ship, which had left an earth in environmental ruin and was bound for a human colony on Mars, includes MR (Emelie Jonsson), the story’s protagonist, whose situation becomes increasingly grim. “At times, the commitment to bleakness feels artistically admirable,” Teo Bugbee wrote in her review for The New York Times. “The film unblinkingly faces the void, and it refuses to console the audience, which has come along for the ride. But mostly, this is a movie that simulates the experience of losing the will to live, a daunting premise even for the bravest voyagers.”

CLIMATE FORUM 2020 Stream on NBC News Now. Following a town hall on global warming held for Democratic presidential candidates earlier this month by CNN, the Georgetown Institute of Politics and Public Service, MSNBC, the environmental news service Our Daily Planet and New York magazine will host a climate forum at which several candidates will have further opportunity to communicate their views on how to address the issue of climate change. Those scheduled to be in attendance include Senators Bernie Sanders and Cory Booker, Mayor Pete Buttigieg of South Bend, Ind., the former housing secretary Julián Castro, Andrew Yang and Marianne Williamson. The town hall begins livestreaming on Thursday at 10 a.m. EST and will continue on Friday. 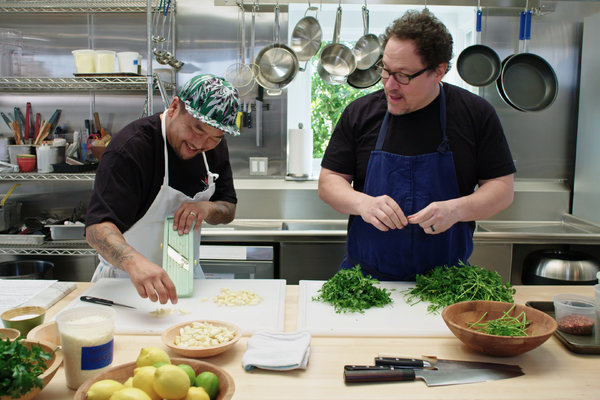 THE CHEF SHOW Stream on Netflix. For all those who have ever dreamed of watching Seth Rogen cut up a full chicken: Great news! You’ll be able to see that happen within the new set of episodes of this cameo-heavy cooking and travel show, which is hosted by the director Jon Favreau and the chef Roy Choi. The new episodes also include a stop at the experimental Los Angeles taco spot Guerrilla Tacos, a lesson in oyster harvesting in Northern California and a visit to Skywalker Ranch in Marin County, Calif. There, the pair visit an on-site garden at which Favreau (who is behind the upcoming Star Wars series “The Mandalorian”) holds out a freshly plucked purple carrot, eliciting a quip from Choi that tidily shows off the pair’s friendly chemistry: “It’s like lightsaber color.”

RETURN TO DOWNTON ABBEY: A GRAND EVENT 8 p.m. on NBC. Many die-hard fans of “Downton Abbey” are likely planning to spend Thursday night at movie theaters, where a film based on that popular PBS historical drama will start hitting screens. Fans who want to continue building the hype instead can opt to watch this hourlong hors d’oeuvre, which features behind-the-scenes interviews with the “Downton Abbey” cast and chats with celebrity fans of the series.

Gabe Cohn writes about television, fine art, film and other topics related to culture and the arts. He joined The Times in 2017.