Meghan Markle and the royal formerly known as Prince Harry have the most epic romance — from their engagement period to their star-studded wedding to announcing they were expecting their first child together and now embarking on their new life in Canada.

Pepper in some major tours in the U.K. and Australia as well as various charitable engagements it’s dizzying to think of all the times we’ve seen these two out and about — from visiting with leaders from Malawi, Mozambique, and Morocco discussing renewable energy, jobs, tourism, and environmental issues to visiting women at The Hubb Community Kitchen in London these two are constantly doing what they can to make the world a better place.

One of the best parts about seeing this couple out and about, though, is how much attention and affection they unabashedly share with each other in public. Sure, they’re not tweeting sweet nothings at each other like John Legend and Chrissy Teigen or commenting on each other’s Instagrams like Kelly Ripa and Mark Consuleos but we couldn’t help but notice there’s plenty of photographic evidence of the loving looks and romantic moments shared between Harry and Meghan.

On that note, here are some of the most romantic photos captured of the royal couple. 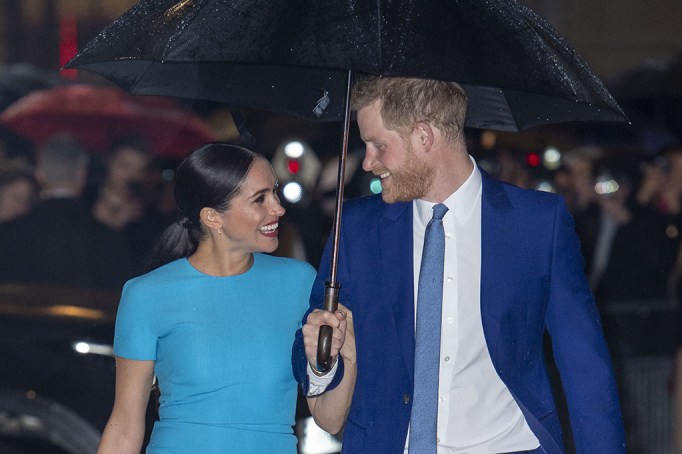 The couple celebrated the achievements of wounded, injured and sick servicemen and women who have taken part in remarkable sporting and adventure challenges over the last year at 4th Endeavour Fund Awards.

Getting Handsy at the 2017 Invictus Games 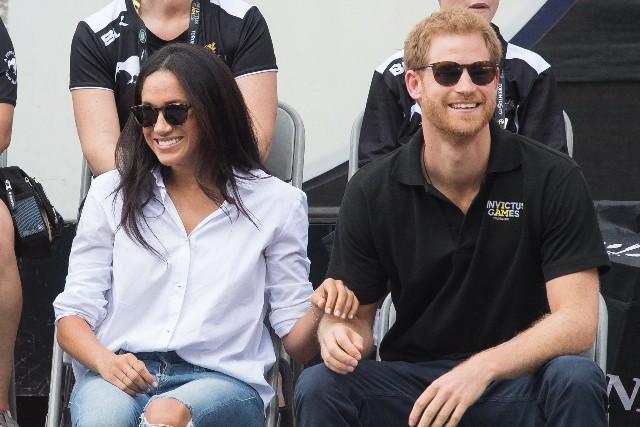 Meghan and Harry made their official royal couple debut at the Invictus Games in Toronto on Sept. 25, 2017. Here was one of the first photos of their “heart eyes” looks — visible even behind the sunglasses.

A Happy Couple at Their Engagement Announcement 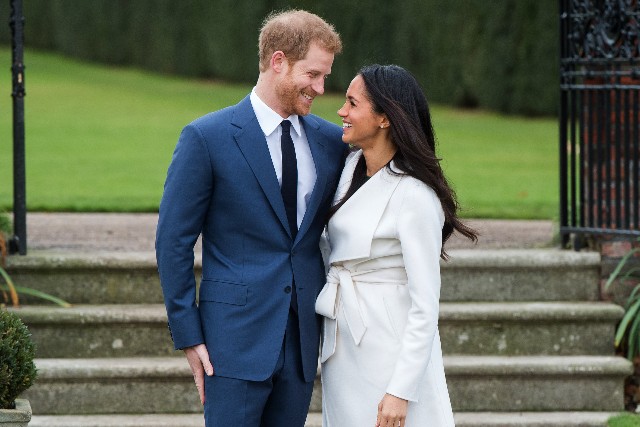 You can practically feel the love radiating through this photo from Harry and Meghan’s engagement announcement photo-call at Kensington Palace. The way they look at one another is the definition of love in our opinion

Laughing Together in Edinburgh 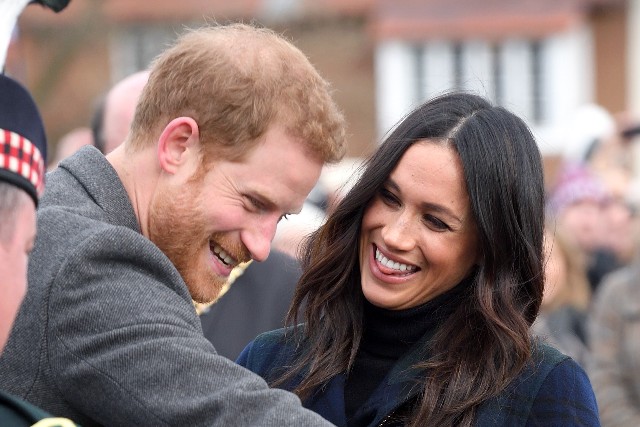 In February 2018, the engaged couple was caught laughing on their first joint trip to Scotland. Look at Meghan’s tongue poking out. What’s better than a couple who makes each other laugh? 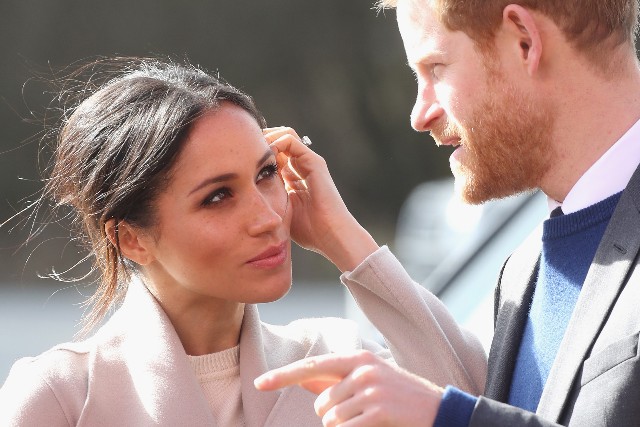 Meghan often looks like she’s enamored with Prince Harry’s words, and who wouldn’t be? Here, the prince and his fiancée visited the Eikon Centre to attend an event to mark the second year of the youth-led peace-building initiative Amazing the Space on March 23, 2018, in Lisburn, Northern Ireland.

Their First Kiss as a Married Couple 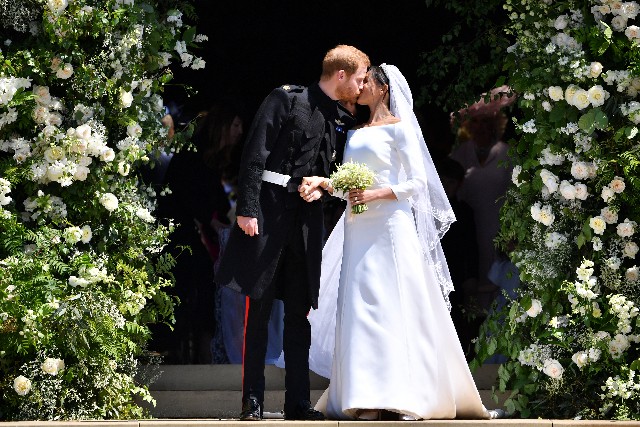 On May 19, the fairy-tale wedding of the century happened at St. George’s Chapel, Windsor Castle. The beautiful ceremony, airing live globally for the world to join in, culminated in a sweet kiss on the steps. They received joyous applause for the PDA. 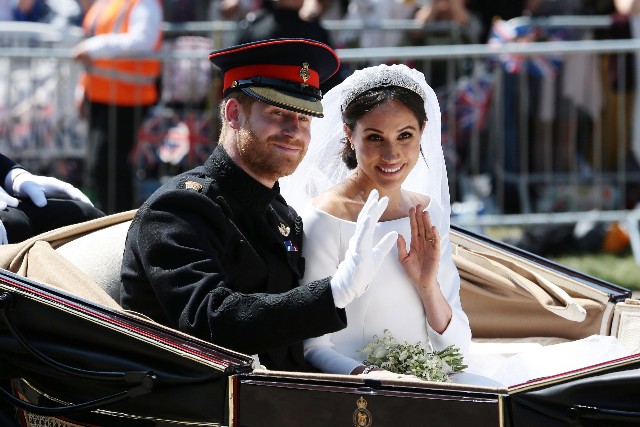 The now-titled Duke and Duchess of Sussex rode away for a carriage procession in England. Literally out of a princess romantic comedy movie.

All Smiles After Their Wedding 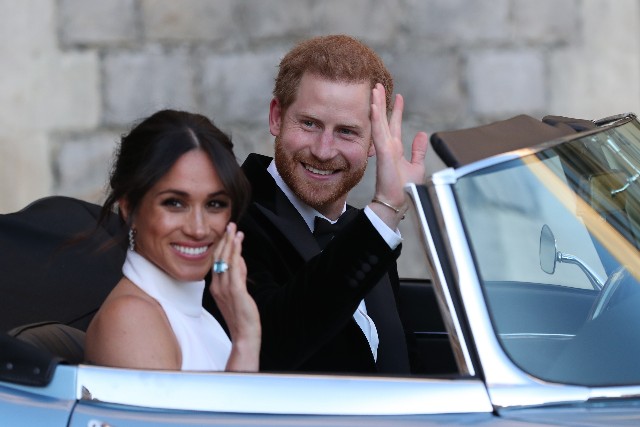 If riding off at midday on a carriage isn’t romantic enough, the newlywed couple changed outfits and traded a horse for a car to drive off into the sunset for their wedding after-party. We hear they danced the night away.

Making Eyes at Each Other During the RAF Centenary 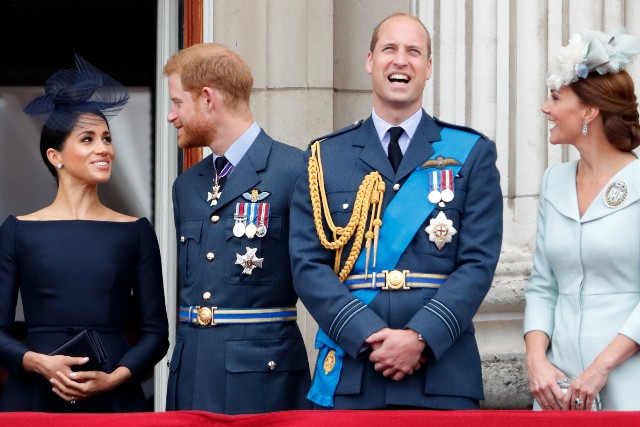 A couple of months after the wedding, the duke and duchess put on their formal-wear for the 100th anniversary of the Royal Air Force. Meghan clearly loves a man in uniform. 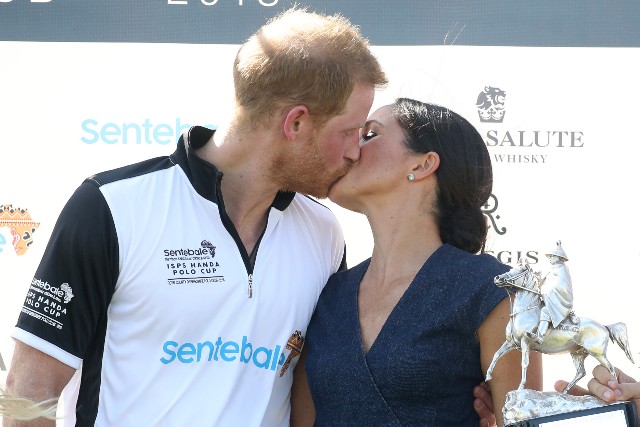 The newlyweds appeared happily flushed as they kissed at Sentebale Polo 2018 at the Berkshire Polo Club in July. It was reported by various outlets as one of their first notable PDA moments in their marriage.

Harry Beaming at Meghan During Her Cookbook Launch 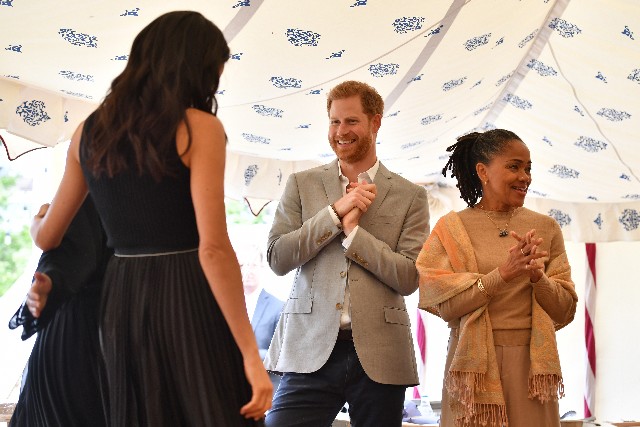 Meghan — appearing at an event launching the Together cookbook, which benefits women affected by the Grenfell Tower fire, on Sept. 20 — was photographed with her mother, Doria Ragland, and husband. Both appear incredibly proud, as evidenced by their clasped hands. Harry and Meghan’s missions to help people have always been very aligned.

Meghan Is Caught Looking Lovingly at Her Husband 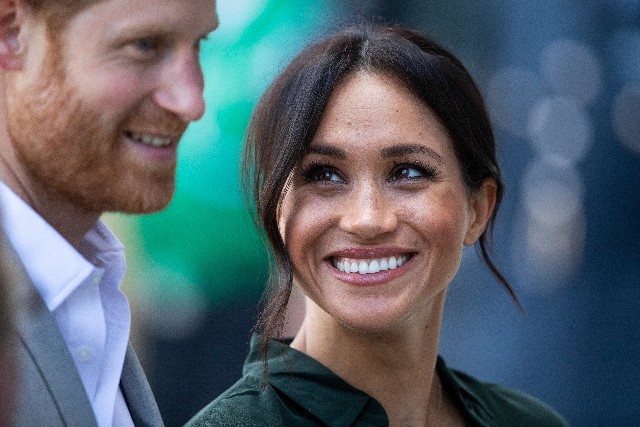 Harry and Meghan visited the University of Chichester in the land of their Dukedom, West Sussex, on Oct. 3, 2018. This glowing look Meghan shot Harry was just days before the couple announced they were having their first baby.

Looking Regal & Connected as They Walk Down the Stairs 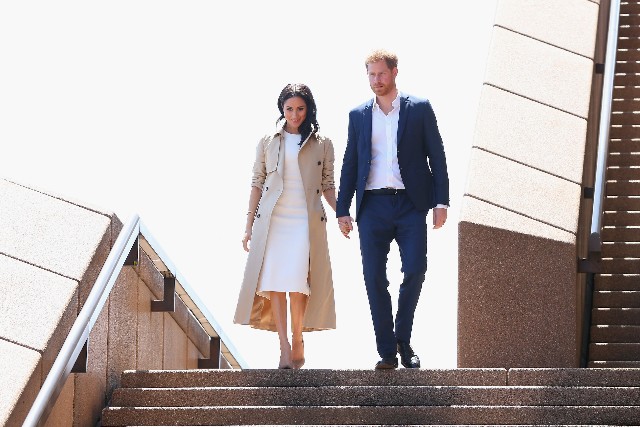 This photo, taken the day after Harry and Meghan announced they were expecting, looks like a romantic perfume ad, and we can’t get enough of it.

Harry Looking at Meghan in Admiration During Their Autumn Tour 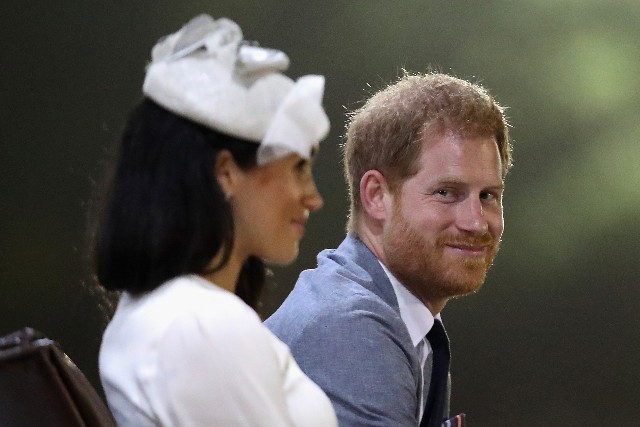 Harry gave his wife, and soon-to-be-mother of his child, a glowing look as they embarked on their 16-day autumn tour.

Getting Caught in the Rain at Victoria Park in Australia 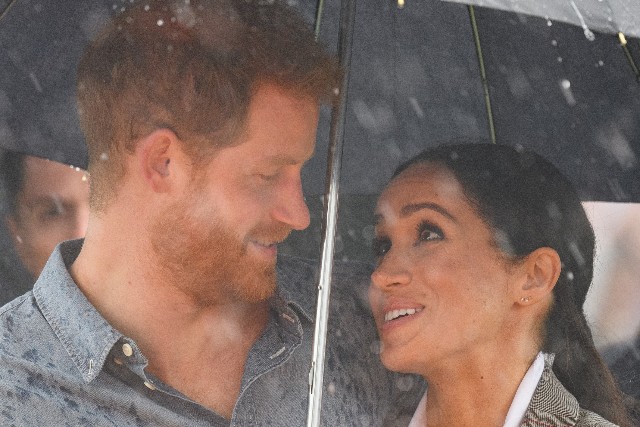 This photo, which looks like a smoldering scene from a romantic drama, was taken on Oct. 17, 2018, in Dubbo, Australia. Harry gave a speech while Meghan held an umbrella over his head while it rained. His look definitely conveys his gratitude.

Getting Cozy on the Beach in Australia 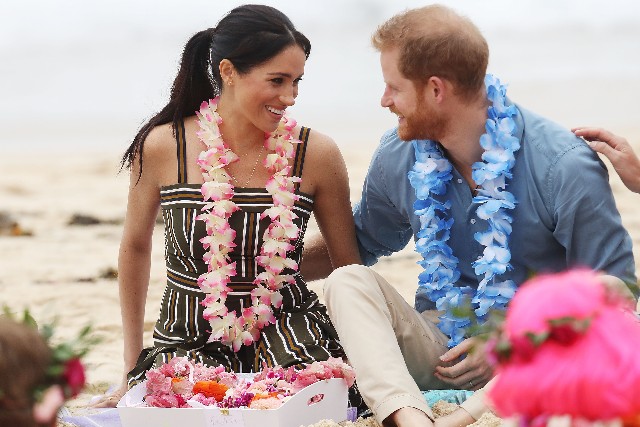 Meghan and Harry sat on South Bondi Beach in Sydney, Australia, talking to OneWave, an awareness group for mental health. Spending your early pregnancy weeks chilling on the beach with your prince husband sounds really nice. 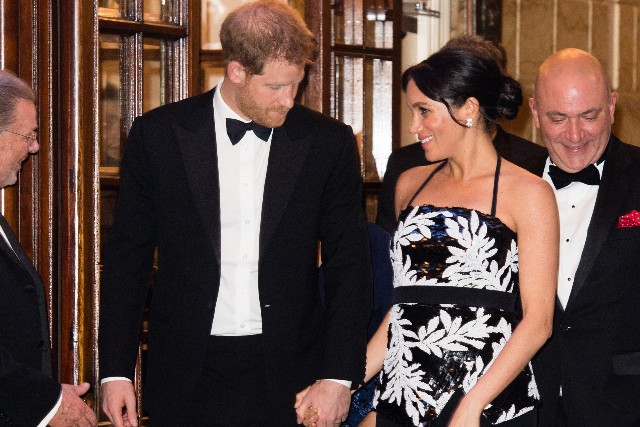 Harry and Megan appeared at the Royal Variety Performance 2018 in London, and Harry had eyes for Meghan’s baby bump. 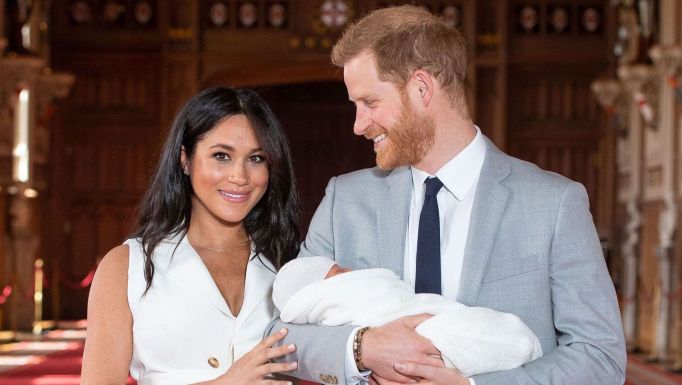