Back in the game! The Weeknd stunned fans with his performance at the 2021 Billboard Music Awards on Sunday, May 23.

Henry Golding introduced the musician live from an undisclosed location in downtown L.A. The Weeknd then arrived on scene in the back of a red convertible car to sing a beautiful rendition of his hit, “Save Your Tears.”

See What the Stars Wore to the 2021 Billboard Music Awards

The “I Feel It Coming” crooner wore a black trench coat, white shirt, black pants and black shoes as he was driven around an abandoned parking lot in the City of Angels. He later got out of the car before white big rig trucks raced by him. The Weeknd capped off his performance by belting out the lyrics while being circled by red and white vehicles.

The 31-year-old singer was the most-nominated artist at this year’s show. He earned 16 nods, including Top Artist, Top Male Artist and Top R&B Artist, bringing his Billboard Music Awards career nominations to 53. He took home 10 trophies on Sunday, adding to his nine previous wins as of 2020. 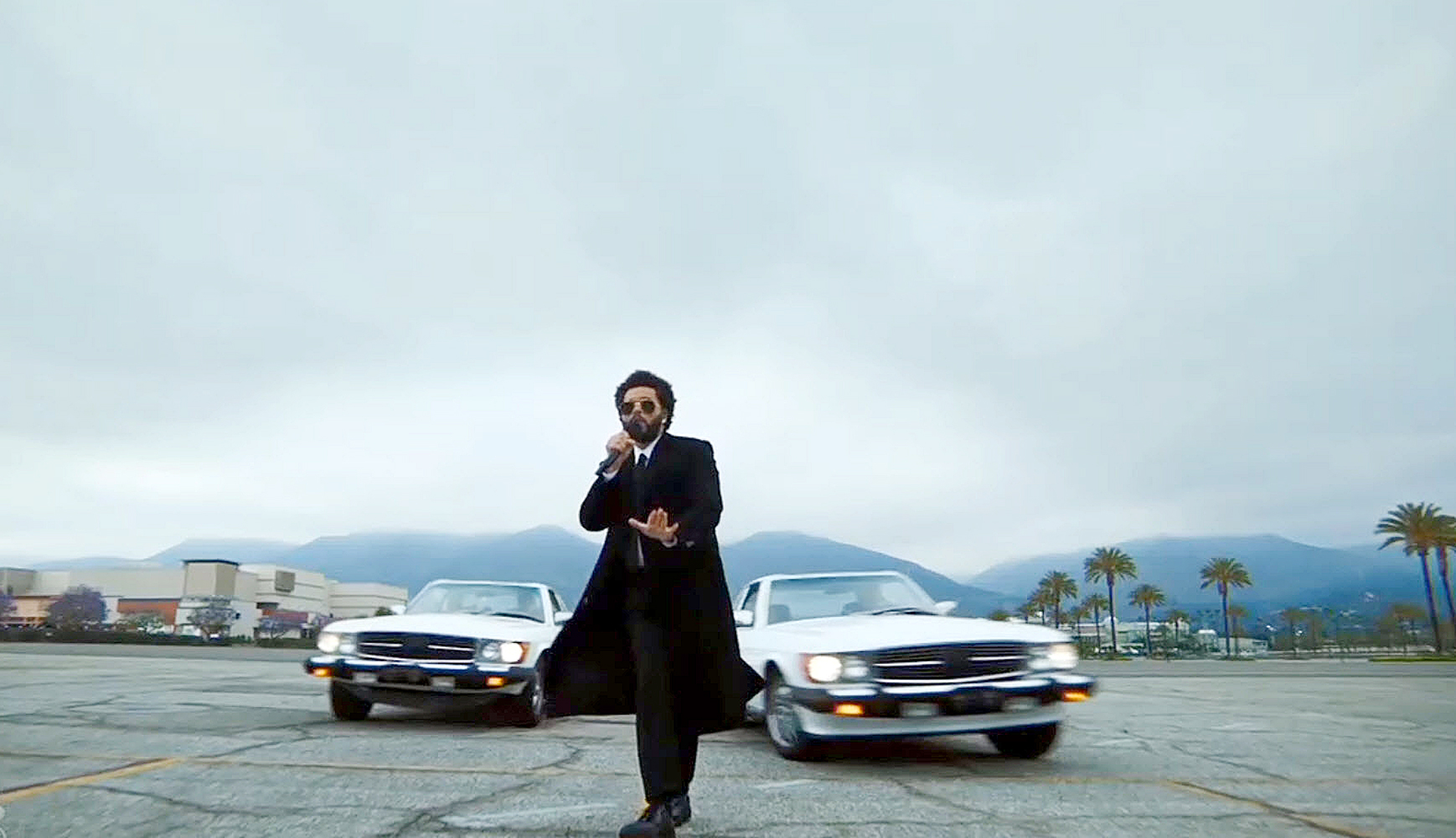 While accepting the award for Top 100 Song, the artist teased a possible new record, saying, “The After Hours are done and the dawn is coming.”

The “Elastic Heart” singer is also only the second artist in history to have three No. 1 singles from the same album, 2020’s After Hours, on the Billboard Hot 100 in three different years. He is the first male artist to achieve this.

The Canadian crooner’s explosive performance came just weeks after he sang “Save Your Tears” at the 2021 BRIT Awards and three months after he headlined Super Bowl LV in Tampa, Florida.

During the 14-minute show in February, The Weeknd took the crowd on a musical journey through his career, including a medley of “The Hills,” “I Feel It Coming” and an orchestral version of the Fifty Shades of Grey song “Earned It.”

This showstopping concert also featured his hits “Starboy,” “House of Balloons” and “Blinding Lights,” which capped off the experience — complete with fireworks at the stadium.

One week before he took the Super Bowl stage, the three-time Grammy winner spoke out against the Grammys and the Recording Academy after being snubbed for the 2021 ceremony.

“I use a sucker punch as an analogy. Because it just kind of hit me out of nowhere,” The Weeknd told Billboard in his January cover story. “I definitely felt … I felt things. I don’t know if it was sadness or anger. I think it was just confusion. I just wanted answers. Like, ‘What happened?’ We did everything right, I think.”

Despite receiving critical acclaim for After Hours, the musician didn’t receive a single nomination for the 2021 Grammys, which were announced in November 2020. He told Billboard in January that he brushed off criticism for his reaction to the snub, saying, “People told me I was going to get nominated. The world told me. Like, ‘This is it. This is your year.’ We were all very confused.”

The Weeknd Through the Years: From Drastic Haircuts to Shocking Prosthetics

The “Heartless” musician noted that he didn’t care about the awards show anymore, revealing that his previous Grammy trophies “mean nothing” to him now. He then pointed out that there is a bigger issue within the Recording Academy, stating, “In the last 61 years of the Grammys, only 10 Black artists have won Album of the Year. I don’t want to make this about me. That’s just a fact.”

Recording Academy chair and interim president/CEO Harvey Mason Jr. previously responded to The Weeknd’s comments, telling the Rolling Stone in November 2020, “I was surprised and can empathize with what he’s feeling. His music this year was excellent, and his contributions to the music community and broader world are worthy of everyone’s admiration.”