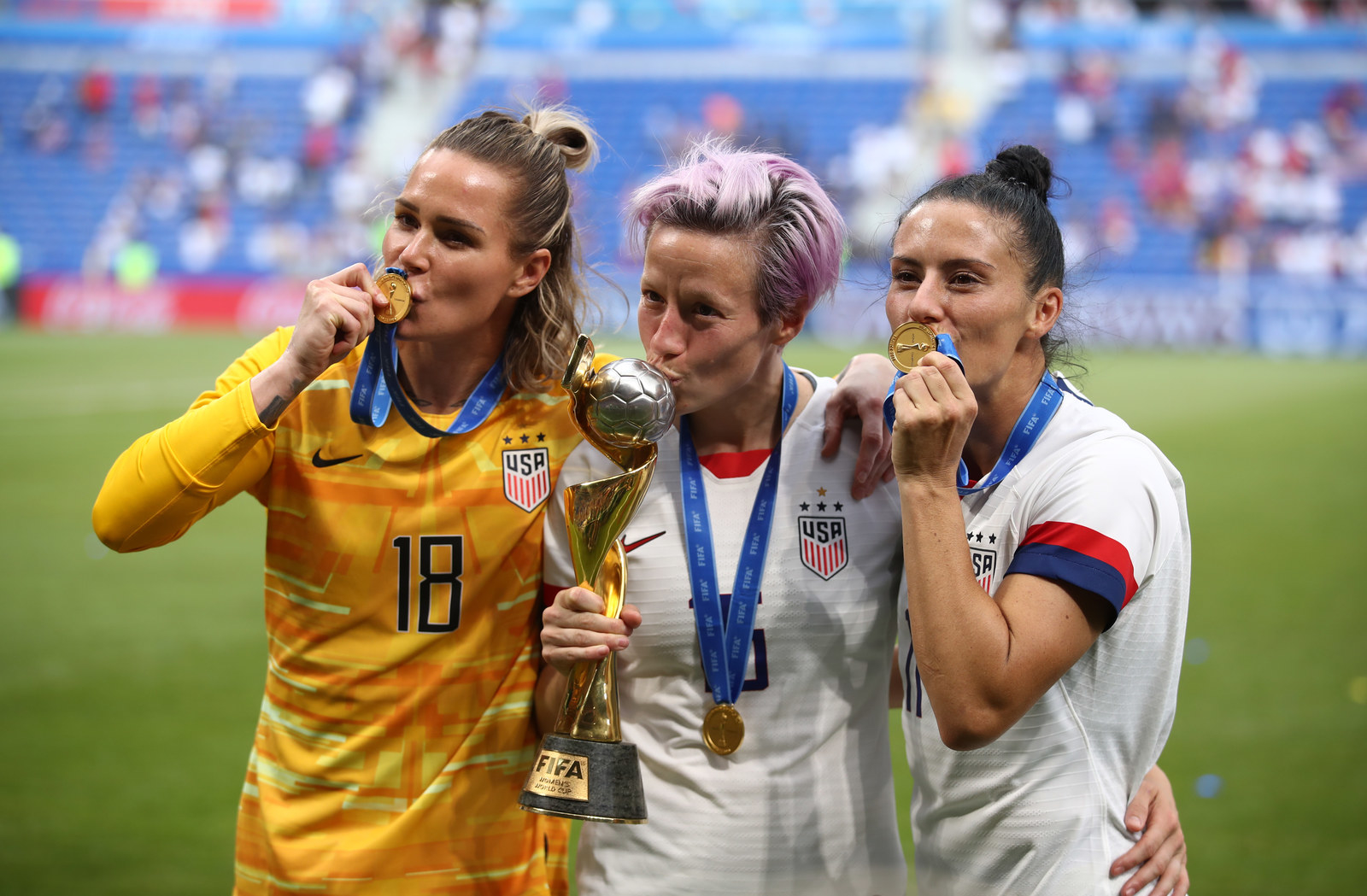 Lesbian athletes Ashlyn Harris, Megan Rapinoe, and Ali Krieger of the USA following their team’s victory in the 2019 FIFA Women’s World Cup France final match between the US and the Netherlands at Stade de Lyon.

Four years ago, at a bar in Brooklyn, I cried a few drunken, happy tears watching soccer titan Abby Wambach, fresh off a World Cup win, run ecstatically toward the stands to kiss her then-wife, Sarah Huffman. Wambach, one of the best players of all time, would be retiring from the game with a 5–2 win over Japan and yet another coveted title under her belt. It thrilled me that someone who’d proven herself the best of the best on the world’s stage was also openly gay, and openly in love. Wambach and her team’s triumph felt less like an American win to me and more like a win for the gays — and lesbians, specifically — just a week after the Supreme Court had legalized same-sex marriage nationwide.

At the time, Getty Images infamously captioned its shot of Wambach and Huffman embracing with “Abby Wambach of USA celebrates with a friend,” releasing a deluge of memes poking fun at the ways in which mainstream culture willfully overlooks romantic affection between women. But in the years since, the queerness of the US women’s national soccer team has only grown more visible — so visible, in fact, that it’s pretty much impossible for even the densest of straight people to ignore.

Over the weekend, the USWNT narrowly beat the Netherlands 2–0 in this year’s World Cup final for its second consecutive World Cup win, a victory that, as star forward, team cocaptain, and America’s lesbian sweetheart Megan Rapinoe pointed out, would have been impossible without queer power: “You can’t win a championship without gays on your team … that’s science right there.” Rapinoe’s out teammates include Ashlyn Harris and Ali Krieger, who announced their engagement earlier this year, while their coach, Jillian Ellis, is also an out lesbian. And then there’s fan-favorite Kelley O’Hara, who, recovering from a nasty head-to-head collision during yesterday’s match, replayed Wambach’s famous kiss with one of her own: She ran to the stands after the game and embraced her girlfriend, in a moment at once completely unexceptional and rather profound. She hadn’t previously made any grand pronouncement about her sexuality, but openly kissing her partner spoke for itself. 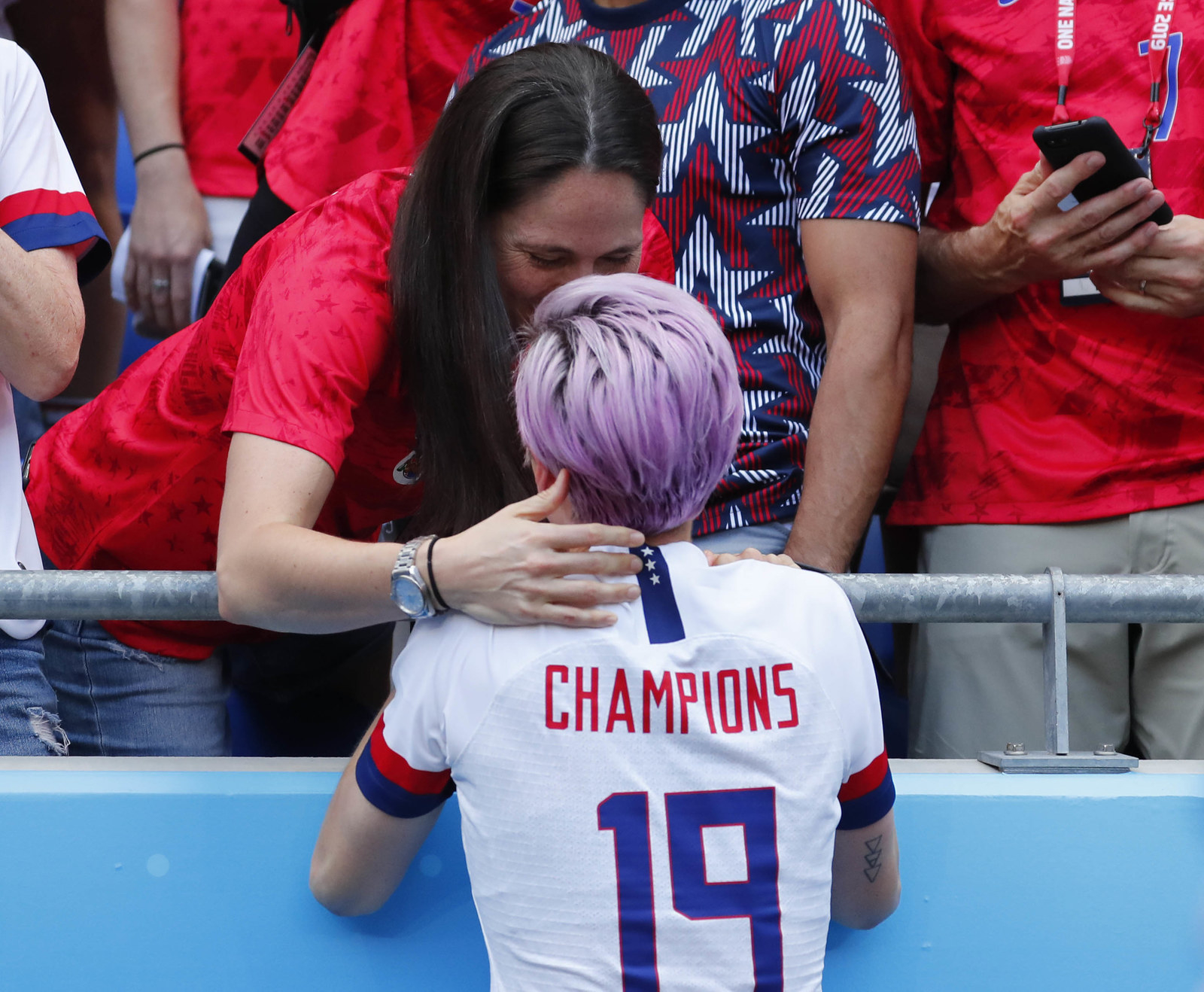 Megan Rapinoe kisses girlfriend Sue Bird after defeating the Netherlands in the championship match of the 2019 FIFA Women’s World Cup.

I don’t closely follow most sports, soccer included — I still barely understand what offsides means, no matter how many times my friends try to explain it to me — but this World Cup, as with the last, I was drawn in by all these incredible lesbians. For one thing, a lot of the players look like the kinds of hot mean girls with ponytails who both intimidated and titillated me in my closeted youth. For another, I’ve become enamored with the way the US team (and especially Rapinoe) has used its international platforms to advocate for LGBTQ rights, equal pay, and racial justice.

Lately, I don’t feel particularly proud to be an American. A few days before the World Cup finals, President Donald Trump hijacked the national mall to stage his 4th of July rally, as a monument to (white) American exceptionalism and supremacy. At a time of year when we’re all supposed to be celebrating our hard-won freedoms, there are men, women, and children detained in cages and subjected to horrifying treatment at the border. That doesn’t make me proud; it makes me sick. I’m not proud of where the United States — supposedly the best place the world — stands in international rankings when it comes to gun violence or maternal mortality rates. I’m not proud that trans women of color are being killed at epidemic levels, nor am I proud of a health care system that bankrupts citizens for the crime of poor health. I feel, if anything, perversely grateful that my race and class status have afforded me the safety and well-being so frequently denied to others in this country.

But do you know what does make me proud? The fact that Megan Rapinoe was among the first American athletes to kneel in solidarity with Colin Kaepernick, and that during the World Cup, she continued to protest by refusing to sing the national anthem. I’m proud that Rapinoe, earlier this year, said she wouldn’t go “to the fucking White House” if her team was invited after a potential World Cup win; and I’m proud of her teammates, whom Rapinoe said wouldn’t likely accept a Trump invitation either. I’m proud that Wambach, Rapinoe, and other women’s soccer players would have no problem playing with and against trans women athletes, and have demanded an end to discriminatory anti-trans policies in international sports. And I’m proud that, for all the policy’s other faults, Title IX helped build a team of women champions by mandating schools provide equal sporting opportunities for girls.

Someone’s pride is inevitably someone else’s shame, however, and everything I love about the US women’s team is everything plenty of others despise about it — in our country and around the world.

Rapinoe, for example, for her protests and for her refusal to let an explicitly anti-LGBTQ administration use her as a photo op, is “ungrateful,” “selfish,” “divisive,” and (of course) “un-American.” Trump has led those charges, playing to his base the same way he once did with Kaepernick, accusing Rapinoe of dishonoring the American flag (and, bizarrely, managing to twist a jab at a white soccer player into a racist tirade). It will never cease to stun and disappoint me that so many Americans can be whipped into a furious frenzy when someone who’s gay, or black, or otherwise marginalized dares speak out against injustice in ways they deem to be impolite or brash or unseemly. As Adam Serwer recently wrote in the Atlantic: “when those in power are caught abusing that power in ways that are morally indefensible and politically unpopular, they will always seek to turn an argument about oppression into a dispute about manners.”

Meanwhile, as Rapinoe and her fellow players who have spoken out against US atrocities are branded as “un-American” by conservatives at home, they’re considered by naysayers abroad to be all too American. Even before the US beat England’s lionesses in the semifinals, the British press continually attacked the USWNT for their “arrogance.” Pundits were surely going to lose their minds when, during the game itself, Morgan celebrated a goal with a gently ribbing gesture — she pretended to sip a cup of tea — that, on 4th of July weekend, amusingly recognized the fact that our country was born of anti-colonialist revolution.

I don’t have any problems with poking light fun at a powerful country like England. But I admit I was less comfortable when, in the World Cup opener, the USWNT completely demolished Thailand 13–nil, kicking off early rounds of criticism that the team was too arrogant for reveling in another country’s humiliating defeat. Beating the Brits at their own beloved game is one thing, but bulldozing a team made up entirely of people of color — who have far less cultural and economic power than ours does — feels, I’ve got to say, rather different.

Yes, our women’s team hasn’t achieved pay parity with our far crappier and far less beloved men’s soccer team — an injustice deserving swift rectification. But watching the World Cup, especially in the earlier rounds — before semifinals consisting of the US, England, the Netherlands, and Sweden had rendered the pitches blindingly white — I spent more time thinking about the pay disparities between our women’s team and others around the world, particularly in less wealthy countries.

Our team is great because of public policies like Title IX, and because, in the US, women’s sports are slowly beginning to earn the respect they deserve. Also, of course, we’ve got some incredible individual athletes, all of whom I love and admire. Still, I can’t really bring myself to join the chants of “USA!” whenever I’ve been to games in bars bedecked in red, white, and blue, because there’s a part of me that recognizes at least some of the USWNT’s supremacy is born of unearned American advantage.

While most of the criticisms lobbed against this team have struck me as completely ludicrous, I do cede the point that this is really the first time that an American team has dominated in a truly international sport — which means soccer has become yet another arena for the US to gloat about our supposed supremacy. Official USWNT merch declaring “USA vs. Everybody” leaves a bad taste in my mouth; it sounds less like a great team (rightfully) owning their greatness and more like an uncomfortably cheery summary of US imperialism’s bloody history.

And yet it is precisely because of my discomfort with slobbering jingoism that I’m grateful to the US players who champion a messier, more honest, more noble vision of the American patriot: someone who is constantly pushing this country — which wasn’t, in fact, built on a foundation guaranteeing universal freedoms — to be a better and more equitable place.

And even though I haven’t managed to fully embrace the American-branded celebrations of our win (the flags, the constant loops of “Born in the U.S.A.,” all the insufferable chanting), I’ve still felt overcome with joy these past couple days, seeing these women unapologetically celebrating their win. They’ve been shamed for their celebrations because they’re Americans, yes, but also because, obviously, they’re women — women who dare to take up space, who refuse to demur or downplay their own greatness.

The queer joy, in particular, has felt revelatory to me. Rapinoe’s girlfriend, WNBA superstar Sue Bird, wrote a completely delightful Players’ Tribune entry last week about how in love she is with this remarkable human — someone who’s not only openly gay, but credits her sexuality for her successes, and uses her own marginalized identity as a way to empathize with and advocate for others. Watching the game yesterday in a bar with some of my best gay friends, who decided against a “USA” chant and went with “LES-BI-ANS” instead, I felt exactly like Bird: “I was happy. I was crazy. I was PROUD. I was pretending to know about soccer. I was a little overwhelmed. I was pretty damn American. And I was in love with Megan Rapinoe.”

I was also in love with Ashlyn Harris, whose boozy Instagram stories of the team celebrating in beer goggles in the locker room after the game deserves an EGOT, and whose commitment to shouting “gays rule” has sustained me at least through the next week. I was in love with all of them, their goofiness and their clear affection for each other, their euphoria a shining light in this long, dark American summer. We can all use a little joy these days. ●

Adam Serwer’s name was misspelled in an earlier version of this post.