Inauguration Day 2017 was notable, in part, for who wasn’t there: There were vast empty spaces on the National Mall, which the Trump Administration would soon deny in the opening shot of its four-year war on truth.

The inauguration of President Biden was also defined by absences. But this time they were intentional, and — for better or worse — they were the point.

Because of the pandemic, the inaugural’s organizers asked the crowds to stay away, replacing them with symbols that stood in for the Americans who were staying at home, as well as the more than 400,000 Covid-19 victims who were no longer with us.

And because of the insurrection incited by the previous president two weeks ago and the lingering threats from violent pro-Trump extremists, the ceremony made the Capitol steps feel like a fragile bubble of democracy, secured by a wide perimeter and thousands of troops.

Mr. Biden’s inauguration, then, was even more than usual an event produced for television, our largest virtual space. Like so many public and personal events over the last year, it tried to re-create the emotional experience of being there, to voice the pain of separation and to point to a time when we might be together for real.

So it was at the same time defiantly normal — presenting normalcy as a statement and an ideal after four years on a Tilt-a-Whirl — and strikingly unusual. 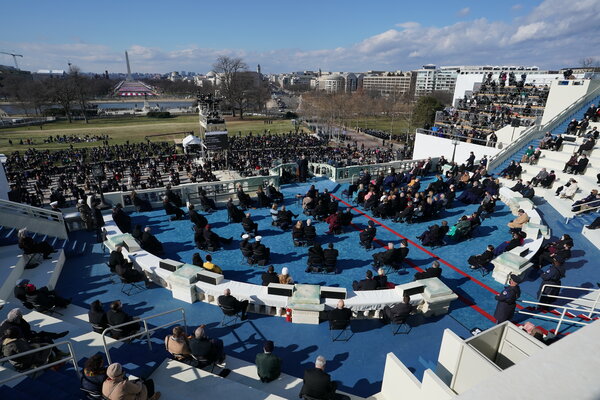 The close-up shots might have come from any inaugural. A fife and drum corps marched in 18th-century finery. Bunting decked a Capitol entrance that most of us last saw being violated by a MAGA mob on live TV. Former presidents reunited. Lady Gaga, Garth Brooks and Jennifer Lopez sang in the new administration.

But in the long shots, you could see how much had changed. The National Mall was a wind-whipped field of American flags standing in for the usual crowd, a haunting abstract equivalent of the cardboard cutouts at pandemic ballgames. The Reflecting Pool was lined with ghostly lights, which Mr. Biden dedicated the evening before in a cathartic ceremony.

Wednesday’s ceremony was a tense scene, however hopeful, in part because of what we’d seen unfold two weeks ago on that exact site. Symbolically, as John Dickerson said on CBS, the setting suggested an effort “to slowly reset the basic values and structures of American government.” But it was an image of both resilience and fragility, not unlike holding a swearing-in at Ground Zero in September 2001.

Often, as in daily life now, the ordinary and unsettling mixed. The split screens on cable news showed lines of limos carrying dignitaries on one side, masses of troops in fatigues on the other.

It was also a day that challenged the dusty clichés of inauguration TV, especially the phrase “peaceful transfer of power,” a description that has not been true in any non-farcical sense since Jan. 6.

Some stuck with it. (Mr. Biden used it in his speech, maybe aspirationally.) Some qualified it, like Judy Woodruff on PBS: “We’ve just witnessed the peaceful transition of power that, we’ve been saying over and over again today, was challenged just two weeks ago.” Still others were more blunt, like CNN’s Abby Phillips: this was “a transfer of power, though it was not peaceful.”

The most notable absence was that of the outgoing President Trump, though he refused to cede his last morning news cycle in office. So the news shows ended the Trump era as they began it: with wall-to-wall footage of the empty stage where he was going to throw himself a going-away rally.

Mr. Trump’s words at Andrews Air Force Base were largely a reprise of the recorded speech he released the day before. But even on a historic civic morning, the Trump aesthetic was unchanged. No sooner did he close his speech — “Have a good life, we will see you soon” — than he was answered by the Village People’s “Y.M.C.A.”: “Young man!”

This is the way a presidency ends: Not with a bang, but with a disco anthem.

Mr. Biden’s speech, like Mr. Trump’s, did not mention his election opponent by name. But the contrasts were clear enough.

On the one hand, he directly addressed the legacy of “alternative facts” that culminated in the effort to delegitimize his election: “There is truth,” he said, “and there are lies.” On the other, despite addressing several simultaneous crises, his tone was strikingly more optimistic than the “American carnage” rhetoric of four years ago.

Blunt but hopeful, calm but urgent. The Biden inauguration had to balance a number of contradictions, including addressing history — and installing the nation’s oldest president — while looking to the future with the swearing in of Vice President Kamala Harris, the first female, Black and Asian-American holder of the office and a major focus of the day’s commentary.

But there were also gestures like inviting the 22-year-old poet Amanda Gorman, whose spellbinding recitation called on listeners “to compose a country committed to all cultures, colors, characters and conditions of man.”

Maybe the most optimistic, or fanciful, theme of Mr. Biden’s speech, given all we’ve lived through recently, was his repeated invocation of “unity.” Still, if only for a day, cable news did dial the heat down a few clicks.

On Fox News — which recently added to its conservative-opinion lineup while purging news employees — the conservative commentator Ari Fleischer said he expected that “we’re in for a calmer era” with Mr. Biden, though he expected to hate the administration’s policies. “Boring is the new thrilling,” said CNN’s Van Jones.

But the day made clear that we were not yet so lucky as to live in boring times. The usual lengthy afternoon parade for the new president was replaced by a short (and nerve-racking, given all the talk of threats) jaunt from the presidential limo to the White House.

Instead, we got “Parade Across America,” a special hosted by Tony Goldwyn, whom you might remember as President Fitzgerald Grant on ABC’s “Scandal.” In four years, we’ve gone from a TV reality host becoming president to a TV president acting as proxy for the actual one.

Like Mr. Biden’s virtual convention this summer, the video shifted attention from the pageantry of politics to everyday Americans, from Jason Campbell, the dancing “TikTok doc,” to Kaitlyn Saunders, a girl who made a viral video figure skating on the Black Lives Matter Plaza in Washington, D.C.

It was another pandemic experiment in making do, as Jon Stewart put it in the introduction, “for the first time in our nation’s history and, God willing, the last time.”

Someday soon, let’s hope, we can rediscover the dullness of things like governmental parades for ourselves. Until then, the made-for-TV version will have to do.