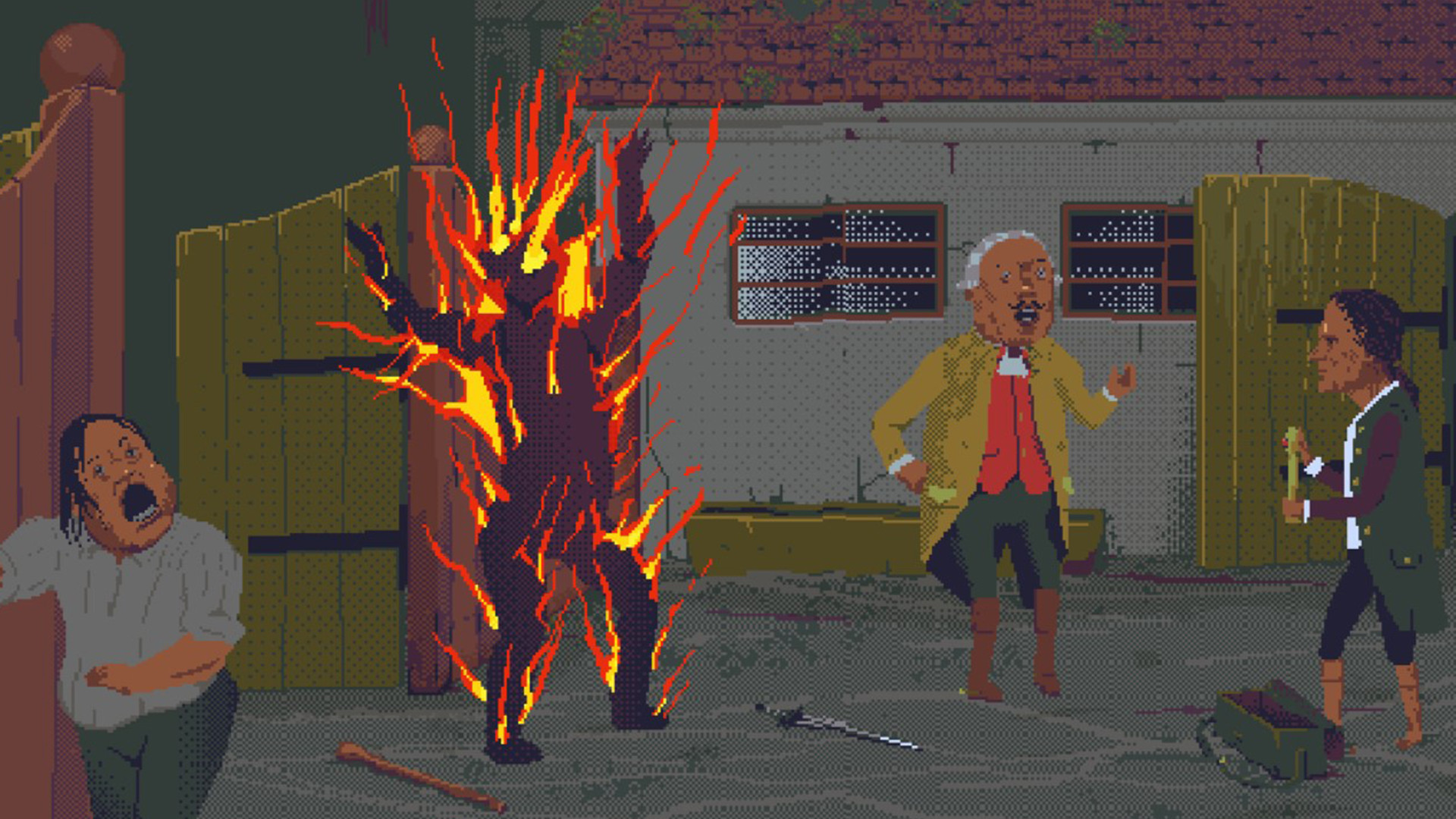 If you enjoyed Return Of The Obra Dinn you’ll love this new indie whodunit and its Amiga style graphics.

While reviewing other indie games we missed earlier in the year, such as Norco and Drainus, we made the point that names are very important and indie developers are usually rubbish at them. The Case Of The Golden Idol is an exception though, in that it’s actually a rather cool sounding name that immediately gets you interested in learning more about the game.

It’s arguably a bit of a deception though, as rather than some sort of Indiana Jones style romp this is actually a detective game set in 18th century England. There is definitely a golden idol in it, but some people may feel short-changed – until they discover that it’s also one of the best games of the year.

Thanks to movies like Knives Out and See How They Run whodunnits are unexpectedly fashionable at the moment, although if games can’t even take proper advantage of the ongoing superhero craze it’s unsurprising to find that they’ve also not picked up on the resurgence of interest in detective fiction. The release of The Case Of The Golden Idol this year is almost certainly a coincidence but it’s a well-timed one, as it’s the second best detective video game ever made.

To be fair, the detective video game genre is not a crowded one and the only other title worth mentioning in the modern era is Return Of The Obra Dinn. There are some similarities between the two games, in terms of both gameplay and the purposefully retro graphics, although rather than looking like an old Mac game The Case Of The Golden Idol is more like an early era Amiga title.

There’s no pretending that Golden Idol isn’t a fairly ugly game, at least at a first glance, but even though developer Color Gray Games didn’t have the budget for anything else the old-fashioned visuals are surprisingly good at reflecting the game’s historical setting. The graphics, especially how people are drawn, mimic hand-drawn cartoons of the era and can be amusingly macabre in terms of the violence they portray.

The first case (of 12) begins with a seemingly simple murder, as a man is apparently shoved off a cliff and falls to his death. In general terms, the game works like a point ‘n’ click adventure, as you search for clues and piece together evidence. Each time you find something interesting a word is added to your inventory and from there you can begin to formulate statements and hypotheses.

So, for example, the simplest observation is that person A ‘pushed’ person B off a cliff, a statement you can make to yourself on a separate ‘thinking’ screen that allows you to examine all your evidence and form a theory. You can also match faces with names, to work out who everyone is, as well as details such as where they were at the time of the crime.

This aspect works similarly to Return Of The Obra Dinn and neatly explains why being a detective is not something you’re ever likely to see in a big budget action game. There’s no reason why it couldn’t be at least a small segment though, as the interface is very simple and the act of creating an explanation, and then being proven right, is incredibly satisfying.

As you build your case and fit together the individual pieces of each puzzle, you’re able to fill in a more formal description of the murder using new words you discover, until you have the perfect explanation and can name the culprit.

What makes Golden Idol especially satisfying is that that there is an overarching story running through each of the cases, as you learn more about the titular idol and its magical powers. The game’s story takes place over several years and the idol’s influence over its owners is cleverly portrayed in what is a surprisingly compelling story, that would be a prime candidate for TV adaptation – if studios weren’t more interested in terrible ideas like turning Twisted Metal into a show.

The Case Of The Golden Idol is a fantastic bit of interactive fiction but as each new case increases in complexity (mostly, there are some odd dips occasionally) it doesn’t quite know when to stop. Not only do you end up with a seemingly endless number of gaps to fill in for each murder, but the motivations and explanations become increasingly obscure, to the point where guesswork begins to takeover – especially as by that point you’re very familiar with how the mechanics work.

It’s the equivalent of using every item with every other object in a graphic adventure, when you get stuck, and while it does work it’s very unsatisfying and begins to destroy the idea that you’re actually the world’s greatest detective. If you can keep yourself thinking logically perhaps you won’t end up giving in, but we’d be surprised if there are many that don’t end up looking up the solutions at some point.

No matter how good your perseverance though, The Case Of The Golden Idol is a wonderfully clever puzzle adventure. It proves Return Of The Obra Dinn was not a one-off and that video game whodunnits really could be the next big thing, at least when it comes to indie games.

The Case Of The Golden Idol review summary

In Short: Another great indie detective game that not only makes solving crimes fun and interesting but has some surprisingly good storytelling to tie everything together.

Pros: The detective mechanics are simple but flexible, and very satisfying to use correctly. Great use of a period setting and interesting plot. Amusingly grotesque graphics.

Cons: If you get stuck it’s relatively easy to just guess the last few clues, which spoils the illusion. Slightly uneven difficulty.

To submit Inbox letters and Reader’s Features more easily, without the need to send an email, just use our Submit Stuff page here.

For more stories like this, check our Gaming page.