The path back for performing arts in America is winding through a parking lot in Los Angeles, a Formula 1 racetrack in Texas, and Shakespeare’s summer home in New York’s Central Park.

As the coronavirus pandemic slowly loosens its grip, theaters, orchestras and opera companies across the country are heading outdoors, grabbing whatever space they can find as they desperately seek a way back to the stage.

The newest sign of cultural rebound: On Tuesday, New York City’s Public Theater said that it would seek to present Shakespeare in the Park once again this summer, restarting a cherished city tradition that last year was thwarted for the first time in its history.

“People want to celebrate,” said Oskar Eustis, the theater’s artistic director, who is among the 29 million Americans who have been infected with the coronavirus. “This is one of the great ways that the theater can make a celebration.”

Large-scale indoor work remains a ways off in much of the country, as producers wait not only for herd immunity, but also for signs that arts patrons are ready to return in significant numbers. Broadway, for example, is not expected to resume until autumn.

But all around the country, companies that normally produce outdoors but were unable to do so last year are making plans to reopen, while those that normally play to indoor crowds are finding ways to take the show outside.

This is not business as usual. Many productions won’t start until midsummer, to allow vaccination rates to rise and infection rates to fall. Limits on audience size are likely. And attendees, like those visiting the Santa Fe Opera, will find changes offstage (touchless bathroom systems) and on: Grown-ups (hopefully vaccinated), not children, will play the chorus of faeries in the opera’s production of Britten’s “A Midsummer Night’s Dream.”

There remain hurdles to overcome: Many of the venues still need to win permission from local officials and negotiate agreements with labor unions. But the signs of life are now indisputable. 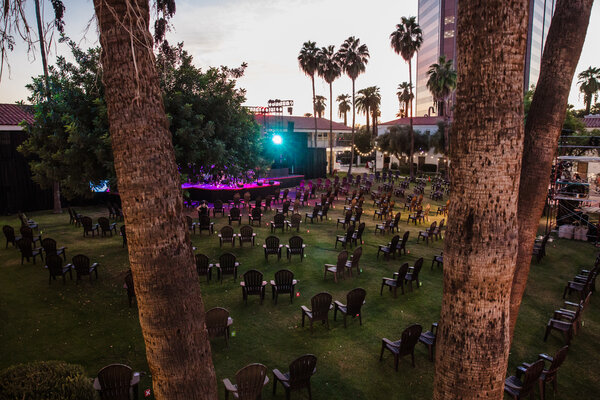 In Los Angeles, the Fountain Theater is about to start building a stage in the East Hollywood parking lot where it hopes in June to open that city’s first production of “An Octoroon,” an acclaimed comedic play about race by Branden Jacobs-Jenkins. Austin Opera next month aims to perform outdoors for the first time, staging “Tosca” in an amphitheater at a Formula 1 racetrack, while in upstate New York, the Glimmerglass Festival is planning to erect a stage on its lawn.

Organizations that already have outdoor space have a head start, and are eager to use it.

Mark Volpe, the president and chief executive of the Boston Symphony Orchestra, said that later this month he will ask his board to approve a plan to hold performances once again this summer at Tanglewood, the company’s outdoor campus in Western Massachusetts. The season, if approved, would be just six weeks, mostly on weekends, with intermissionless programs lasting no longer than 80 minutes, and no choral work because of concerns that singing could spread the virus.

The audience size remains unknown — current Massachusetts regulations would allow just 12 percent of Tanglewood’s 18,000-person capacity — and Volpe said that, even if the regulations ease, “we’re going to be a tad conservative.” Nonetheless, the prospect of once again hearing live music on the vast lawn is thrilling.

“Having the orchestra back onstage with an audience,” Volpe said, “I can only imagine how emotional it’s going to be.”

The Muny, a St. Louis nonprofit that is the nation’s largest outdoor musical theater producer, is hoping to be able to seat a full-capacity audience of 10,000 for a slightly delayed season, starting July 5, with a full complement of seven musicals, albeit with slightly smaller than usual casts.

“Everyone is desperate to get back to work,” said Mike Isaacson, the theater’s artistic director and executive producer. “And our renewal numbers are insane, which says to me people want to be there.”

The St. Louis Shakespeare Festival, which performs in another venue in that city’s Forest Park, has much more modest expectations: It is developing a production of “King Lear,” starring the Tony-winning André De Shields of “Hadestown,” but expects to limit audiences to 750.

The Public Theater, which has over the years featured Al Pacino, Oscar Isaac, Meryl Streep and Morgan Freeman on its outdoor stage, is planning just one Shakespeare in the Park production, with an eight-week run starting in July, rather than the usual two-play season starting in May.

“Merry Wives,” a 12-actor, intermission-free version of “The Merry Wives of Windsor,” adapted by Jocelyn Bioh and directed by Saheem Ali, will be set in Harlem and imagine Falstaff as an African-American seeking to woo two married women who are immigrants from West Africa.

How many people will be able to attend? Current state regulations would allow the Public to admit 500 virus-tested people, in a Delacorte Theater that seats 2,000, but the theater is hoping that will change before opening night. And will there be masks? Testing? “We are planning on whatever needs to happen to make it safe,” Ali said.

For professional theaters, a major potential hurdle is Actors’ Equity, the labor union, which throughout the pandemic has barred its members from working on any but the small handful of productions that the union has deemed safe. But the union is already striking a more open tone.

“I am hopeful now in a way that I could not be earlier,” said Mary McColl, the union’s executive director. She said the union is considering dozens of requests for outdoor work, and has already approved several. As for Shakespeare in the Park, she said, “I’m very excited to see theater in the park. We are eagerly working with them.”

A few theaters already have union permission. Utah’s Tuacahn Center for the Arts starts rehearsals next week for outdoor productions of “Beauty and the Beast” and “Annie.” Tuacahn, which stages work in a 2,000-seat amphitheater in a southern Utah box canyon, is planning to use plexiglass to separate performers during rehearsals, but expects not to need such protections by the time performances begin in May.

“I’m extremely excited,” said Kevin Smith, the theater’s chief executive. “We had a Zoom call with our professional actors, and I got a little emotional.”

Because Broadway shows, and some pop artists, are not ready to tour this summer, expect more homegrown work. For example: the 8,000-seat Starlight Theater, in Kansas City, Mo., which normally houses big brand tours, this summer is largely self-producing.

In some warm-weather corners of the country, theaters are already demonstrating that outdoor performances can be safe — and popular.

The Phoenix Theater Company, in Arizona, and Asolo Repertory Theater, in Sarasota, Fla., both pivoted outdoors late last year; the Arizona company borrowed a garden area at the church next door to erect a stage, while Asolo Rep built a stage over its front steps.

The audience seems to be there. Asolo Rep’s six-person concert version of “Camelot” sold out before it opened, and the Phoenix Theater’s current “Ring of Fire,” featuring the music of Johnny Cash, is also at capacity.

Now others are following suit. There are big examples: Lincoln Center, the vast New York nonprofit, has announced that it will create 10 outdoor spaces for performance on its plaza, starting next month, while the Brooklyn Academy of Music and Playwrights Horizons are planning to stage Aleshea Harris’s play, “What to Send Up When It Goes Down,” in June in the Brooklyn Botanic Garden.

And on Monday, the Los Angeles Philharmonic Association said it anticipates limited-capacity live performances at the Hollywood Bowl this summer.

The finances are complicated so long as there are capacity limits imposed by health officials. For some, performing outdoors promises more revenue than working indoors with social distancing.

“I was sitting in my theater alone, looking out at the empty seats, and realized that if audiences were forced to sit six feet apart, it reduced my audience size from 80 to 12, which is not a robust financial model to present to your board of directors,” said Stephen Sachs, a co-founder and artistic director of the Fountain Theater. “So why not go outside?”

But for larger organizations that cost more to sustain, capacity limits pose a different challenge. In San Diego, the Old Globe says that, at least in the near term, it might only be allowed 124 people in its 620-seat outdoor theater.

“Just to turn on the lights requires an investment that will eat up most of what those seats will yield,” said the theater’s artistic director, Barry Edelstein. “It’s just incredibly challenging to figure out what we can afford to do — maybe a little cabaret, or maybe a one-person performance of some kind.”

Nonetheless, Edelstein said he expects, like his peers, to present work outside soon. “There is a lot of stuff happening outdoors — dining, religious services, sports,” he said. “We’re not really fulfilling our mission if we’re sitting here closed.”