BARCELONA, Spain — Mireia Serret, a 21-year old student at the University of Barcelona, said that she was not a big fan of the band that played here on Saturday, nor does she normally like large crowds.

Nevertheless, Serret had snapped up one of the 5,000 tickets to Europe’s biggest indoor rock concert since the start of the pandemic because “it had just been too long since I was last able to dance and have fun at a concert.”

Organized by a group of Spanish music promoters as part of an initiative called “Festivals for Safe Culture,” the concert in the Palau de Sant Jordi was presented as Europe’s boldest effort to get thousands into an indoor venue, without seating or mandatory social distancing. The sole act was Love of Lesbian, a Spanish indie rock band, which formed before Serret was born. “For me, this isn’t about whether I really like their music, but about being able to feel and live their music, right next to so many other people,” Serret said. 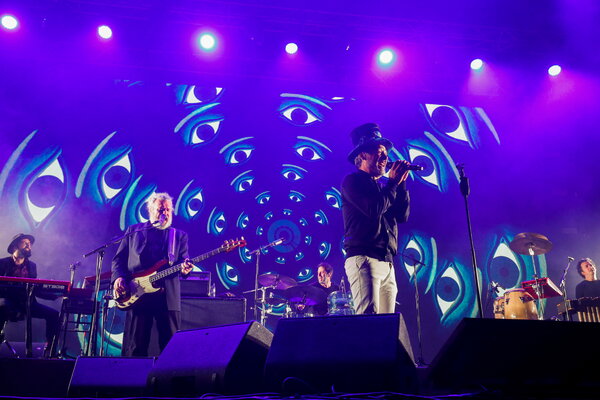 Trial concert or festival events have been held in several European countries, including in Germany and the Netherlands, as part of efforts to allow crowds to form again to see live music. The British government will also run a series of test events next month, including one at a nightclub in Liverpool, also without requiring social distancing.

Europe’s famed summer music festivals, which draw tens of thousands of fans to open outdoor spaces, are in doubt this year despite the tests. Several major festivals have already canceled their June lineups, including Rock am Ring at the Nürburgring racetrack in Germany and Sonar festival in Barcelona. Sonar’s management pushed their flagship festival to 2022 and is planning two smaller events in October. Still, Roskilde, Denmark’s biggest, hopes to go on in June with acts including the rapper Kendrick Lamar. The Danish government said last week that it aims to restart pop concerts from May 6 onward with the help of a “corona passport” that will allow people to show their status of vaccination, proof of recent negative tests for the virus or documentation they have recovered from Covid-19.

At a time when countries like France and Italy have recently put their residents back under lockdown to help stop another wave of infection, the people behind the Barcelona event said their goal was to look ahead.

One of the organizers, Ventura Barba, the executive director of the Sonar festival, said in an interview that Saturday’s concert was “a small but important step toward normality.” Barba forecast that the Barcelona concert would break even, but he stressed that it was “not a commercial project,” nor could it be replicated for festivals that operate over several days and with other financial constraints. Ticket sales accounted for 36 percent of the Barcelona concert’s budget of about €250,000, with 30 percent covered by public authorities, 24 percent from private sponsors and 10 percent from the promoters themselves.

A hospital team helped test the concertgoers for Covid-19 before the event, using as their model a smaller concert last December in another Barcelona venue, the Sala Apolo. At the Apolo, the audience of 500 people was tested before the show, as well as another 500 people who acted as a control group, and everybody got tested again eight days later. The Apolo’s concertgoers all tested negative, while two people in the control group tested positive, according to Josep Maria Llibre, a specialist in infectious diseases from the Germans Trias i Pujol hospital northeast of Barcelona who is also monitoring the Palau concert.

Ahead of Saturday’s concert, six people tested positive, according to the organizers. However, the medical team is using neither a control group nor postconcert testing, relying instead on public medical records to track whether any concertgoers will later get Covid-19.

Dr. Llibre said the decision was made both for financial and practical reasons. He acknowledged in an interview that the tracking method used Saturday would be less accurate than that used at the Apolo, but he argued it could still help show that a safely-organized concert “is not a super-spreading event,” contrary to what some might presume. “In the case of concerts, there has been very little or no data, but it has been empirically assumed that it is a very high risk to have people dancing together,” he said.

The Palau can welcome 17,000 people, but the 5,000 ticketholders were not allowed into its stands and instead were kept divided within three areas of the dance floor, while having to wear FFP2 face masks (the European standard) provided by the organizers.

On Saturday, some concertgoers said they felt fully reassured by the safety protocols, but a few others said they had briefly hesitated before going.

“If I had not been vaccinated already, I really would have thought twice about coming here,” said Cristina Delgado, a doctor. But Ana, her sister, who was also vaccinated because she works in health care, felt differently. “I was going to come whatever, because I want to save culture and return us to normal life,” she said.

Inés Villasuso, a 24-year old nurse, also said that “it would have been better to get everybody tested again later, to have scientific evidence that can really convince the authorities that such a big event can be held safely.” But she and her twin sister, Eva, agreed that the concert outstripped their expectations. “It felt like living a total dream,” Eva said.

In an interview before the concert, Julián Saldarriaga, a member of Love of Lesbian, said that the band’s decision to perform had received very broad support, but also generated “some criticism, from people who have called us irresponsible or who say that we only care about money.” But for his band, he said, “we really saw this as an opportunity to take part in the recovery of culture.”

Rather than featuring a supporting act, the concert was preceded by a series of videos about Covid-19, shown on the big stage screen and interspersed with hits from the distant past — like “Come Together” and “Here Comes the Sun,” by The Beatles — whose themes warmed up the crowd.

To comply with the safety protocols, on Saturday, concertgoers visited one of three smaller Barcelona music venues to get a rapid antigen test for Covid-19. The cost was included in the €23 ticket price.

Christiana Guldager, a photographer, said that she cried before her test at the Razzmatazz nightclub. “I’ve been dancing so often in that place that it made me feel very emotional to find it instead converted into a mini-hospital,” she said.

Later that night in the Palau, emotions also ran high. The dance floor was lit up by cellphones as well as white face masks. When Santi Balmes, the lead singer, invited the crowd to deliver the chorus of a song, he got a powerful response. “Woohoo, you still remember how to sing!” Balmes shouted back. As he brought the concert to a close, Balmes told the crowd, “the band is not important: What is important is the experience and the experience is incredible.”

Pablo García, 27, an illustrator, agreed. “Of course I never stopped listening to music, but you really need to be at a concert to feel the bass right inside your heart.”