The dental hygienist greeted her longtime patient enthusiastically. Unexpectedly, the 68-year-old woman burst into tears. “I feel so bad,” she said, her voice cracking with emotion. “I’m worried I might be dying.” She was always tired, as if all her energy had been sucked out. And she felt a strange dread that something awful was happening to her. And if that weren’t enough, for the past couple of weeks she had lost much of her hearing in her right ear. She was sure she had a brain tumor — though none of her doctors thought so. After offering sympathy, the dental assistant realized she had something more to offer: “We have a dental CT scanner. Should we get a CT of your head?” The patient was amazed. Yes — she would very much like a CT scan of her head. It would cost her $150, the technician told her. At that point, it seemed like a bargain. And, just like that, it was done.

And there was a mass. It wasn’t on the right side, where she thought her trouble lay. It was on the left. And it wasn’t in her ear, but in the sinus behind her cheek. That was confusing. She thanked the tech for the scan. She had an ENT and would send the images to him to see what he thought.

A History of Ear Issues

That right ear had been giving the patient trouble for more than 20 years, she reminded her ear, nose and throat doctor in Prescott, Ariz., when she spoke with him. In her 40s she developed terrible vertigo. She was living in Atlanta then and saw an ENT there who told her she probably had Ménière’s disease, a disorder induced by increased pressure in the inner ear. The cause is unknown, though in some cases it appears to run in families. And it’s characterized by intermittent episodes of vertigo usually accompanied by a sensation of fullness in the ear, as well as tinnitus and hearing loss. These symptoms can be present from the start, but often develop over time. There’s no definitive test for the disease, though evidence of the increased pressure is sometimes visible on an M.R.I.

Medications like antihistamines and steroids can mitigate the symptoms, but there is no treatment for the disease itself. The patient was encouraged when her vertigo went away after a few months, and she tried to forget about it, but her body wouldn’t let her. Two years later she developed a problem with her balance. It wasn’t the sense of motion she had felt with the vertigo. Instead, there were times when the simple action of walking seemed strangely unnatural; times when she found it difficult to walk in a straight line. It could last for weeks, then disappear for months. And she couldn’t predict its coming or going. It got so bad that she started using a hiking stick whenever she walked farther than her front yard.

She went to a neurologist, who ordered an M.R.I. of her brain. The images showed a little patch of something on the right side of her skull, near her inner ear. But both he and the radiologist thought it wasn’t significant. Besides, it was in the wrong place to be causing her symptoms. Instead, her doctor sent her to physical therapy to treat a disorder known as benign paroxysmal positional vertigo (B.P.P.V.), the most common cause of vertigo, usually triggered by head movements. The inner ear has fluid-filled tubes called semicircular canals. The sensation of the fluid moving in these canals tells your brain the position of your body in the world and helps you keep your balance. B.P.P.V. occurs when small pieces of bone (otoliths) are dislodged and roll around on the sensitive surface of the semicircular canals, sending confusing signals to the brain about the body’s position in the world.

Physical therapy is normally effective in the treatment of B.P.P.V., though it didn’t do much for this patient. Throughout all this, even though all her doctors agreed that her right ear was the source of her intermittent loss of balance and vertigo, she never had a problem with the ear itself. She never had earaches. Her hearing was perfect. And then one day, it wasn’t. 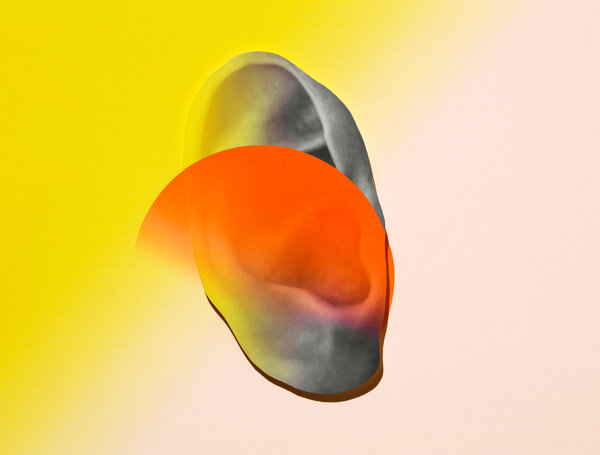 Buzzing That Would Not Stop

Two years earlier, when she was 66, she was awakened one morning by a loud buzz. It took her a minute to locate the sound. It was coming from inside her right ear. It sounded like a fluorescent light on its last legs. Tinnitus is what her ENT at the time called it. It was, he told her, just one more thing she would have to put up with. Those were not words the patient wanted to hear. It was so loud that at times it was hard to hear what people were saying. The buzz — or, sometimes, a siren — was so intense it could wake her up from a dead sleep. Sometimes it would quiet down, but it never went away. Never.

When her own doctors had nothing to offer, the woman looked elsewhere. She saw chiropractors, naturopaths and doctors specializing in alternative medicine. She was treated with antibiotics, antivirals and lots and lots of supplements. Nothing helped. Then, just weeks before she went to her dentist, she woke up and could hardly hear at all out of that ear. Everything was muffled, as if that ear was underwater. Her current ENT prescribed prednisone to reduce any inflammation.

But when he saw the dental CT, he immediately ordered a conventional CT of her head. The dental scan was developed to give a three-dimensional image of the jaw and teeth, so it can’t be expected to show the entire skull. The full CT confirmed that there was a small mass in the left sinus. Based on its appearance, her doctor suspected it was a remnant of an infection from years before. But on the right side there was something else: A mass about the size of a strawberry had destroyed much of the mastoid bone just behind her ear. It was in the same place as the much smaller abnormality seen in the first M.R.I. years earlier. Now it was large enough to compress one of the vessels leading to the jugular vein. The radiologist said it looked like an infection. Or possibly a rare kind of bone cancer.

Stray Cells in the Brain

With cancer a possibility, the patient decided she needed a second opinion. She reached out to the Arizona branch of the Mayo Clinic, in Phoenix, and was scheduled to see Dr. Peter Weisskopf two weeks later. Weisskopf listened as the patient described the vertigo, tinnitus and loss of hearing, along with the debilitating fatigue and terrifying sense of impending doom. “I’m not sure this mass could cause all that,” he told her, but he agreed that an M.R.I. would provide important diagnostic information. He suspected that she had something known as a cholesteatoma. These are benign growths of cells that get trapped inside the ear — or, rarely, as in this patient’s case, inside the brain — and start to grow. Sometimes these cells are imported into the ear after a chronic infection, but most of the time they get left there during fetal development.

Weisskopf reviewed the M.R.I. The brain tissue showed up, as expected, as stripes of light and dark gray surrounded by fluid, which appears black. But just behind this patient’s ear, nestled into the lower edge of the mastoid bone of the skull, was a big bright cloud of white. Based on that appearance, Weisskopf knew what she had. It was a cholesteatoma. Although this is not a cancer, these sorts of tumors have to be removed. Left in place, they continue to enlarge until they cause real trouble. The patient was eager to have the thing removed. She felt certain that it had to be behind the symptoms she had been living with these past few years.

Removing the large mass took two operations, the second one late last spring. But it was worth it, the patient told me. The worst symptoms are completely gone. Her fatigue and sense of oppression and doom disappeared after the first surgery. But even after the second, she still has the tinnitus, which is very loud at times. She still has trouble with her balance. Her hearing is not as good as it used to be.

Weisskopf doesn’t believe the mass caused the patient’s symptoms. The patient respectfully disagrees; where it really mattered, with her mood, her sense of well-being, she feels back to something like her old self. And even though her doctor can’t see the link, she’s certain it all came from that growth, which, she thinks, maybe wasn’t quite as benign as her doctors and the textbooks say.

Lisa Sanders, M.D., is a contributing writer for the magazine. Her latest book is “Diagnosis: Solving the Most Baffling Medical Mysteries.” If you have a solved case to share with Dr. Sanders, write her at Lisa [email protected]