The sculpture, made of red stainless steel and chains, rocks and sways. The lengths of links — some rusted, some the bright silver of galvanized steel — ripple in the wind. Nearby, a very different sculpture also takes the form of a chain, this time represented on a massive scale, its links severed and scattered.

These sculptures, “Homage to Coco” (1970) and “Song of the Broken Chains” (2020), are the work of the artist Melvin Edwards, 84. Made five decades apart, they are coming together in City Hall Park in Manhattan, in an exhibition of Mr. Edwards’s public sculpture. Called “Brighter Days,” it runs through Nov. 28.

The exhibition, whose opening coincides with the Frieze New York art fair beginning Thursday at Hudson Yards, is being highlighted as part of the fair’s tribute to the Vision & Justice Project and its founder, Sarah Elizabeth Lewis. Mr. Edwards’s work touches on the project’s mission of “examining art’s central role in understanding the relationship between race and citizenship in the United States.”

A walk-through of the sculpture show was planned, and the Alexander Gray Gallery is showing a model for “Song of the Broken Chains,” and a selection of Mr. Edwards’s series Lynch Fragments, as well as several other works, at its Frieze New York booth.

This show of six sculptures is the first thematic survey exhibition of Mr. Edwards’s work, which often addresses issues of Black history and identity, in public space in the city. A number of his works are on permanent display in New York, as well as throughout the United States, and in Cuba, Senegal and Japan. 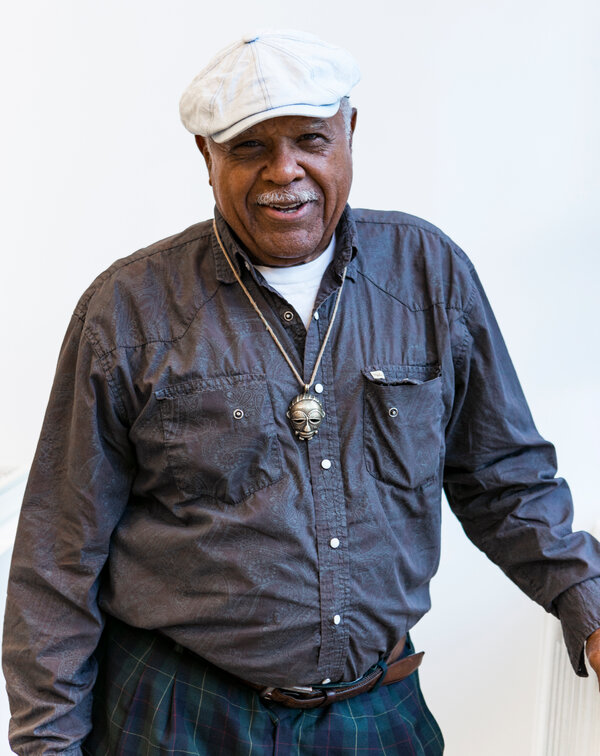 “His work is partly about this joining of the abstract with representational icons like chains, so that a lot of the works are simultaneously abstract and not abstract,” said the curator Daniel S. Palmer of the Public Art Fund, which organized the exhibition.

“He was coming up in the ’60s, when there were questions about the role of abstraction. How do you simultaneously have abstract forms but also symbols that address issues like race, and labor, and the African diaspora? Mel does such an incredible job at joining and uniting these.”

Over the years, Mr. Edwards has worked with a variety of materials, including barbed wire, spikes and chains, which he has repeatedly returned to with different lenses. Sometimes, as in “Homage to Coco,” these are literal chains, used as part of the work itself; in other cases, as in “Song of the Broken Chains,” the chains are explored metaphorically.

“As a sculptor who works in steel, I’m working in the tradition of blacksmiths and metalworkers,” Mr. Edwards said in a phone interview in late April. “The idea of making chains, originally, was to make a stronger and more flexible rope to connect things. Often when people talk to an artist of African-American descent, they presume chains have to do with slavery. That’s a limited idea of the chains. I don’t say it’s not there, because it is, but it doesn’t start there.”

“Homage to Coco,” for instance, started with the memory of a rocking chair that belonged to his grandmother, Cora Anne Nickerson, whom he called Coco. Mr. Edwards, who was born in Houston in 1937, said that when he was young, his grandmother had a pair of chairs — one rocked and one didn’t. As he thought about ideas of movement in sculpture later in life, the memory of playing with the rocking chair came back to him.

“It’s really the dynamics, the physical dynamics, that I remembered,” he said. “In researching the possibilities of kinetic sculpture, I didn’t want to make anything like a Calder. It’s symmetrical when the piece is at rest, and as you move it, it goes out of balance. The chains are flexible, they change the dynamic of the rocking.” (In this installation, the sculpture is secured and cannot rock, but the chain links are slack and can swing.)

The exhibition in City Hall Park, which was delayed nearly a year, provides a rare opportunity to see an exhibition of six public sculptures by a single artist, all but one produced between 1970 and 1996. “Song of the Broken Chains” was commissioned in 2020 by the Public Art Fund.

“‘Song of the Broken Chains’ is a chain, like we’ve seen in other works, but it’s grown to this monumental scale,” Mr. Palmer said. “It really is a powerful piece, with themes of liberation and rupture. It has the perspective of an artist who’s been working with this motif for years, who has thought about the potential of large-scale monumental public sculpture to address significant cultural and social issues.”

As part of Frieze, more than 50 galleries and online viewing rooms are helping to honor the Vision & Justice Project. Works by Carrie Mae Weems and Hank Willis Thomas have been commissioned, and a series of screenings, talks and publications are scheduled.

“City Hall Park has enormous historical resonance with these works,” Mr. Palmer said. It is at once the administrative heart of the city and the site of recent Occupy Wall Street and Black Lives Matter protests. It was one of the first places where the Declaration of Independence was read publicly. It was also, during the 18th century, part of the site of the African Burial Ground, the largest colonial-era cemetery for people of African descent, some free and some enslaved.

“I think this space really has been enormously important for us as a city, and it’s significant for coming to terms with race in this country and in this city,” Mr. Palmer said.

The park also functions as a particular kind of leisure space where one can, as Mr. Edwards said, find “a rest from the structure of cities” while taking a break for lunch, meeting friends or perhaps stopping to look at art.

“When I make a work in public, it’s not like a stoplight, where you make people go, pause or stop. It’s there and it’s visual, and if the circumstances between the person and the work are right, maybe they stop and pay some attention.”