It turns out being married to a “Saturday Night Live” star isn’t all it’s cracked up to be ― if you want to watch the show without a sense of panic, that is.

Scarlett Johansson, who is married to “SNL” head writer and actor Colin Jost, told Kelly Clarkson during her daytime talk show Wednesday that it’s hard for her to tune in to the show nowadays, given that she has such a personal connection to it.

“I now rarely watch the show without having just a sense of not overwhelming panic, just like a slight underwhelming panic,” the “Black Widow” actor told Clarkson to laughs from the singer and the audience.

“Because I just feel like at any moment something’s going to fall apart,” she added. “And that’s the excitement of ‘SNL’ for all audiences, right? Is that it’s absolutely live.”

“But when you’re emotionally invested in it and not just entertained by it, it takes on a little bit of a different life,” Johansson explained. 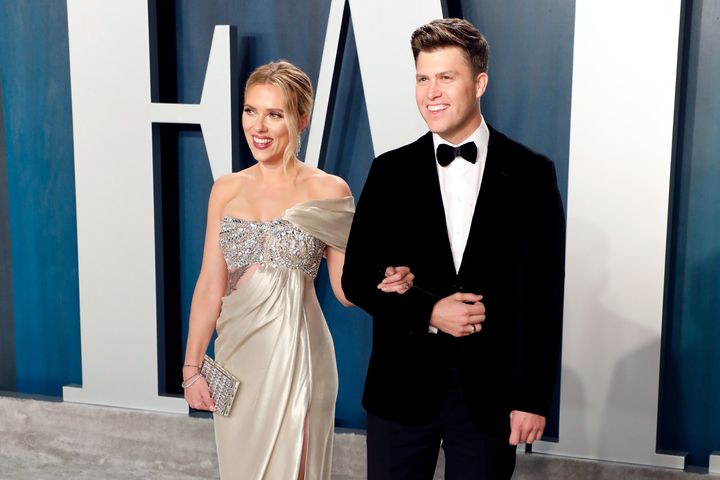 Johansson and Jost initially connected through the late night comedy show in 2006, when the actor hosted and Jost was still a new writer. The two collaborated on a sketch together and the actor made quite an impression on the comedian ― though it didn’t go any further at the time.

“I remember her being beautiful, smart, sweet, and intimidatingly sophisticated,” Jost wrote of his now-wife in his memoir. “And she had a grace and a smile that I’ve still never seen in any other human.”

“She claims that she remembers thinking I was ‘cute,’ but I know what I looked like and that’s not the word I would have used,” Jost quipped, describing his look at the time as “shaggy.”

Though Johansson would go on to marry and divorce actor Ryan Reynolds and journalist Romain Dauriac, she later reconnected with Jost when she hosted “SNL” again in 2017 for the fifth time.

The two dated for three years before tying the knot in October 2020 and revealing their nuptial news on the Meals On Wheels America Instagram. The announcement showed a photo of the ferry of Staten Island (where Jost hails from) and cheekily declared the couple “Jost Married.”

A post shared by Meals on Wheels America (@mealsonwheelsamerica)

The couple, affectionally referred to as “ScarJo,” are reportedly expecting their first child together. Johansson also has a 6-year-old daughter, named Rose, with her second husband.

Jost previously shared in his memoir that he was excited to start a family, but wanted to wait until after he leaves “SNL.”

“It’s certainly not a good place to work while you’re raising a family or nurturing a healthy relationship,” Jost wrote in his memoir. “In terms of ‘family-friendly jobs,’ ‘SNL’ ranks somewhere between long-haul truck driver and Somali pirate.”

“I’ve even woken up on a Sunday after a show and thought, ‘I would love to be raising a baby right now!’” he added. “Which is a far cry from when I used to wake up on a Sunday and think, ‘Can I make it to the bathroom, or should I just puke on this plant?’”