Some celeb lookalikes are easy to spot, while others sneak up on you — but once you see it, it can’t be unseen. Ryan Reynolds reacted to Kate Beckinsale being his lookalike on the Today show, and apparently, the Deadpool star agrees that she’s more or less his doppelgänger. Honestly, we thought Beckinsale was a little nuts when she first mentioned it in October, but after staring at photos of these two celebs for an unhealthy amount of time, our brains are… kind of starting to see it?

Reynolds was chatting with Today’s Hoda Kotb and Craig Melvin when the subject of Beckinsale came up. After playing the Tonight Show clip where Beckinsale first suggests she and Reynolds look alike, they ask Reynolds what he thinks.

“It is like looking in a mirror,” Reynolds joked, looking at a photo of Beckinsale in a gown. “I mean, I was going to wear that today!” Fashion choices aside, the Aviation Gin owner said she has a point. “This has been something that I’ve heard for a long time,” he told the hosts. “Other people have said it to me as well.” We’re shocked — and seriously delighted to hear it.

While Reynolds and Beckinsale have admired their resemblance from afar, their actual relationship is pretty limited: “We met one time,” the actor said on Today. And during that “one time,” they didn’t do the world a favor and take a photo together — so we put together this side-by-side instead. 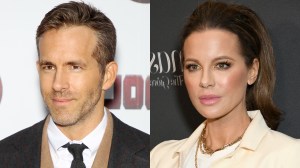 So: do you see it?! Celeb lookalikes of any kind are thrilling, whether they’re celebrity twins, celebrity siblings or total strangers. But we’re calling it now, with 18 days left in the year: Ryan Reynolds and Kate Beckinsale is the craziest celeb lookalike pairing on 2019 — and (dare we say it?) possibly the craziest of the decade too.