With his toothy smile and tousled blond curls, the London-born newcomer charmed the cameras on Sunday, accompanied by equally lovable “Jojo Rabbit” co-star Archie Yates. The two pals leapt into the air, flashed peace signs and looked overjoyed to be present for the Hollywood hoopla. Later in the night, when Taika Waititi accepted Best Adapted Screenplay for “Jojo,” Davis had a huge grin on his face.

“Jojo Rabbit” is Davis’ first movie, but he navigated awards season like a pro. From the minute Waititi’s Nazi satire premiered at the Toronto International Film Festival in September, Davis was a star. He’s since been nominated for a Golden Globe, scored a Critics’ Choice Award and booked a part in “Silent Night,” his mother’s directorial debut.

But what’s it actually like to attend these events on behalf of your big-screen inauguration before you’re even a teenager? I hopped on the phone with Davis on Monday afternoon to talk all things Oscars, including his love for Joaquin Phoenix, Elton John, Eminem, Bong Joon Ho and “Uncut Gems.” 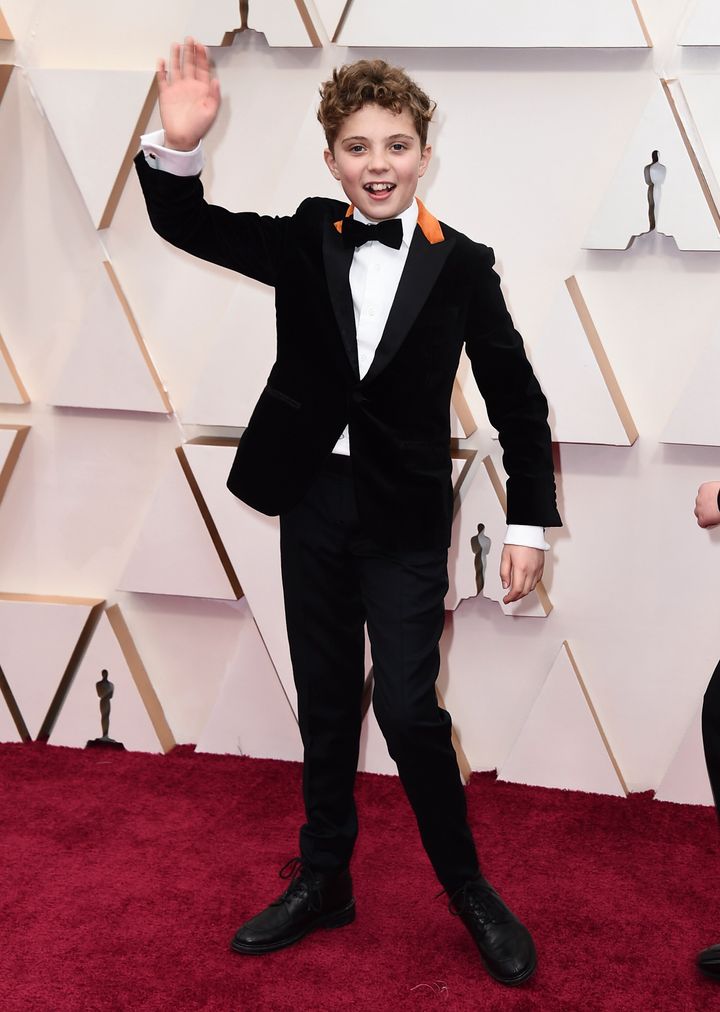 How are feeling today?

How much sleep did you get?

At this point, you’ve been around the block a few times with these award show red carpets. By the time the Oscars rolled around, did you feel like a pro?

No, not really. I mean, they’re actually really difficult, those red carpet things. They’re actually a lot harder than they’re made to look on the show. But I loved Joaquin’s speech. It was amazing.

What do you think is the hardest part about red carpets?

Hmmm, probably actually trying to get the clothes for it. It’s so hard. And especially for me because I’m, like, a child and there’s no children’s suits. I’m wearing suits that are made for adults. I feel like the Grim Reaper because they’re so long. But I was so lucky because [director] Matthew Vaughn created me a suit from his clothing line, Kingsman. It’s amazing. 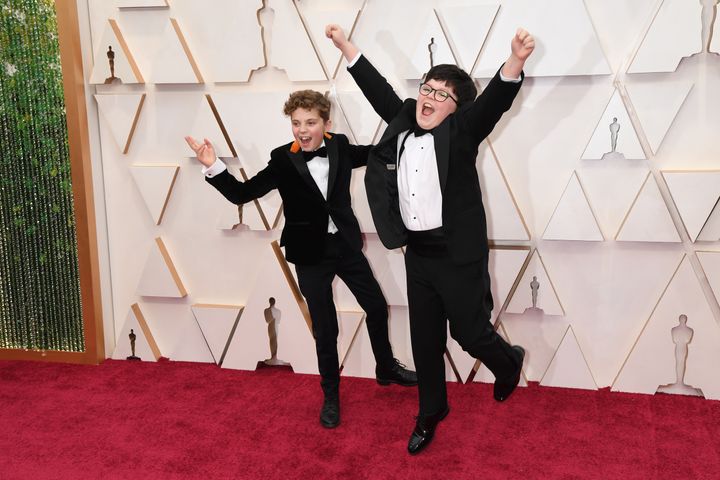 You looked great. If the hardest part is the prep, once you and Archie finally stepped onto the red carpet, did it get easier?

We both felt really privileged and fortunate to be there. I personally did. I just felt like I had a really big responsibility, and I’m really happy and I’m really grateful. But I mean, there is no practicing for it. We used to watch this on TV, and all of a sudden we’re on the red carpet. It’s hard because you’re trying to fit people’s needs and sometimes you don’t know what they really want.

One of the moments when you looked the happiest was Taika accepting the award for writing “Jojo Rabbit.”

I had a tear in my eye and I stood up and jumped. I was so happy. I felt like he fully deserved it. I loved his script. I remember my mom [Camille Griffin] telling me about the script when I first did the audition. She was like, “I cried about 13 times during this. It’s the most beautiful thing.” The whole reason the movie was so amazing is because of the script. I think it’s a work of genius. Or a work of art. Is that even a word? A work of genius?

I think that works.

OK, we can call it a work of genius.

What was the coolest musical number to watch live?

Elton John, definitely. I mean, oh my god. That was amazing. That man is so amazing. His music is amazing! I love his music. Who doesn’t? Who doesn’t like his music? I want to know! It’s probably like five people in this world. I saw the film “Rocketman,” and he’s amazing. He’s a survivor, he is. He’s a genius and a survivor.

Who did you get to meet last night who you hadn’t already met at other events throughout the season?

Well, I wanted to meet Eminem, but my dad was having a margarita, so we didn’t see him perform and I’m still really annoyed about that. We were at the bar, and I remember looking at the TV and seeing Eminem rapping and everyone clapping along. I was so annoyed! At least his margarita was good. My dad just said it was a really good margarita.

At least there’s that. Who did you hang out with at the after-party?

Well, we went to Vanity Fair and there were so many cool people there. We saw amazing filmmakers, in front of the camera and behind it. Who would you say is the most exciting person you met during the season?

Had Eddie sent those flowers because you guys were nominated in the same category?

I think so. He’s so nice. Everyone I’ve meet so far has been so nice and kind to me. I’m really thankful for that. Daniel Craig also sent me a scarf. They’ve all been really nice to me, all the actors I’ve met.

It’s encouraging to know you’ve had such a lovely experience for your first movie.

Yeah, and I’m fortunate that people are watching it and caring for it. It’s really relevant to today’s times, unfortunately.

Based on the after-party last night and other events you’ve been to, who is the better dancer: you or Archie?

Archie. I cannot compete with him. I mean, Sam Rockwell’s probably the best dancer I’ve seen, but he’s like a proper dancer.

I haven’t seen Taika dance. If he tried to dance, I think he’d break his leg. I saw him jump in this photo shoot we had to do, and he could barely do that. Maybe he’s a good dancer, but I haven’t seen him. Just get him a couple of drinks and maybe then we can find out. 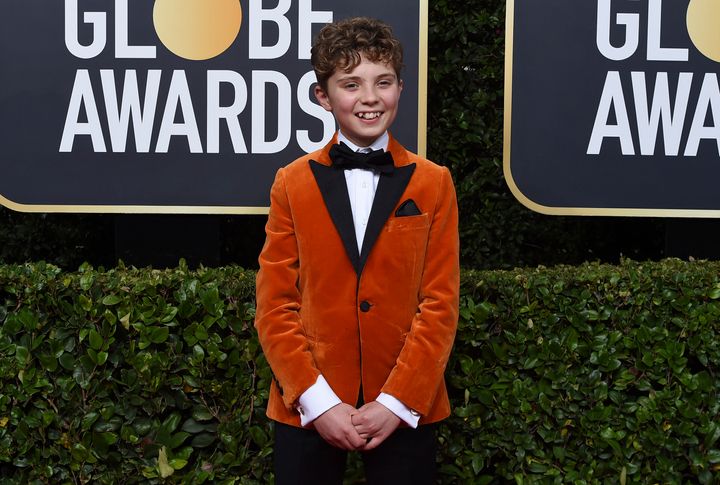 Since “Jojo” opened and got a ton of award nomination, have you been reading a lot of scripts?

I’ve been reading the script I’m working on, but I haven’t read that many. I’ve read a couple of books actually, but I’ve read my mother’s script [for “Silent Night,” a Christmas movie co-starring Keira Knightley and Matthew Goode] and I’m about to go read it again to fully understand it. But it’s kind of amazing because I can just ask him all the questions. Or her, sorry. I don’t know why I called my mother a “him.” That’s weird. But yeah, I’m just focusing on the film I’m working on right now.

What’s the single best memory you have from last night?

Probably hearing Joaquin’s speech and Taika getting his award.

Have you gotten to meet Joaquin?

Yeah, he’s the most extraordinary guy in the world. And he really cares about the planet. He’s genuinely caring and considerate.

Other than “Jojo Rabbit,” what were your favorite movies last year?

“Uncut Gems” was amazing. I met Adam Sandler. He’s great. I loved it. And that film has a really important message. It’s a great film. We watched “A Beautiful Day in the Neighborhood.” Father and I really loved that film. I haven’t seen many, or I can’t, really, because I’m not allowed into the theaters. But I know there are the most extraordinary people. Actually, I met Bong Joon Ho, which was great. I loved “Okja.” I actually made a choice to become a vegetarian because I loved it so much.

This interview has been edited and condensed.