Roger Berlind, who produced or co-produced more than 100 plays and musicals on Broadway, including such critical and box-office hits as “The Book of Mormon,” “Dear Evan Hansen,” “City of Angels” and revivals of “Guys and Dolls” and “Kiss Me, Kate,” died on Dec. 18 at his home in Manhattan. He was 90.

His family said the cause was cardiopulmonary arrest.

During a four-decade career in the theater, Mr. Berlind backed some of the most original work on Broadway and amassed an astonishing 25 Tony Awards, one of the largest hauls on record. (Hal Prince, another prodigious Tony-winning producer, collected 21.)

Mr. Berlind helped bring buoyant musicals to the stage, like the smash 1992 revival of “Guys and Dolls” with Nathan Lane, as well as sophisticated literate dramas, like the original 1984 production of “The Real Thing,” Tom Stoppard’s dazzling exploration of the nature of love and honesty. “The Real Thing" swept the Tonys, winning for best play and best director (Mike Nichols) and garnering top acting awards for Jeremy Irons, Glenn Close and Christine Baranski.

His route to Broadway was indirect. Able to play the piano by ear, he fancied himself a songwriter, but his dream of making a living that way fell flat and he went to work on Wall Street.

He was a partner at a brokerage firm when tragedy struck: His wife and three of his four children were killed in an airliner crash at Kennedy International Airport. Within days, he resigned from his firm.

“The whole idea of building a business and making money didn’t make sense anymore,” he told The New York Times in 1998. “There was no more economic motivation.”

After a period in the wilderness, he found his way to Broadway, which helped him rebuild his life and establish a whole new career.

“The significant thing about Roger is that he made an incredible turnaround,” Brook Berlind, his second wife, said in a phone interview.

“His life was utterly bifurcated by the accident,” she said. “There was Act I and Act II. I don’t think many other people could have gone on to such success after such catastrophe.”

Success on Broadway came slowly. Mr. Berlind’s first production, in 1976, was the disastrous “Rex,” a Richard Rodgers musical (with lyrics by Sheldon Harnick) about Henry VIII, which the Times theater critic Clive Barnes said “has almost everything not going for it.” 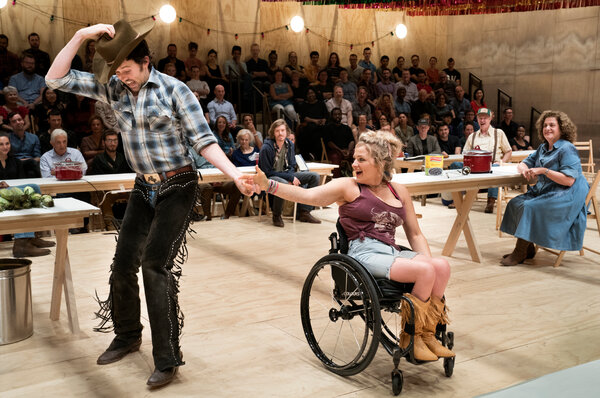 As it happened, the music of Mr. Rodgers bookended Mr. Berlind’s career. His last show, of which he was one of several producers, was the darkly reimagined Tony-winning 2019 revival of Rodgers and Hammerstein’s “Oklahoma!” (That show made Broadway history when the actress Ali Stroker became the first person who uses a wheelchair to win a Tony.)

After “Rex,” Mr. Berlind co-produced six other shows before he had his first hit with the original 1980 production of “Amadeus,” in which a mediocre composer burns with jealousy over the genius of Wolfgang Amadeus Mozart. The play, written by Peter Shaffer, directed by Peter Hall and starring Ian McKellen and Tim Curry, took home several Tonys, including best play.

Two more successes quickly followed: “Sophisticated Ladies,” a 1981 revue with music by Duke Ellington; and “Nine,” a 1982 musical based on the Fellini film “8½” about a tortured film director facing professional and romantic crises.

Along the way were plenty of flops. Producing on Broadway is always risky, with no surefire formula for a hit. It became even more challenging in the late 20th century, as theater people migrated to Hollywood, labor and advertising costs soared and high ticket prices discouraged audiences. Getting shows off the ground required more and more producers to pool their resources, and even then they were unlikely to recoup their investments.

One of Mr. Berlind’s achievements was staying in the game. Despite the challenges, he took chances on shows because he believed in them, and because he could afford to lose as often as he won.

His successes included “Proof,” “Doubt,” “The History Boys,” the 2012 revival of “Death of a Salesman” with Philip Seymour Hoffman and the 2017 revival of “Hello, Dolly!” with Bette Midler.

Scott Rudin, who produced about 30 shows with Mr. Berlind, said that Mr. Berlind was propelled by “enormous fortitude and persistence.”

“He was not dissuaded by the obstacles that dissuaded other people,” Mr. Rudin said in an email. “He had enormous positivity, which is much, much more rare than you might think.”

That became evident after the terrorist attacks of Sept. 11, 2001, when Broadway went dark for 48 hours, a sign of the economic uncertainty that hung over the city.

At the time, Mayor Rudolph W. Giuliani urged theaters to reopen quickly, and they did. But a half-dozen shows closed, and one on the verge of doing so was “Kiss Me, Kate,” in which Mr. Berlind had been deeply involved and of which he was enormously fond. He was enthralled with Cole Porter’s music, and everything in the show had clicked. The winner of five Tonys, including best revival of a musical, “Kate” had been running for nearly two years and was not scheduled to close until Dec. 30, 2001.

But because of a sharp drop in ticket sales, the production was going to close early. A closing date of Sept. 23 was announced.

Just before the curtain rose on what was supposed to have been the final performance, Mr. Berlind, a modest man who evinced little of the showmanship typical in the theater, took to the stage. He held the closing notice in his hand and ripped it up.

“The show will go on,” he declared, to an already emotional audience.

The cast and crew had agreed to give up 25 percent of their pay and to donate another 25 percent to buy tickets to the show for rescue workers. The move allowed “Kate” to keep running until its scheduled Dec. 30 closing.

“That was my Merrick moment,” Mr. Berlind later told The Guardian of London, referring to David Merrick, one of Broadway’s famously outsize showmen.

The Guardian went on to praise Mr. Berlind’s exuberant London production of “Kate,” which opened that October, as “a symbol of the indomitability and grace under pressure of a community, indeed a city, that has been reeling since 11 September.”

Roger Stuart Berlind was born on June 27, 1930, in Brooklyn to Peter Berlind, a hospital administrator, and Mae (Miller) Berlind, an amateur painter who gave painting lessons while raising her four sons.

The family moved to Woodmere, on Long Island, when Roger was 3. He attended Woodmere Academy and went on to Princeton, where he majored in English.

His campus life revolved around the theater. He joined the Triangle Club, which performs student-written comedies, and Theatre Intime, a student-run theatrical organization. Years later, in 1998, he donated $3.5 million to build the 350-seat Roger S. Berlind Theater as part of an expansion of Princeton’s McCarter Theater.

After graduating in 1952, he joined the Army and served in the Counterintelligence Corps in Germany. At one point he was on a troop ship with Buck Henry, the comic actor and writer who died this year, and the two regularly created shows for the soldiers.

When Mr. Berlind returned to New York in 1954, he was determined to become a songwriter.

“He loved the big-band music of the ’40s, he could play almost any song from the American songbook and he had a great memory for lyrics,” his son William said in a phone interview. His own tunes ran to the simple and nostalgic, as reflected by their titles, “Lemon Drop Girlfriend” and “Isn’t It a Rainbow Day?” among them. But Tin Pan Alley was uninterested, and, needing a job, Mr. Berlind was pointed by friends to Wall Street.

“I had never had an economics course in college,” he told Playbill in 2005, “and I had 26 or 28 interviews before anyone would hire me.”

He worked for four years at an investment house, then in 1960 co-founded a brokerage firm, Carter, Berlind, Potoma & Weill, which went through various iterations until it was acquired by American Express in 1981. His partners along the way included Sanford I. Weill, who became chairman and chief executive of Citigroup, and Arthur Levitt Jr., the future chairman of the Securities and Exchange Commission.

He had gone to the airport that day to meet his wife, Helen Polk (Clark) Berlind, and three of their children — Helen, 12; Peter, 9; and Clark, 6 — who were returning to New York from New Orleans after visiting Helen Berlind’s mother in Mississippi.

While on approach to Kennedy in a severe storm, the Boeing 727, Eastern Air Lines Flight 66, was swept down by a wind shear and crashed, killing 113 of the 124 people on board, including Mr. Berlind’s family.

Their son William, 2, was at home in Manhattan with his nurse at the time. As he grew up, he had unresolved issues around what had happened.

“Roger was so damaged by the accident that he didn’t spend as much time with William on this subject as he could have,” Ms. Berlind, who married Mr. Berlind in 1979, said.

Finally, a psychiatrist told Mr. Berlind that he needed to answer William’s questions, even if he asked the same thing over and over. Eventually, this proved therapeutic for both father and son.

“He was present and strong for me,” said William Berlind, a former reporter at The New York Observer and writer for The New York Times Magazine, who followed his father to Broadway and collaborated with him on several shows.

“He was marked by the tragedy,” he added, “but it didn’t consume him, and he persevered.”

In addition to his wife and son, Mr. Berlind is survived by two granddaughters and a brother, Alan.

In time, friends connected Mr. Berlind with people in the theater, and he was soon immersing himself in the entire process of putting on a show. He had a reputation for generally being more mindful than many producers about not interfering with the creative process.

But Mr. Berlind always insisted that the work he backed have merit. While he kept a cold eye on the bottom line, he could be seduced by sheer artistry.

“He had been a tough and successful businessman, but in his theater life he was besotted by talent, and that’s what he invested in,” Rocco Landesman, who produced “Guys and Dolls,” “Kiss Me, Kate” and “Proof” with him, said in an email.

“He loved his flops almost as much as his hits,” Mr. Landesman added. “And whenever one of his shows closed, Roger was ‘available’ again.”