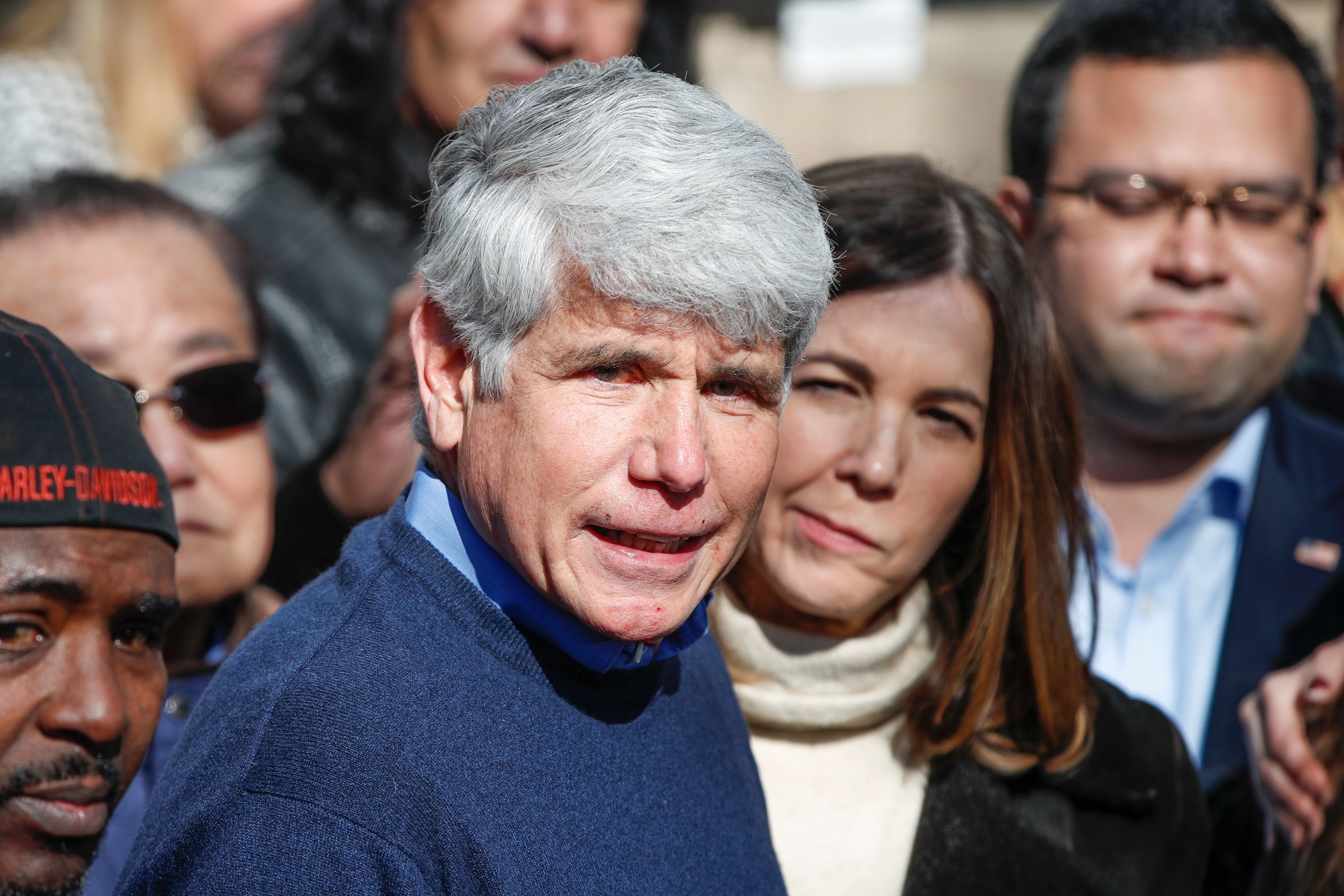 “I’m bruised. I’m battered. I’m bloody,” he declared to the crowd of supporters gathered outside his Chicago home, constantly dabbing a tissue covered in blood to a shaving wound on his chin.

“Long time since I shaved with a normal razor and it takes a little bit of practice,” said the onetime Apprentice contestant. “Sorry about this blood.” 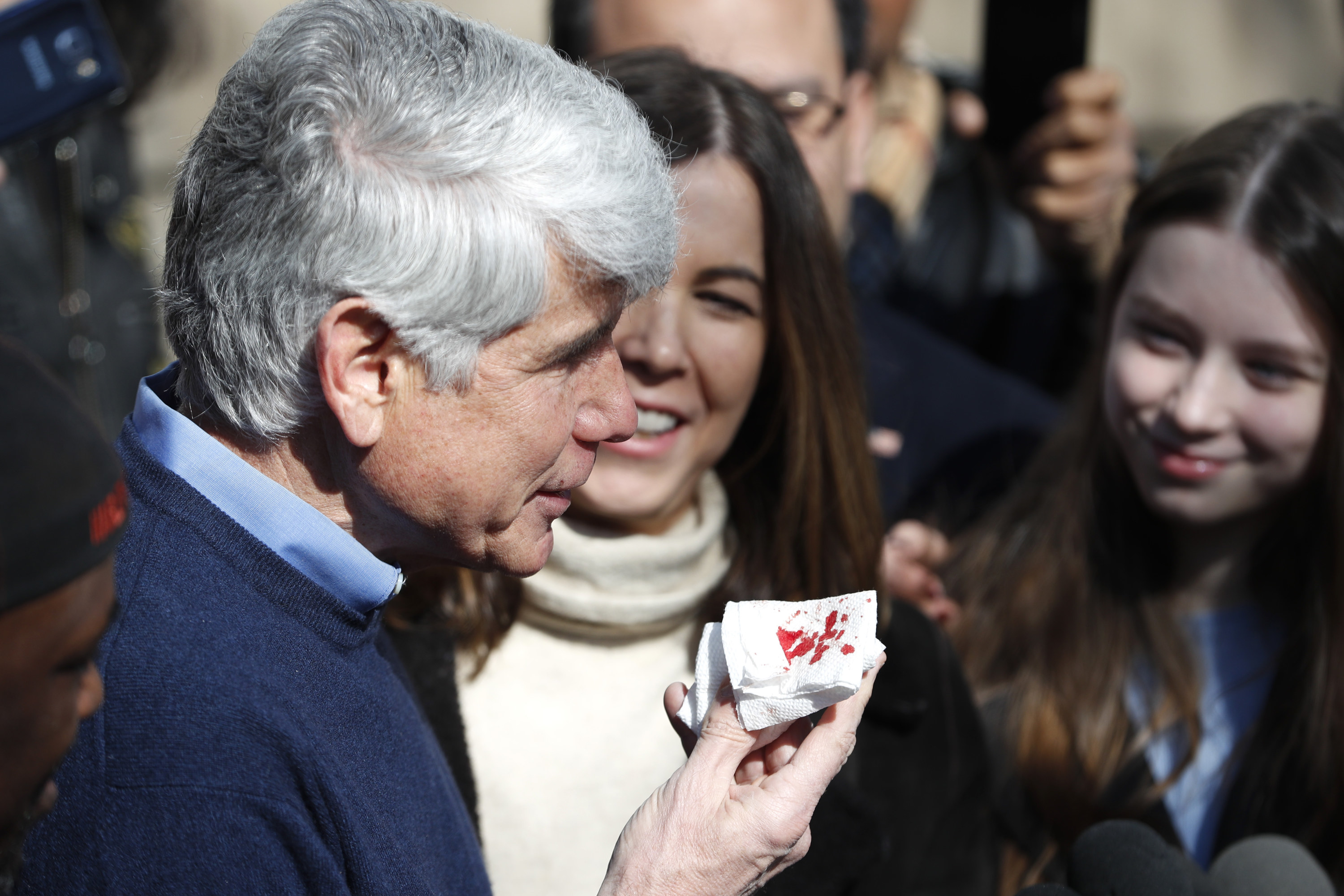 Blagojevich looks at blood from his chin during a news conference outside his home.

On Tuesday, he was one of 11 people issued pardons and clemency by Trump, after months of the president indicating he would likely commute his sentence. Blagojevich served eight years in prison.

In 2009, Blagojevich was convicted for trying to sell off the vacant Senate seat of Barack Obama. Wiretapped phone call recordings showed him looking for the highest bidder.

He stood outside his home Wednesday with his wife and two daughters, where supporters occasionally shouted “Make Chicago Great Again” and declared himself a “Trumpocrat.”

“How do you properly thank someone who has given back the freedom stolen from you?” asked Blagojevich, saying his family gives “our most profound and everlasting gratitude to President Trump.”

“As a Republican president, he didn’t have to do this,” said Blagojevich, who was a Democrat before the party disowned him for his crimes. “I’ve got 10,000 reasons to be thankful to President Trump.”

Blagojevich praised the president, whom he said he would vote for if he is able (Illinois is one of the few states to allow formerly incarcerated people to vote), multiple times throughout the press conference. He declared him “tough and outspoken but he also has a kind heart.” 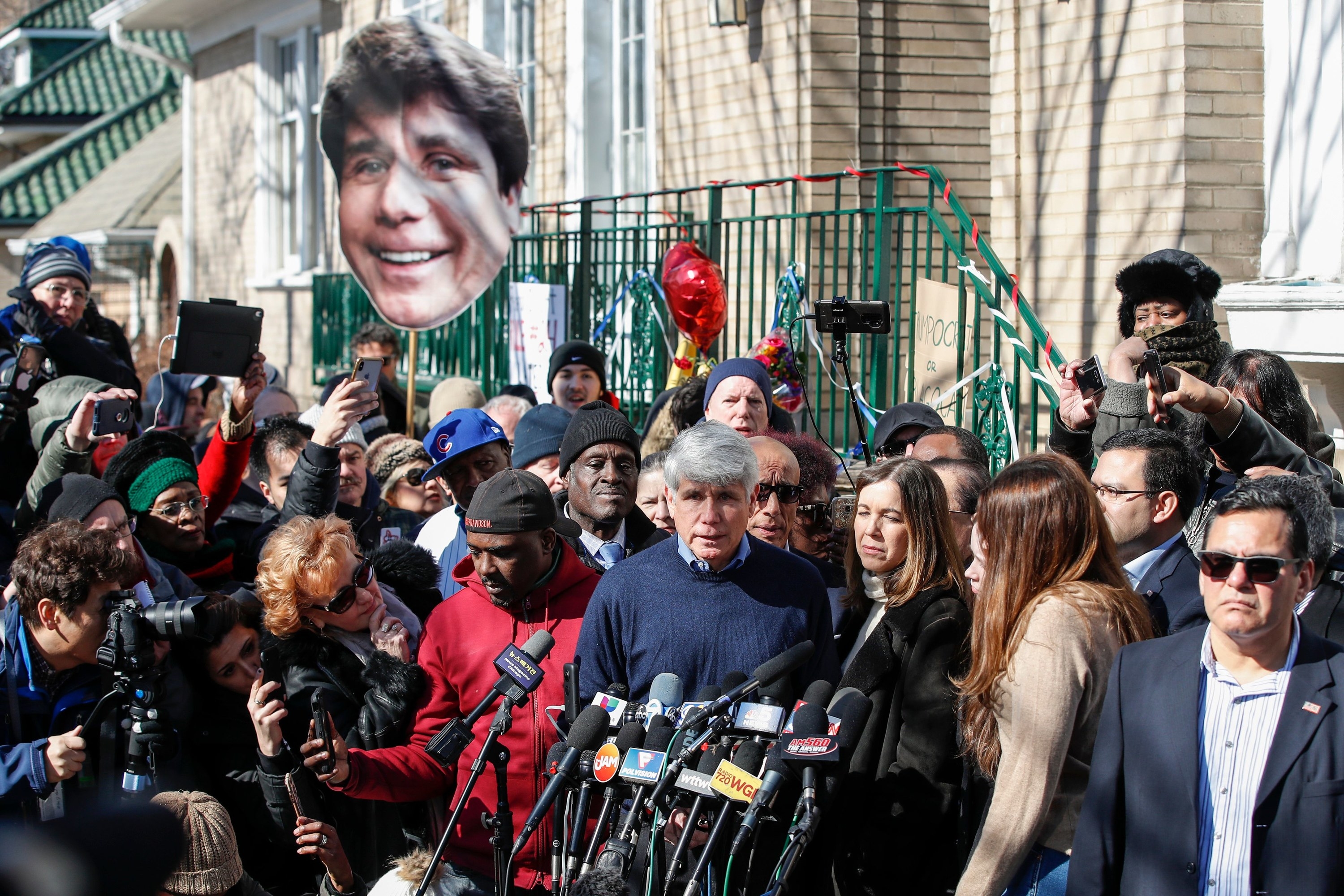 The former inmate described his time in prison in graphic detail, calling the sleeping quarters where he lived with 900 other prisoners “squalid places, cold and dark, like tombs.”

He said he slept on the top bunk of a 6-foot-by-8-foot prison cell with a small window with bars on it, and would look out of it and dream about his family. “Thank you for waiting,” he declared to his wife, Patti.

“Every mile I ran, every push up I did, every book I read,” said Blagojevich, “was my way of fighting back.”

The disgraced politician spoke out against the criminal justice system as “the new Jim Crow in America” and vowed to change it.

He promised to work to end the “corrupt criminal justice system,” noting that “no one has done more to fix this system …. than President Trump and Jared Kushner.”

The president tweeted after the press conference that Blagojevich had “paid a big price” and never actually sold the Senate seat.

Blagojevich did not take any questions from reporters but autographed a giant cutout poster of his head before going back inside.