Ric Ocasek was a versatile singer, songwriter, guitarist, keyboardist and producer with a vast array of interests, from high art to lowbrow trash. Few rock stars succeeded so well at sliding fringe ideas and sounds into the popular mainstream. His heyday ran from the Cars’ 1978 debut until the late 1980s, when the band broke up and Ocasek focused on being a producer and helping new bands find their sound. His increasingly rare solo albums felt indifferent until 2011, when he reformed the Cars (minus Benjamin Orr, who died in 2000) to compete with a new generation of bands influenced by the Cars’ sleek brand of social alienation. Here are 11 of his essential songs. 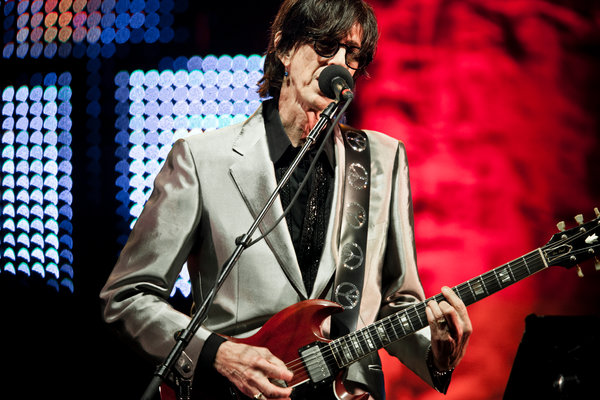 When the first Cars album came out, Ocasek was already in his thirties, a veteran of several also-ran Boston bands. The most important skill he’d learned was concision: The first two Cars albums have an almost Motown-like sense of efficiency and purpose. The name of their self-titled debut’s opening track dates back to R&B romps of the ’40s and ’50s, but as usual, Ocasek’s goal was to undermine a familiar conceit. “Let them brush your rock ’n’ roll hair,” he sings in this steely song about insouciance. And with “If the illusion is real, let them give you a ride,” he foresaw everything to come in the 1980s.

The group’s debut single, which has been made ubiquitous by its use in Circuit City ads, established a trademark sound based around Ocasek’s clicky, eighth-note rhythm guitar parts. This dynamic track, sung by the bassist Benjamin Orr, who had a smoother voice, opens with a guitar lick Ocasek nicked from the Ohio Express’ 1968 bubble gum hit “Yummy Yummy Yummy,” a song that was big when Ocasek and Orr met in Cleveland in the mid-60s.

Ocasek wrote about love with an outsider’s skeptical view, and he liked to hide dark or funny ideas in songs that seemed as romantic as prom themes. “When I was crazy, I thought you were great,” Orr sings on this track from “Candy-O,” giving Ocasek’s lyrics a knowing, stoic delivery. The Queen producer Roy Thomas Baker makes the song gleam, and the riff genius Greg Hawkes brightens the track with skittering synthesizer chorus hooks.

This stomping track opens with a typically biting but melodic guitar solo from Elliot Easton, who propels it through an action-packed, under-three-minute length. Ocasek sounds agitated about his puzzling love life, which he sums up at the end of a final verse with a question for his devious partner: “How can I hold you when you’re waving goodbye-bye?”

The Cars were one of the few American new wave acts that could fill arenas. But Ocasek was drawn to musical extremes (“I loved the Velvet Underground and the Carpenters,” he once said), and he championed the confrontational New York electronic-terror duo Suicide by producing their second album and perversely anointing them as the Cars’ opening act — each night, hostile fans pelted Suicide with garbage. Suicide’s influence is also obvious on the Cars’ frosty third album, “Panorama,” and “Misfit Kid,” about a rebel who baffles even himself, might be Ocasek’s ode to the notorious duo.

After the commercial failure of “Panorama,” the Cars retrenched on their next album, “Shake It Up,” though they couldn’t recover the melodic inspiration of their flawless first two records. Years later, Ocasek even renounced the album’s title song, calling the lyrics “crap.” But “I’m Not the One” is one of his best melancholy ballads, and Easton’s spectacular guitar fills accent the melody like he’s channeling George Harrison.

Ocasek wanted Boston to have its own version of Andy Warhol’s Factory, so the Cars built a state-of-the-art recording studio on Newbury Street, where local bands could record at under-market rates. Then he brought the San Francisco band Romeo Void to Boston, and co-produced their four-song “Never Say Never” EP. On the kinetic, not-safe-for-work dance track “Never Say Never,” the singer Debora Iyall sneers at an admirer, while the orderly bass guitar and the chaotic saxophone fight for domination.

They’d drifted away from the mainstream, but in 1984, one of pop music’s greatest years, the Cars released an album with five hit singles, making them bigger than ever. The creamy ballad “Drive,” crooned by Orr, hides sinister feelings inside a romantic facade: “Who’s going to plug their ears when you scream?” indeed. Working with a new producer, Mutt Lange, a controlling taskmaster, exhausted the group and left them estranged. Though “Drive” went to No. 3, the end was near.

Some of the songs on the meandering pre-breakup album “Door to Door” had been around for years, but never seemed good enough to record. On the bustling “Leave or Stay,” which had been the Cars’ frequent opening song 10 years earlier as a Boston club band, Ocasek returns to a sour vision of love he’d grown away from: “Well, I could leave or stay/Makes no difference either way.”

Of all the people you’d pick to sing this sunshiny kids’ song from Disney’s “Song of the South,” Ocasek is behind only Axl Rose and Diamanda Galás. But he convincingly turns it into a new wave hip-swinger, adding a synth hook and steel guitar solo to his enthusiastic delivery. Nothing’s funnier than hearing an alienated rock star exult, “What a wonderful day!”

Ocasek was a producer and a gentle mentor to lots of offbeat bands — Bad Brains, Weezer, Bad Religion, Nada Surf, Le Tigre — and on his frequent solo albums, he put together ad hoc lineups of younger musicians (and, usually, the Cars mainstay Hawkes) to reach for a new sound. “You promised me some real trash,” he sings on “The Next Right Moment” from “Troublizing,” sounding disappointed by the dull material that’s filling his garbage can.