Coronavirus travel restrictions don’t prevent the mentalist from visiting your head in this hourlong online show. 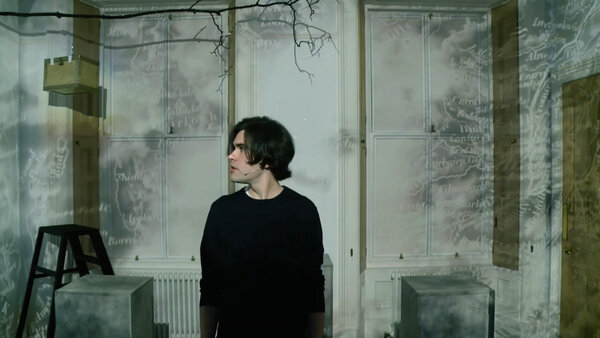 Maybe it’s not so hard to know what people are thinking right now. If you approached random adults in my corner of Brooklyn and hazarded “vaccine” or “the election” or “school reopening,” you might startle them. But you probably wouldn’t be wrong.

Scott Silven has more refined methods. A debonair Scottish mentalist, he has entertained New York audiences with jaw-droppers like “Wonders at Dusk” and “At the Illusionist’s Table.” That one had a trick that delivered its climax on a slice of chocolate cake.

It is difficult to serve dessert from rural Scotland, where Silven ostensibly retreated once the pandemic struck. (He has handsome video to back this up, where he strides across various hilltops looking vaguely Byronic. But trust a magician at your own risk.) So he has partnered with the Momentary, a Bentonville, Ark., performance space nestled in a former cheese factory, to bring his telepathy online. In “The Journey,” an hourlong show directed by Allie Winton Butler, he remotely reads the minds of 30 delighted audience members.

The setting, Silven claims, as he enters a room with elegant moldings, is his childhood home. Did it have blacked-out windows even then? Creepy. With a few props and lots of surprises, Silven enlists audience members in experiments in clairvoyance. The participant appears as a blurry square on the lavender-gray walls of the room, when those same walls aren’t covered with squiggles, crashing waves or topographical maps. The projection designer, Jeff Sugg, has perhaps gone a little overboard.

Like the Geffen Playhouse’s remote magic show, “The Present,” Silven embeds his evening in a somewhat strained framing device. Here it’s a folk tale, a Scottish riff on Rip Van Winkle with some portentous observations about loss and time. (I had a quick look into the relevant folklore; the story seems to be largely Silven’s invention.) In between snatches of the story, he solicits treasured objects and cherished memories from the audience, then reveals that he knew what we would choose all along. 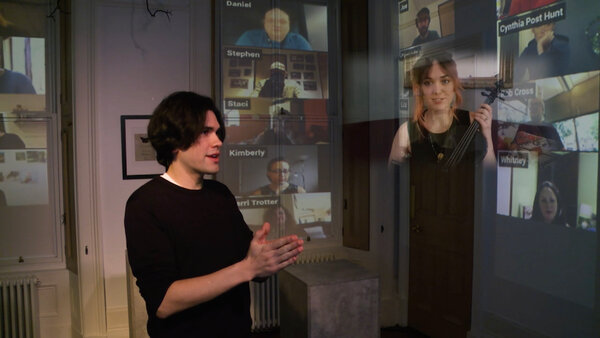 Is it astounding? Absolutely. A graceful pivot to a new medium? Sure. Just when you think you know how Silven might have faked an effect, he complicates the trick, then complicates it again and you are abandoned to wonderment.

That said, there are a few infelicities. There’s a time delay, for one thing. So your image, reversed on Silven’s wall, reacts a beat after you do. Also, you’re supposed to post reactions with the #beginthejourney hashtag, already in frequent use as the slogan for Chickee’s Dance World in Worcester, Mass.

But the main irritant is that frame story. After this many months — indoors, uncertain — my appetite for mysticism has shrunk. I would rather have heard a more realistic tale about Silven himself and what it means to be an entertainer at the height of his powers suddenly removed from any in-person audience. Besides, if you really had awesome clairvoyant talents, couldn’t you have maybe used them to see this nightmare coming or prophesy how we might escape it? Instead we get some philosophical maundering and nifty, nimble tricks.

The finale will seem familiar if you have seen Silven’s previous shows — or Derren Brown’s Broadway outing, for that matter. But like a lot of bumper stickers say, it’s the journey, not the destination, and the trip is a quick and fine one. You don’t need Silven’s powers to predict the furious applause.