Mid-performance at Shakespeare’s theater, his latest tragedy, “Othello,” is humming along. In the audience, the poet Emilia Bassano Lanier looks down upon the players with mounting outrage.

Already, between acts, she has had a dust-up with her magpie of an ex, the playwright, accusing him of presenting her words as his own. Now she hears more of them: things she has said to him coming out of the mouths of his ladies. So Emilia scrambles from her seat and bursts into the scene, where an actor playing one of the ladies breaks character.

“There’s a woman on the stage!” he shouts, scandalized.

It’s a deliciously funny moment, and it’s only deepened by our sudden consciousness of the several layers of theatricality we’ve been taking for granted. Because in Morgan Lloyd Malcolm’s “Emilia,” women play the men playing the women in “Othello.” Women play every role.

A contemporary chiaroscuro fantasy of a bio-play, “Emilia” transferred from Shakespeare’s Globe to the West End last year. Its whole point is to put a woman, Lanier, onstage and surround her in solidarity with an all-female company.

In doing so, this play affirms the life of a daring artist in her own right — startlingly, Lanier published a female-centered retelling of Christ’s Passion in 1611 — and is rumored to have been the Dark Lady of Shakespeare’s sonnets. 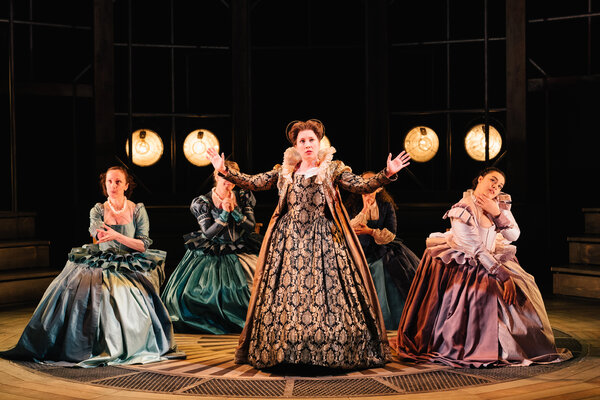 Written, directed, designed and produced by women, “Emilia” is a riposte to the all-male troupes of that time, and to the theater of our own time, in which men still take up disproportionate space. In presenting an English heroine of Italian, possibly Jewish and probably North African descent, it is also a rebuke to xenophobes.

With three fine actresses (Saffron Coomber, Adelle Leonce and Clare Perkins) playing the whip-smart Emilia at different ages, Nicole Charles’s fluid production has a much-doubling cast that gets particularly frolicsome when lampooning sexist nonsense. (Charity Wakefield, as Shakespeare, and Jackie Clune, as Lord Thomas Howard, are especially fabulous.) This play is a lot of fun — and, as riffs on Tudor England go, far more genuinely feminist than “Six,” with its girl-power cosplay.

There is one unfortunate caveat. The performance that is currently streaming (tickets are pay-what-you-can) was shot last year at the Vaudeville Theater in London with just two cameras and not originally intended for public consumption. A note from the producers at the top of the show explains that they have done what they could to improve the sound and picture quality.

But the audio is muddy and uneven — a hazard of archive recordings, not the fault of the sound designer, Emma Laxton, who picked up one of those Oliviers. The live music (by Luisa Gerstein) suffers most. And though the lighting (by Zoe Spurr) looks like it complemented the set (by Joanna Scotcher) beautifully in the space, it is sometimes murky through these cameras’ lenses.

Still, for now this is what we have: a production (made visually poetic by Anna Morrissey’s choreography and movement direction) that stokes the appetite for seeing “Emilia” live somewhere when that is possible again.

This is not a subtle show, and its dialogue comes across at times like sermonizing — not least in Emilia’s final, fiery speech, an exhortation about the transformative power of harnessing righteous anger. But this is drama as a collective act of witnessing, which gains strength and resonance from assembly.

Comic though it often is, “Emilia” is cleareyed about the dangers men posed to women in Lanier’s time, not only in squelching their voices and circumscribing their lives but also in menacing them with physical violence. Those threats, albeit lessened, have not gone away.

The women here get their revenge through mockery — and by hogging all the parts. Because turnabout is fair play.