Prince William and Prince Harry put aside any feud to honor their beloved grandmother after her passing on Sept. 8. However, it wasn’t a gesture that was easily done by either of them because the wounds from their rift run deep.

When the estranged brothers showed up with their wives, Kate Middleton and Meghan Markle, outside of Windsor Castle to greet the crowds, it was done as “a show of unity” for Queen Elizabeth II — it really wasn’t a sign that the feud was over. “It was awkward. Both couples found it hard,” a source told People. “They were in a stoic spirit of just getting through it for the Queen.” The crowds loved seeing the Fab Four together again because it was a reminder of how powerful they were as a group before personal issues got in the way.

The moment was considered “extraordinary historical” because it was “a deeply personal one for the family” who lost their beloved grandmother and monarch, who truly was the glue that held the family together. These fleeting opportunities might have at least opened the lines of communication for the royals because Meghan reportedly wrote a letter to King Charles III asking for a private meeting before she and Harry headed back to California. At this point, any dialogue has to be helpful after the duo was iced out of most Platinum Jubilee events in June.

A second source reminded royal fans that the Queen didn’t live to see her one personal wish come true. “She knew that conflicts were a part of life, and she didn’t hold grudges,” they shared. “Most of all, she wanted to see her family happy.” Let’s hope the entire family finds healing after such a significant loss to their personal and professional lives. 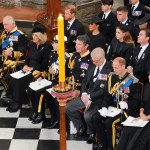