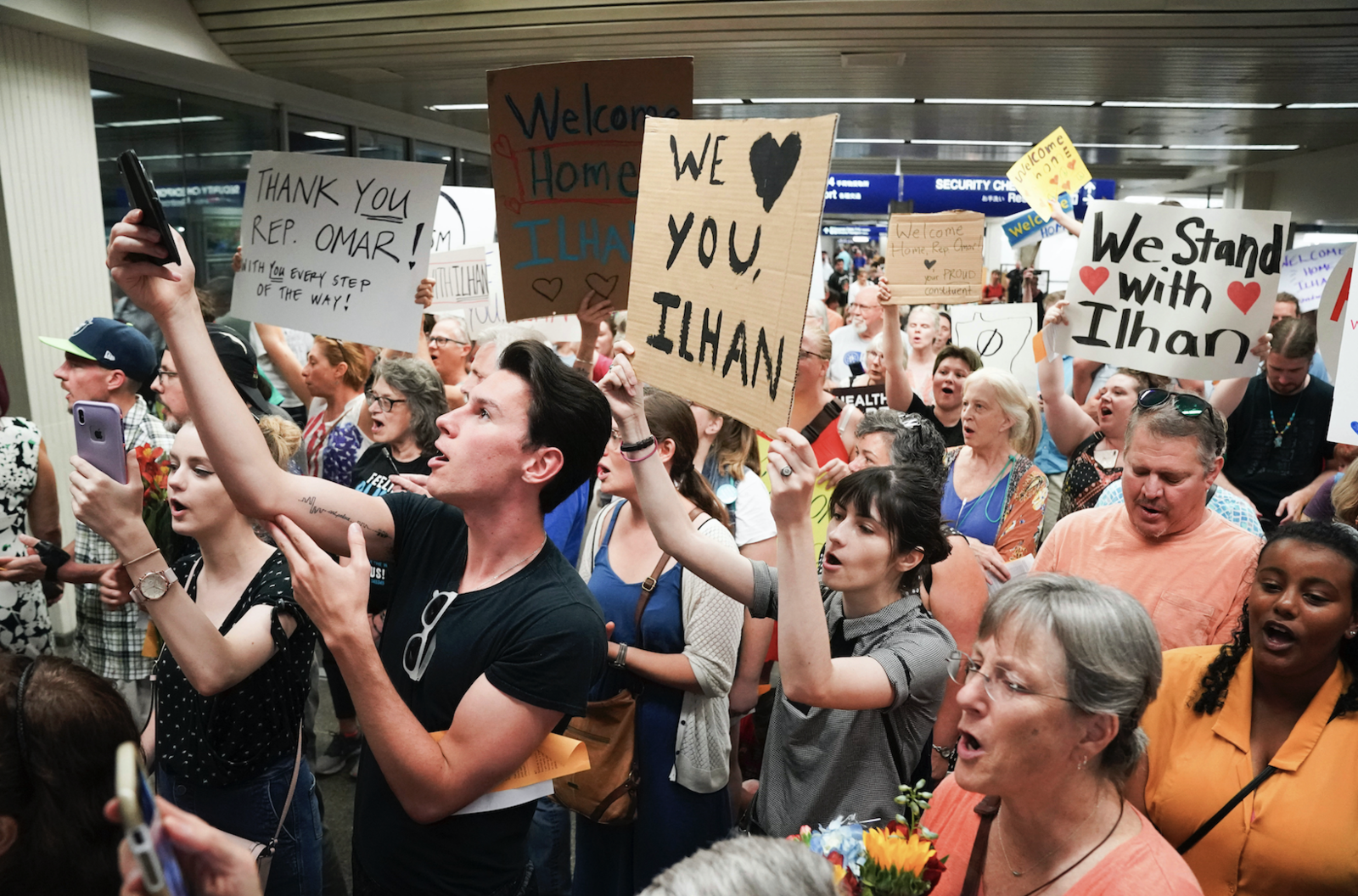 “I don’t know how my comments would be offensive to Jewish Americans,” Ilhan Omar said in January when asked about an old tweet of hers that said Israel had “hypnotized the world.” I believed her then, and I still do today.

But that’s the thing about anti-Semitic tropes: when you’re not familiar with them, talking about the Israeli-Palestinian conflict is like walking into Chernobyl with no protective gear.

It’s not just that I believe that Omar didn’t know how the things she said could be so deeply offensive. I also believe that her misguided rhetoric can normalize violent anti-Semitism. Intentions aside, when a progressive leader uses the same tropes as an anti-Jewish bigot, it makes the ground fertile for ideas from the extreme right to sow themselves into other movements.

Progressives need to reckon with this as they defend Omar from the vile attacks she is receiving from the far right.

They won’t be alone in that reckoning, because of all the people who’ve acknowledged that Omar’s rhetoric around Israel has been anti-Semitic, the most important one has been the congresswoman herself. On multiple occasions she has admitted that she has used anti-Semitic language – and apologized for it.

In 2012, the then Minnesota Department of Education employee sparked controversy when she tweeted: “Israel has hypnotized the world, may Allah awaken the people and help them see the evil doings of Israel.” When she was sworn into Congress years later, the tweet became a cause for alarm for Jewish Americans. So, in January, New York Times editor Bari Weiss explained how accusing the Jewish state of hypnotic powers furthers an anti-Semitic conspiracy theory that Jews are supernatural puppeteers – which fueled our persecution in ancient Rome and Nazi Germany.

After asserting that she had no prejudice towards Jews, Omar apologized to Weiss. “My use of the word ‘Hypnotize’ and the ugly sentiment it holds was offensive,” wrote the Congresswoman. “It’s now apparent to me that I spent lots of energy putting my 2012 tweet in context and little energy in disavowing the anti-Semitic trope I unknowingly used, which is unfortunate and offensive.” Omar then deleted the tweet.

Months later, the Minnesota representative now infamously remarked that strident support for Israel among US lawmakers is “all about the Benjamins,” implying the politicians are paid to support Israel (as if Jewish dollars pull the strings of power.) Not long after, at a town hall, Omar said “I want to talk about the political influence in this country that says it is OK for people to push for allegiance to a foreign country.”

If you’re not Jewish, these words might not sound anti-Semitic to you. That’s the thing about a dog-whistle: only two packs hear it – the marginalized group and their marginalizers. When Omar said “political influence,” both anti-Semites and advocates against them heard “Jews.” When she said “allegiance to a foreign country,” we heard her reference Jews harboring secret allegiance to Israel over the USA, the very same talking point used to mobilize the Holocaust, pogroms, and the Farhud.

Realizing this, the congresswoman apologized on a call with the Anti-Defamation League, the Jewish Democratic Council of America, HAIS, Americans for Peace Now, and Bend the Arc. “I know there are a lot of people who in the last weeks have expressed support in trying to say this isn’t anti-Semitic,” she said, later adding that “I do not want to give space or energy to anyone who wants to minimize the hurt.”

Unfortunately, history shows that you can’t undo the spreading of rhetoric that gets Jews killed. In 1969 in Iraq, nine Jewish citizens were actually hung for being “spies for Israel” in front of 500,000 person audience who danced and rejoiced over their corpses. By the end of the year, 51 more Jewish Iraqis had been murdered by the regime, all due to accusations of dual loyalties.

I doubt that Omar, or most Americans, has ever heard of the hangings of 1969. That’s not prejudice, it’s a blind spot. Her ignorance regarding the hatred of Jews is not in itself hatred of Jews — it’s implicit bias, a concept today’s progressives are keenly aware of.

When you don’t know the history of Jewish persecution or the tropes that have fueled it, they are particularly difficult to avoid.

It doesn’t help that anti-Semitism is characteristically a difficult prejudice to understand. Unlike racism or homophobia, anti-Semitism is not simple hatred; it’s a conspiracy theory. In the mind of an anti-Semite, Jews are not inferior – we are perilously superior, with the skills to enslave, manipulate, and bribe non-Jews. While most kinds of bigot hatefully dehumanize others, anti-Semites obsessively claim powerful Jews have an Illuminati-style invisible hand controlling everything from war to the weather.

Like anyone who’s knee-deep in a conspiracy theory, hardcore anti-Semites religiously memorize every single shred of evidence for their argument. Omar, however, is the opposite. She employs tropes in an absent-minded way.

Last week Donald Trump, looking to use Jews as human shields for his racism, lied when he growled that “Omar has a history of launching vicious, anti-Semitic screeds.” She doesn’t. In fact, she has actively reached out to the Jewish community to protect us.

But Omar has repeatedly blown an anti-Semitic dog-whistle, which white supremacists were happy to hear. One was former Ku Klux Klan Grand Wizard David Duke who applauded her remarks. Ever since Omar’s “the Benjamins” tweet, he has sung her praises, even calling his homeboy Tucker Carlson a “cuck” for attacking her on television last week. If anyone understands anti-Semitism, it’s Duke, who trafficks in it on a daily basis. In his anti-Semitic screeds, which occur multiple times a day, Duke constantly bring up Israel.

There’s a reason why the Israeli-Palestinian conflict is one of the most charged issues in modern politics. Anti-Semites like Duke are frothing at the mouth, just waiting to chime in whenever the word Israel is mentioned. A state that has spent decades steadily absorbing Jewish refugees fleeing anti-Semitism in Iran, Iraq, Ethiopia, China, and Europe plays perfectly into an anti-Semitic narrative of Jews being ultra-powerful. With Israel, Jews can collectively survive in the face of carnage.

In many ways, Israel’s sanctuary has been at the expense of Palestinians. That fact is also exploited by anti-Semites as evidence for their conspiracy theory that Jews are universal oppressors.

The claim that “you can’t criticize Israel without being called anti-Semitic” is, in itself, an anti-Semitic myth. Fifty-nine percent of Jewish voters are critical of some or many of Israel’s policies. The conflict is our Chernobyl, and we want someone like Omar to help lead the cleanup – she just needs to be wearing the right protective gear.

Ariel Sobel is a filmmaker and activist, and winner of the Bluecat Screenwriting Competition. She is a columnist at Jewish Journal and her work has appeared in Haaretz, The Forward and The Advocate.