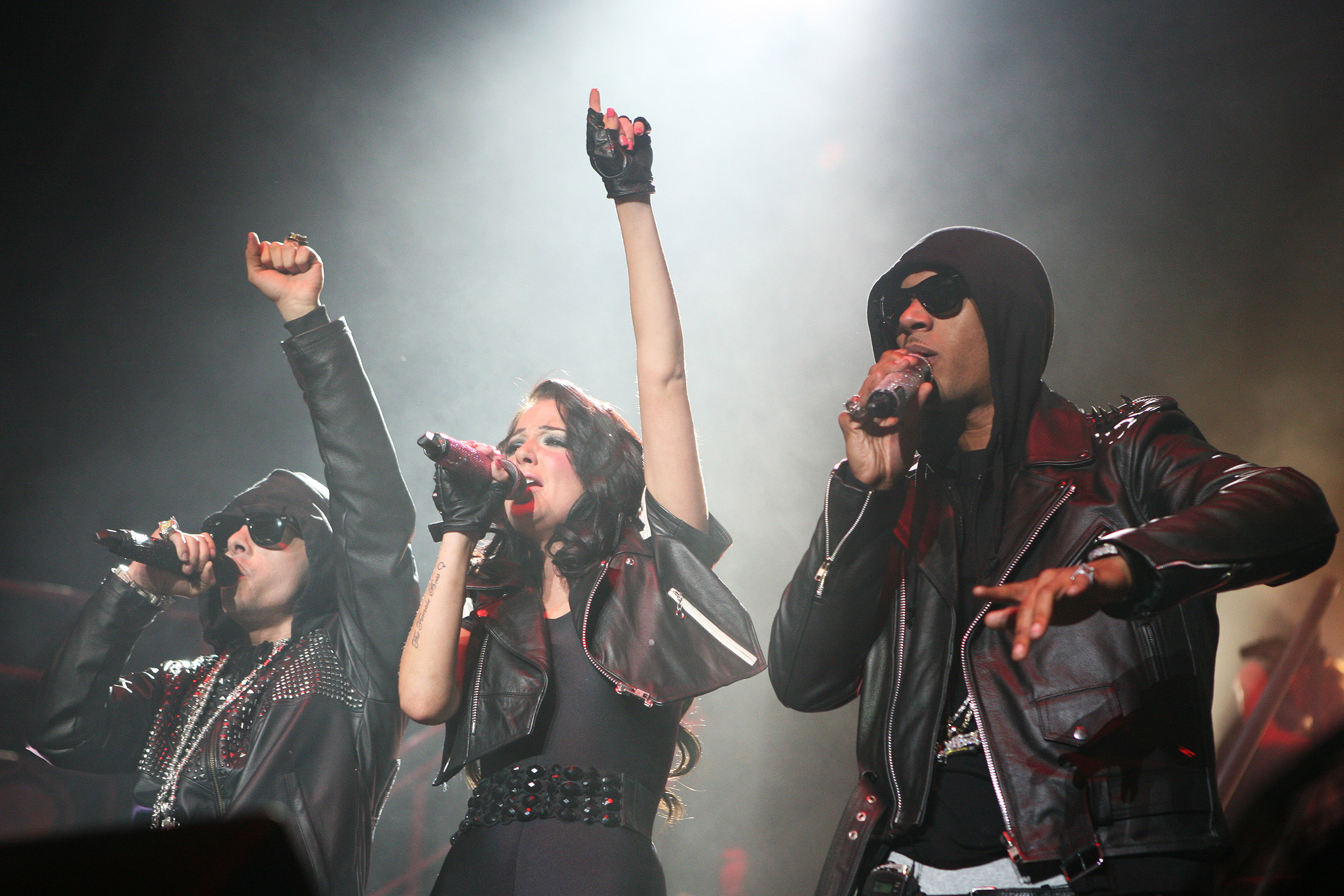 N-Dubz have been slammed by fans after cancelling their latest tour show last minute.

The I Need You hitmakers – consisting of Tulisa Contostavlos, Dappy and Fazer – were due to perform at the Motorpoint Arena on Tuesday evening as part of their sold out Back To The Future tour in the UK.

However, fans who had waited for hours were reportedly given just five minutes’ notice that the show would not be going ahead just before 9pm.

They had already watched support acts perform and were gearing up for the main event when a message announcing the cancellation appeared on the big screen on stage.

In a statement on Twitter, the band said: ‘We’re so sorry we had to cancel the show tonight.

‘We tried to do everything possible to make the show happen, but a doctor advised at the very last minute that Dappy was unable to perform and needed to rest tonight…

He then apologised once the show was axed, writing: ‘I’m so sorry Nottingham.’

Singer-songwriter Fazer shared a photo of himself looking downcast on-stage with disappointed and heartbroken emoji.

Fans are fuming over the abrupt cancellation and said N-Dubz should have given fans sufficient warning before pulling the plug.

One wrote: ‘I get that people get [ill] I do, but to leave us standing around for hours paying £8 a time for a drink is not on, I will come to the rescheduled date but anychance of getting a £12 refund for the hotdog I brought 5 minutes before it being cancelled [sic].’

Another disappointed fan revealed: ‘Cost me £190 to get up here f*****g rediculous I might not beable to get to the rescheduled show [sic].’

One other tweeted: ‘You come back after years to tour and act like this and treat fans like you have when you KNEW he was ill! He posted 5 hours before it even started and before gates opened and let us buy merch then cancel??? Makes no sense and it’s outrageous!’

Sharing their feelings about the situation, another fan wrote: ‘Should have cancelled when dappy put it on his insta save us all wasting our time travelling to the arena.’

Another said: ‘I get if artists are ill but when @TheDappy knew he wasn’t performing 3 hours before you announced it and 5 mins after you were due on stage is not on.’

Many others questioned the fact that the Nottingham show was cancelled but tonight’s gig at London’s O2 Arena will seemingly be going ahead.

N-Dubz’s tour marks their comeback to the stage after a decade-long hiatus.

The trio rose to fame in the late 2000s and earned their first number one in 2009 with their Tinchy Stryder collaboration Number 1, while their first two albums, Uncle B and Against All Odds have been certified platinum in the UK.

The group have won four Mobo awards, including best newcomer in 2007, best album and best act in 2009 and best song in 2010 and were nominated for the Brit award for best British single in 2010.