For much of the 19th and early 20th centuries, American artists believed they lived in a cultural backwater. They yearned to sail to Europe to study painting and crane their necks at the Sistine Ceiling. But at a certain point, the direction of travel was reversed. New York became the imperial art capital, and European artists considered it obligatory to come here and meet the gang. When did that moment occur? Perhaps on Dec. 3, 1963, when Mario Schifano, a 29-year-old Italian artist enamored of novelty, arrived in New York.

His adventures in the New World are the subject of “Facing America: Mario Schifano, 1960-65,” a fascinating excavation of an overlooked figure at the Center for Italian Modern Art, which occupies a homey loft in SoHo. Although Schifano remains little-known in this country, he is celebrated in Italy as an avatar of postmodernism. He was also an outsize personality. A self-styled wild child in the countercultural tradition, he was jailed multiple times on drug-related charges and died in Rome of a heart attack in 1998, at the age of 63.

The show is not a retrospective, but rather a spirited look at a moment when New York had a new intellectual heft. Schifano was so enthralled by the saturated atmosphere that he managed to make paintings that belong all at once to the opposing camps of Minimalism and Pop. By his own admission, he was obsessed with the art of Jasper Johns, Robert Rauschenberg and Jim Dine, whom he knew casually, and who are represented here by intriguing, less familiar works.

From his American friends, Schifano adopted the then-radical idea that a painting is a physical object, as opposed to a window onto an imaginary world. He combined an American matter-of-factness with a suaveness that can put you in mind of Italian design and fast cars. Although he is often hailed as a pioneer of Italian Pop Art, the TV-shaped squares, stenciled numbers and advertising lettering inscribed in his work feel incidental compared to the material satisfactions of his high-gloss surfaces. He made his paintings by brushing household enamel paint onto plain brown wrapping paper, which was later mounted on canvas. The cheap paper allows the paint to sit on the surface and harden into a shell instead of sinking in.

“Standard” (1961), for instance, with its tall orange zero pressed against an all-black ground, feels as shiny and modish as a pair of new patent-leather shoes. Yet it’s not the work of a neat freak. The 20 or so paintings on view here are rescued from mere decoration by the artist’s willingness to let things slide, which results in stray pencil marks and dribbles of pigment running down the surface. 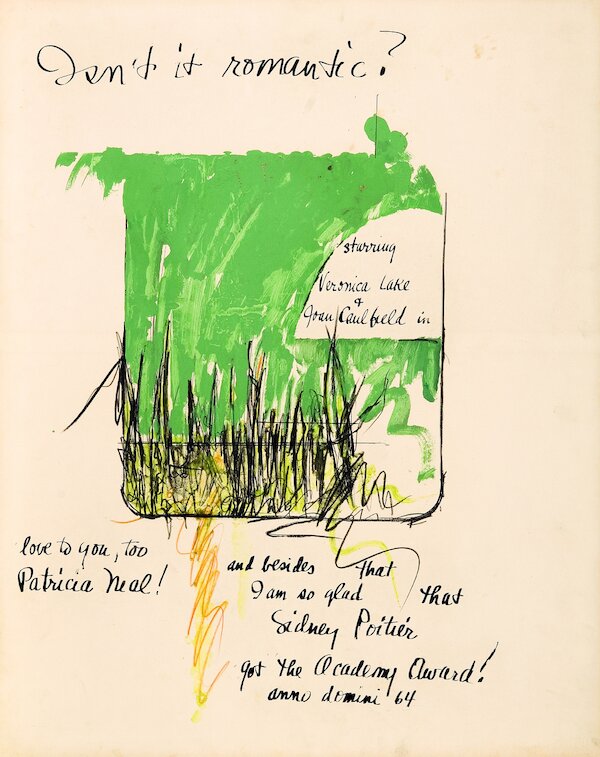 The exhibition also includes “Words & Drawings,” a choice relic of the downtown scene circa 1964. It consists of a portfolio of 17 sketches that Schifano undertook with poet Frank O’Hara, a generous champion of his artist friends. Conveniently, O’Hara happened to live a flight below Schifano at 791 Broadway in the Village, across from Grace Church. They created the drawings in a few days, taking turns jotting phrases and images that might or might not be thematically related. On one page, for instance, Schifano drew a sensitive, spiky rectangle washed in green, while O’Hara offered tributes to his favorite actors, such as “I am so glad that Sidney Poitier got the Academy Award!” Note his exclamation point. The tone here is playful, and the finished portfolio occupies a realm somewhere between dreamy improvisation and the casual goofing of two friends passing notes in study hall.

“Words & Drawings,” which was not published in its entirety until it appeared in a small-edition book of that title in 2017, does not represent the best example of either artist’s work. But it is larger than its parts. It stands as a sweetly reverberant souvenir, as does the show itself, a reminder of an era when a sense of community allowed artists to believe that they all had a part in the drama of art.