LOS ANGELES — Marina Diamandis moved from London to Los Angeles during the pandemic fall, but she has already discovered some of the city’s trendiest literary emissaries. “Eve Babitz didn’t get her due,” she said recently, scanning the shelves at West Hollywood’s Book Soup for the author’s “Slow Days, Fast Company,” a cult favorite of California-set vignettes. “Joan Didion kind of eclipsed her.” With a wry smirk, she added, “There’s only ever room for one woman.”

The 35-year-old singer known as Marina (formerly Marina & the Diamonds) is fed up with this myth of scarcity on her fifth album, “Ancient Dreams in a Modern Land,” due on June 11. “I don’t want to live in a man’s world anymore,” she proclaims in her sterling soprano on its first single, “Man’s World.” The accompanying video, directed by Alexandra Gavillet, features women of various ages, sizes and ethnicities standing like placid warriors in Technicolor tunics.

The music business is its own kind of man’s world, and Diamandis has been navigating its waters since her 2010 debut, “The Family Jewels,” a boisterous collection of piano ballads, synth-pop and theatrical hip checks. “Along with British songwriters like Lily Allen and Kate Nash, she’s redefining songs about coming of age, and the aftermath, with bluntness and crafty intelligence,” The New York Times’s chief pop critic, Jon Pareles, wrote just ahead of its release.

Three more albums followed between 2012 and 2019 that saw Diamandis wrestling with embracing and rejecting the mandates of the industry — striving for mainstream acceptance then pulling back, making music with the flavor of an indie artist in a major label ecosystem. The ambitious “Ancient Dreams in a Modern Land” is another kind of calibration. “The way that we treat people is linked to our connection to the planet,” she said while discussing its second single, the propulsive “Purge the Poison.” (It also has a remix featuring Pussy Riot.) “It’s all tied to a degrading of femininity. Across this album, there’s such a yearning for a focus on the feminine.”

In 2019, Diamandis put out a call on social media looking for female collaborators. Sifting through recommendations from fans and friends, she formed a team that included Gavillet, the photographer Coughs and the producer Jennifer Decilveo, who has worked with Beth Ditto and Bat for Lashes. Decilveo and Diamandis, who teamed on those first two singles, wrote music together at Diamandis’s West Hollywood home over Sunbasket meal-kit dishes that she had prepared.

“This is going to sound taboo, but I was drawn to the fact that Marina’s a woman, and I’m one of the only female producers in the business, and we spoke each other’s language,” Decilveo said in a phone interview. “She’s the real deal and, in this strange pop market, it’s refreshing to have somebody with lyrics that are going against the grain.”

With a singsong rhythm punctuated by snare drums, Diamandis impersonates Mother Nature avenging human failures on “Purge the Poison,” including capitalism, racism, pollution, Harvey Weinstein and the treatment of her beloved Britney Spears. “On ‘Purge,’ I wasn’t trying to be nice,” Decilveo added. “I knew it needed to be a sock in the face.”

The second half of “Ancient Dreams” is more inward-focused — a breakup album —  including “Highly Emotional People,” a delicate ballad interrogating male stoicism, and the plangent closer, “Goodbye.” During the pandemic, Diamandis split from her longtime boyfriend, Jack Patterson of the British electro-pop band Clean Bandit, with whom she shared a house and several cats.

“On ‘Goodbye’ I was crying so hard as I was writing it that I actually couldn’t record the demo properly,” she said during a stroll near her home. Her candy-striped sundress accommodated the stifling April weather, and she covered her inky black hair with a straw hat. “Songwriting is the best cure,” she added.

Growing up in a small town in Wales, Diamandis said she never demonstrated any aptitude for music, except for singing Oasis’s “Wonderwall” once when she was 9 “by the fireplace like a little Victorian child.” As a teenager, she moved to her father’s native Greece and recalled returning with “a burning, raging urge to be a singer.” She began writing and releasing music on Myspace.

Over the years, Diamandis’s albums have revealed an intriguing if uneasy dialogue with her own pop persona, beginning with “The Family Jewels,” which showcased her impressive vocal range and heralded a confident, unpredictable new artist.

“She was ahead of the curve,” said Derek Davies, her longtime friend and A&R representative, and a co-founder of Neon Gold Records, which released her first singles in the United States. “At the time, it was all about huge melodies and Max Martin. Marina was writing these deeply personal lyrics, which probably impeded her commercial radio viability.” 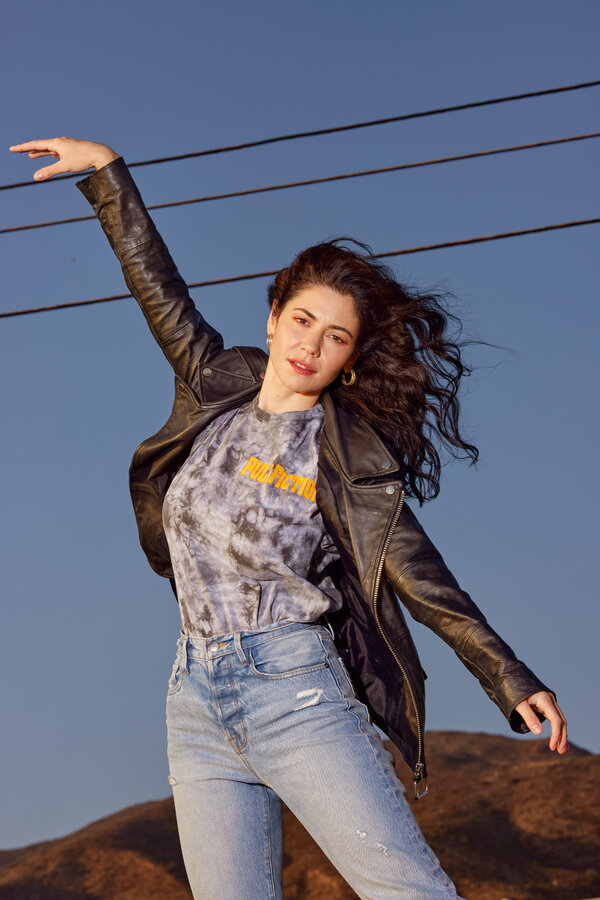 For her 2012 follow-up, “Electra Heart,” Diamandis said she felt pressured by her major label to work with au courant hitmakers like Diplo and Stargate. The experiment yielded the gold-certified single “Primadonna,” written with a team including Dr. Luke, which bore the influence of Diamandis’s tour dates opening for Katy Perry, but flattened her idiosyncratic style.

“Post ‘Electra Heart,’ I felt kind of ashamed, like this isn’t really who I am,” Diamandis said. She pulled out her phone and unearthed a nasty review of that album that left a mark. But the intervening years have changed her mind: “Now I think it was a really cool, dark, subversive pop record that was using the American system to elevate myself as an artist. I wouldn’t do it again, but it kind of changed my life.”

Diamandis wrested back songwriting control for her 2015 album, “Froot,” which became her highest-charting album LP in the United States. “‘Froot’ mellowed that quite aggressive need for validation,” she said, but it raised a fresh concern: “Did that mean that I don’t have any ambition and I shouldn’t be an artist?” Diamandis was living in London with Patterson, but felt she had been more warmly embraced in America. She went on hiatus, pursuing everything from psychology to falconry. “That was probably the worst period of my adult life,” she said.

Four years later, Diamandis dropped the Diamonds from her moniker, and returned with “Love + Fear.” She once again relied on cowriters, including OzGo (Pink) and Joel Little (Lorde, Taylor Swift), and as a result achieved “a more commercial sound,” she said. It armed her with both the confidence to finally leave her British management and switch to Atlantic’s U.S. division, and to revert to writing solo on “Ancient Dreams,” which she considers her best album.

“It’s the closest cousin in the discography to that first record,” Davies said. “It’s her most indie, alternative record yet.”

It’s also her strongest political statement, and for that she partly credits this strange and terrifying past year. “I would hope people don’t hear it as preaching,” she said. “The pandemic allowed a lot of us to step back and look at what kind of lives we’re living, and nothing feels sustainable.”

Diamandis already noticed pushback online to some of her positions on current issues. “I like seeing comments like, ‘She used capitalism to get where she is,’ because it does make me think about my own place,” she continued. “But we’re all allowed to challenge the system that we’re in.”