Donald Trump’s esteemed private club — and current residence — Mar-a-Lago partially closed on Friday after multiple staff members tested positive for COVID-19. The Associated Press confirmed the news through multiple sources, with one unnamed insider who is “familiar with club operations” sharing that the Palm Beach club has quarantined some of its workers “out of an abundance of caution.” 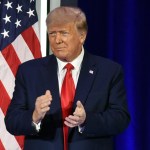 The outlet also cited an email that had been sent by Mar-a-Lago to its members. It read that service had been suspended for the time being in the club’s dining room and at its beach club as a result of the positive coronavirus tests from staff members.

CNN’s Jake Tapper shared a screenshot of the email on Twitter. The email began: “The health and safety of our members and staff is our highest priority.” Despite the club writing that they had taken “all appropriate response measures in accordance with CDC guidance,” such as “thorough sanitization and cleaning of any affected areas and all club facilities” the email also ironically shares that banquet and event services will remain open.

In a statement to the Washington Post, a spokeswoman for the Trump Organization said, “Out of an abundance of caution we have quarantined some of the workers and partially closed a section of the club for a short period of time.”

During Trump’s time at the White House, many political officials tested positive after attending “superspreader” events and that history may be repeating itself now at Mar-a-Lago. The club certainly doesn’t have a reputation for turning down large gatherings. In fact, since January, multiple events and fundraisers have taken place — including the Trumps’ huge New Year’s Eve party and an event that was hosted by Donald Trump Jr. and Kimberly Guilfoyle this month. AP noted that Trump even unexpectedly dropped by an event at the club last week.

The Trump family’s residence at Mar-a-Lago has been met with much dismay by their Palm Beach neighbors, and we’d imagine that the influx of COVID-19 cases may only anger them further.

Click here to see Melania’s quotes about Donald Trump, from their marriage to the presidential race.