Lorne Michaels doesn’t usually spend six months away from his office, but this year he had no choice.

Amid the coronavirus pandemic, he and his colleagues at “Saturday Night Live” had to leave behind the show’s home at Studio 8H in NBC’s Rockefeller Plaza headquarters in March, and its live broadcasts came to an abrupt halt. Though “S.N.L.” was able to close out its previous season with three remotely produced episodes, the show only recently announced that its live episodes would resume when its new season begins on Oct. 3.

Michaels, the creator and longtime executive producer of “S.N.L.”, went back to work shortly after Labor Day and has been making preparations for what will likely be one of the most challenging years in the show’s history. As the presidential election approaches, he has tapped Jim Carrey to play former Vice President Joseph R. Biden Jr., the Democratic nominee. And on Thursday, NBC planned to announce that the Oct. 3 season premiere will be hosted by Chris Rock, the comedian, actor and “S.N.L.” alumnus, and will feature musical performances by Megan Thee Stallion.

There are, of course, countless other considerations that Michaels and his colleagues are currently reckoning with as they prepare to bring the show back. They are acclimating to new realities of frequent testing and potential risk, and, as Michaels explained in a phone interview on Wednesday afternoon, the success of their efforts is in no way assured.

Michaels spoke further about how “S.N.L.” was getting ready for its first live episodes since the spring and the measures the show was taking to continue during the pandemic. These are edited excerpts from that conversation. 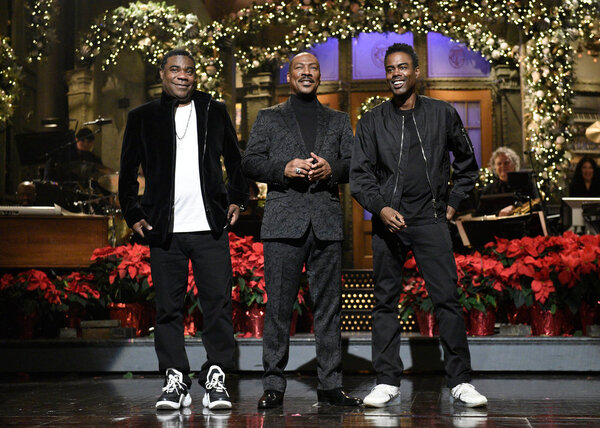 What is it like to be back in your offices after all these months?

Things have changed. There’s heat sensors at the revolving doors and then you go for your rapid [Covid] test. You wait 15 minutes and then you’re in the building. The Monday night meetings in my office on the 17th floor, which once had 40 people, now has a capacity of three. It’s me plus two. In the same way that we tried to figure out the at-home shows, we’ve had to rethink every part of the show.

Did you contemplate the possibility of starting the new season with more remotely produced episodes, rather than resuming with live broadcasts?

No, we just had to go back. It’s an election year. It’s what we do. There are four [presidential and vice-presidential] debates in the month of October, and I was trying to figure out how to take a week off, but it didn’t work out. So we’ll do five shows in a row, which we’ve never done, and under these circumstances. Everybody has just thrown themselves into it. It’s difficult, but we’ve done difficult a lot of times. Comedy, when there’s a little danger involved, it doesn’t necessarily suffer.

Obviously, I take my responsibility for people’s health and lives very seriously. But we did a show with anthrax in the building. We did a show after 9/11. That’s what we’ve always done. To our audience, it’s really important we show up.

What has been different about the day-to-day process of making the show so far?

Will cast members have to wear masks in the sketches?

They will wear masks until the moment the red light goes on, at which point the Velcro back will be taken off.

Are there limitations as to how many people can be in a sketch?

No, but there are restrictions on how many people you can have on the studio floor. So, if a camera’s not in use in that sketch, the operator would leave. When sets have to be changed and the stagehands come in to do it, others will leave. We have a finite number of people and that’s being closely monitored.

What happens if someone at the show tests positive?

Everyone goes into quarantine for two weeks if you test positive.

So right now, everyone at the show — performers, writers, behind-the-scenes staff — is getting the rapid Covid test?

Will you be able to draw your studio audience from the general public, or is that going to be restricted to NBC colleagues and family members?

That’s all still being sorted out.

The show’s first cold-open sketch after the 9/11 terrorist attacks is, I imagine, a benchmark for how you’d like to begin this season. You’d like to give viewers a sense of unity ——

And community. And that sanity is somehow in the air.

But how do you do that in the year 2020, when there are so few figures that a mass viewing audience will rally around?

Well, I think you do it —— [chuckles] We haven’t done it yet. So all we’re doing right now is getting ready to do it and trying to think through every possible thing that could go wrong. Trying to have enough original things that we can still put on a show that feels like us.

The death of Justice Ruth Bader Ginsburg was a profound loss for this country, and it was felt at the show, too, where Kate McKinnon’s portrayal of her had become an “S.N.L.” staple. Does that mean the end of that character as well — have we seen Kate play her for the last time?

You announced last week that Jim Carrey would play Joe Biden this season. Why did you choose him for the role?

First of all, Jim is brilliant, and he cares deeply about the country and what’s going on. He wants to have a voice in this. Every time he’s done [“S.N.L.”], he’s always come through brilliantly, and I think what he will bring to this part will be stunning and possibly transcend comedy. Because we’re in a period where comedy is only part of it.

Are you turning your back on other performers, like Jason Sudeikis, who have previously played that part?

I’m not turning my back on anyone. We’re just trying to put on the show that looks right, right now. People show up for each other in these moments. We were in the middle of shooting “30 Rock,” and Tina [Fey] was doing the episode that Oprah Winfrey could only do on the Saturday of that show [when Fey played Sarah Palin, the 2008 Republican vice-presidential nominee, for the first time]. But I didn’t choose her as much as the audience chose her. If you’re so hidebound by rules or expectations that you can’t reinvent a show, then why am I there?

Chris Rock, who is hosting the season premiere, was satirized in a 20-year-old “S.N.L.” sketch in which Jimmy Fallon impersonated him while wearing blackface. The sketch resurfaced online this past spring and Fallon was widely criticized for it. How did it come about in the first place?

Chris has talked about it and so has Jimmy. I wish I remembered better. I’ve seen the photo, but it was 20 years ago, so Jimmy was in his 20s. He’d done Chris Rock in his audition, as he had done Adam Sandler, both of which were stunning. I think someone gave him bad advice. He was trying to do an impression, and there’s nothing mean in what Jimmy does. It was of the time. I know we’re in a granular period now where every decision you’ve made in your life is up for reassessment. But there was no malice in it, I can tell you that.

If you go back over the history of the show, you’re going to find lots of examples of things — I don’t think Gilda Radner could do Roseanne Roseannadanna and John [Belushi] could definitely not do the Samurai. Garrett Morris could not do News for the Hard of Hearing. I could go on and on. Steve [Martin] and Danny [Aykroyd] could not be Czech brothers because they’re not Czech. That criteria is not the greatest soil for comedy to thrive on. I’m not saying comedy should be the dominant thing in our lives. I’m just saying it’s important it exists because, in addition to everything, it’s a safety valve.

Is this an opportunity for Chris to address this himself on the show?

Oh, I’m sure he will have lots to say.

Hal Willner, who was the show’s musical coordinator, died in April from complications related to the coronavirus. You know very well how dangerous this pandemic is. Are you concerned for your own health and safety as the show resumes?

Yes, is the answer. And I’m not alone. And we don’t know that we’re going to be able to pull it off. We’re going to be as surprised as everyone else when it actually goes on. We just have to stay clean and focused until Oct. 3. And then we do five shows in a row.

Fortunately, October has a blue moon, and that tends to be lucky. We’ll come on with the full moon and we’ll leave with the blue moon. And then, if the election goes into extra innings, then we’ll keep staying on the air. Whatever’s left of us.