This interview includes spoilers for the first two seasons of “Legion.”

Noah Hawley, the creator of the neo-noir anthology crime series “Fargo” and the bold Marvel adaptation “Legion,” doesn’t think in terms of heroes and villains. Most of his protagonists are both.

“Villains often think they’re the heroes of their own stories,” he said in a recent phone conversation. “Their need for power often comes from their having been hurt, which, to them, justifies their actions.”

“There’s always a moment on the show where the worst person says ‘I’m the victim here,’” he added.

A variation on that moment happened last year in the Season 2 finale of “Legion”: The emotionally unstable mutant David Haller (Dan Stevens) raped his girlfriend Syd (Rachel Keller) after he used his reality-warping superpowers to erase her short-term memory. When Syd confronts him, David defends himself by insisting that “I’m a good person; I deserve love.”

David’s shocking heel turn is especially disturbing because he is a Marvel superhero — in addition to being the biological son of the X-Men founder Charles Xavier, David fights misanthropic villains in comic books like The New Mutants and X-Factor.

Hawley continues exploring David’s dark path from victim to bully in the third season of “Legion,” premiering Monday on FX. The new season is also the final one, wrapping up a series that, with its expressive musical numbers, intricate flashbacks and other unconventional narrative and aesthetic elements, has been one of the most stylistically bold and psychologically complex superhero screen adaptations.

The Times spoke with Hawley about how he turned an iconic hero’s son into a vicious antihero. These are edited excerpts from that conversation.

David’s rape of Syd completely shifts our understanding of his character and the direction of the story. Did you plot out the “Legion” narrative one season at a time, like with “Fargo”?

I need to know how the story ends so that I know what it means. From the very beginning, I had an arc in mind that answered the question: Does David have a mental illness or does he have superpowers? By the end of Season 2, we realize that it’s not either/or: He’s unstable and has powers. David sees himself as a victim, and that warps his understanding of responsibility and what he needs to do to be a good person.

Were there any themes or plot points that you had trouble clearing with Marvel?

No. I never got a note from Marvel saying “We don’t think you should do this,” or “We’re worried about the brand.” I came in from left field through FX. And because of Marvel’s deal with Fox, Marvel didn’t have a lot of control over whether we could do the show at FX or not. I thought that they might want more control, content-wise, since “Legion” didn’t really fit into their larger brand’s message. But that’s not what happened at all. 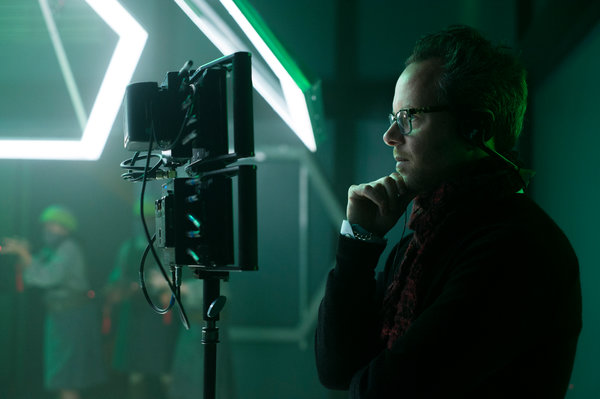 Did you have any discussions with Marvel about including Charles Xavier? He’s featured prominently in flashbacks in Season 3.

The things I wanted to do with him didn’t offend them. But it’s been a dance over the last couple of years about using him, first with 20th Century Fox, the studio that made the X-Men movies. 20th Century Fox was initially very protective of the X-Men and didn’t want Xavier to be overexposed. During our first year, Fox said we could show his wheelchair, but we couldn’t show his bald head.

But at the end of the day, “Legion” is a story about David, a character who was abandoned by his biological parents. So there was no way we weren’t going to include Xavier. Eventually, Fox relented and let us put him in our story.

You’ve said before that you sometimes get notes from studio executives to “clarify” certain story elements. What, generally speaking, needed to be clarified?

I do think that there is an impulse, in reading any show’s scripts, to try to logically understand the story in a linear way. But while “Legion”’s story is not meant to be confusing, it is designed to be told from its characters’ points of view. So if David is confused, then you’re going to be confused. And when he gets clarity, you’ll get clarity.

I did have a conversation with FX at one point, because the script for a show like “Legion” can only tell you so much. I asked them: “When you have a script for “Atlanta,” can you tell from that script exactly what the episode is going to be like?” They can’t, because so much of that show is about the space between the script’s lines.

With that said, I’ve never had trust issues with FX. If they’re confused by something, they will ask. And at the end of the day, I got to make “Legion” the way that I wanted to make it.

[Read more about the shows to watch this summer.]

The musical numbers, like the duet version of “Behind Blue Eyes” in the Season 2 finale, emphasize the subjective nature of the story. Is that the main reason you use them?

A song, in a classical musical, allows characters to speak their inner truth in a way that’s not just expository, but also feels like a genuine expression of their selves. You can do so much more with a dance than with a fight. A fight is binary: Either you win, or I win. But a dance is not just a battle — it’s also about peacocking and seduction. So in these musical numbers, we’re trying to get deeper inside the characters not as a gimmick, but as a shortcut to something unexpected and with greater impact than, say, an emotional speech about redemption.

A lot of the show’s male characters either want to take charge or refashion the world in their image. Is it fair to say that “Legion” is about the perpetuation of male-dominated narratives?

The show is certainly an exploration of masculinity and ideas of who the “hero” is. The hero is often a man in literature and films. These stories are also often told from a very male point-of-view; they’re often about how might makes right and how war is the only way to solve a conflict. I have a six-year-old son and an 11-year-old daughter and everything is conflict-oriented with him. Everything is like, “This could be turned into a gun.” We certainly don’t raise him that way, but he has this testosterone energy that, if left unchecked, is not healthy. So I do think David has a sense of entitlement in terms of what he thinks the world owes him. If he were a woman, he might not have those expectations.

What would you say to a viewer who, after seeing what’s happened to Syd and the way David treated her, wants to know why the show is still primarily about him and not her?

I don’t see “Legion" as being entirely David’s show. In this last season, I think we pivoted away from a more traditional male narrative, after David did something that we can’t morally tolerate. We opened “Legion”’s story up to strong women played by Lauren Tsai, Rachel Keller, Aubrey Plaza and Amber Midthunder.

Also: While the superhero genre isn’t entirely a “male” genre, it is still consumed by a lot of boys between the ages of 13 and 18. And if we don’t have these stories about power — and the way that men use power to, on a human level, do evil to women — I think we’re doing those readers a disservice. I do think “Legion” shifted its focus — I hope successfully — so that it changes who we think of as the show’s protagonists.