Kenneth Cooper, a harpsichordist, pianist and musicologist, acclaimed for performances of Baroque music that balanced historical insights with engaging spontaneity, whose nearly 100 recordings also included forays into contemporary works and ragtime and whose collaborators included Yo-Yo Ma, died on March 13 in Manhattan. He was 79.

His death, in a hospital, was confirmed by his family, who said he had suffered a stroke a few days earlier at his Manhattan apartment.

Mr. Cooper had a flair for improvisation and ornamentation based on his scholarly studies of early music practices. “Oh, I enjoy improvising a lot,” he said in a 1977 interview with The New York Times. “I always enjoy making trouble.”

He added: “I know there are harpsichordists who are more well behaved than I am. But I’m not trying to be outrageous. I’m trying to give the music the same vividness and impulse that I think Bach or Handel might have given it.”

That interview appeared the day before Mr. Cooper presented a recital at Alice Tully Hall, a typically adventurous program that included compositions by Bartok and Ligeti and showcased a recent discovery: works from a frayed early-18th-century volume Mr. Cooper had chanced upon while rummaging through a junk shop in Oxford, England, that contained harpsichord transcriptions of orchestra overtures to 65 of Handel’s operas and oratorios.

Some harpsichordists might have dismissed these works as not “authentic” Handel, Mr. Cooper said, though he surmised that the arrangements could have been prepared by Handel’s students. But Mr. Cooper embraced them for their vitality and grandeur, as well as the opportunity the scores offered for creativity. Though Handel’s melodies, bass lines and rhythms were intact, inner voices were omitted; performers were clearly expected to fill in these parts extemporaneously.

In a review of Mr. Cooper’s recording of those Handel transcriptions in 1978, the Washington Post critic Joseph McLellan praised the album for presenting familiar music “in a striking new perspective.”

Mr. Cooper’s adventurousness went hand in hand with scrupulous musicianship and articulate technique. He was a sensitive partner in chamber works, as in his recording with Mr. Ma of Bach’s sonatas for viola da gamba (played on the cello) and harpsichord.

In 1993, Mr. Cooper’s interest in Baroque works for larger forces led him to found the Berkshire Bach Ensemble, an extension of the Berkshire Bach Society in Great Barrington, Mass., then in its third year. The ensemble, which he directed for 23 years, presented chamber and orchestra programs in various locations. The concerts included an annual New Year’s Eve program, often featuring Bach’s six Brandenburg Concertos.

This offering grew so popular that in time it spread over several days at several sites, most notably the Mahaiwe Performing Arts Center in Great Barrington. A Berkshire Eagle article in conjunction with Mr. Cooper’s final New Year’s program, in 2016, estimated that he had presided over some 200 Brandenburg Concerto performances for the society.

“I’ve enjoyed every single one of them,” the article quoted Mr. Cooper as saying. “I’ve had the most amazing group of players.”

Kenneth Cooper was born in New York City on May 31, 1941, and grew up in the Washington Heights neighborhood of Manhattan. His father, Rudolf, a British immigrant, taught English at the High School of Music and Art (now the Fiorello H. LaGuardia High School of Music & Art and Performing Arts). His mother, Florence (Buxbaum) Cooper, after raising Mr. Cooper and his sister, Constance, worked at the Museum of Modern Art and became active in the League of Women Voters. Both parents were painters and art collectors.

Mr. Cooper began studying piano at a young age. A brief residency at his high school by the harpsichordist Fernando Valenti fired his enthusiasm for that instrument, leading to his studies at the Mannes College of Music with the eminent harpsichordist Sylvia Marlowe. He then attended Columbia University, where he earned a bachelor’s degree, a master’s and, in 1971, a doctorate in musicology.

While leading a student ensemble at Columbia, Mr. Cooper auditioned a soprano from Barnard College for a staged production of Handel’s “Acis and Galatea.” That singer, Josephine Mongiardo, won the role of Galatea, and she and Mr. Cooper married in 1969.

The couple regularly performed together for decades, including at Carnegie Recital Hall in 1979 in a program of works by Bach and Handel, a rarity by the 19th-century composer Franz Lachner and a premiere by Seymour Barab, with Mr. Cooper playing harpsichord and piano.

A pivotal early solo recital for Mr. Cooper, at Alice Tully Hall in 1973, earned a glowing review in The New York Times from the critic Allen Hughes, who described the young artist as a “virtuoso of apparently unfaltering precision, rhythmic security and tone color sensitivity.” 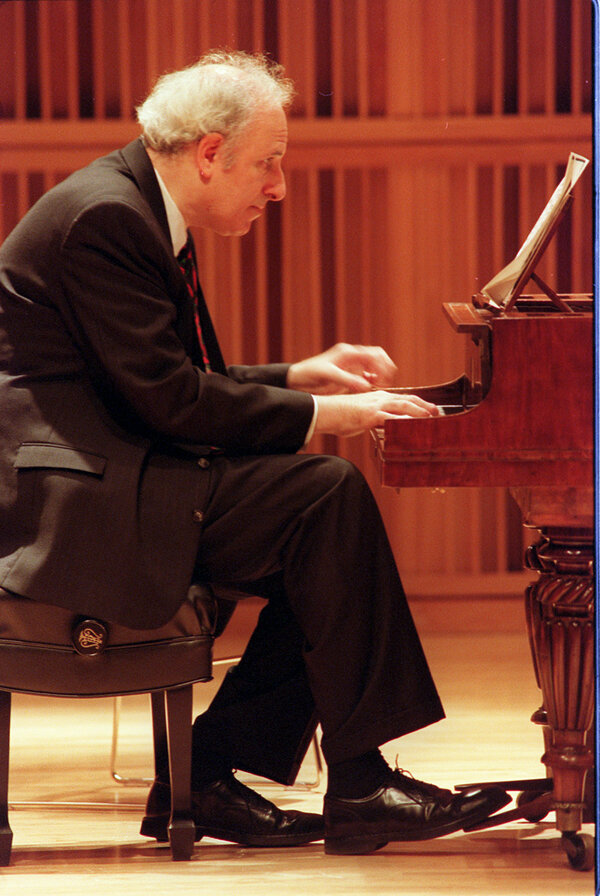 As his career thrived, Mr. Cooper performed regularly at festivals in Santa Fe, N.M.; Lucerne, Switzerland; and Salzburg, Austria. He also appeared with the Chamber Music Society of Lincoln Center. His recordings include well-received albums of Scarlatti sonatas and of Bach’s violin sonatas, with Mr. Cooper accompanying the violinist Ani Kavafian on fortepiano, as well as “Silks and Rags,” featuring his versions of ragtime pieces and other American fare. He taught at Barnard, Columbia, Mannes and elsewhere.

In an appearance on the radio program “WNCN Live” in the early 1980s, Mr. Cooper explained what it was like to lose himself in performance.

He was about to play Bach’s dark, teeming and intense Chromatic Fantasia and Fugue. Every time he played it, “something new comes out of it,” he said. “It’s almost now an adventure to see what new is waiting.” However, he added, he had to be careful. “If it’s too different, I can get very distracted and forget what I’m doing.”