John Sacret Young, a writer and producer who was behind the television series “China Beach,” set at a Vietnam War military hospital, and whose work often explored the psychological wounds of war, died on June 3 at his home in Brentwood, Calif. He was 75.

The cause was brain cancer, his wife, Claudia Sloan, said.

Mr. Young was the executive producer of “China Beach,” which recounted the experiences of several women at an evacuation hospital on ABC from 1988 to 1991. He created the show with William Broyles Jr., a former editor at Newsweek who had served in Vietnam and went on to write the screenplay for Ron Howard’s “Apollo 13” (1995).

Mr. Young was later a writer and producer of the Aaron Sorkin’s series “The West Wing” (1999-2006) and co-executive producer and writer of the Netflix series “Firefly Lane,” which was released in February.

“China Beach” drew comparisons to “M*A*S*H,” particularly when it came to their settings: one in a military hospital in Korea, the other in Vietnam. But where “M*A*S*H” was part comedy, part drama in mostly half-hour installments, “China Beach” took a fully dramatic approach in hourlong episodes. It drew praise for its well-drawn characters, particularly that of Colleen McMurphy, an Army nurse played by Dana Delany.

With a cast (many headed for stardom) that also included Tom Sizemore, Kathy Bates, Helen Hunt, Don Cheadle and Marg Helgenberger, “China Beach” won the 1990 Golden Globe Award for best drama, beating out contenders like “L.A. Law” and “Murder, She Wrote.” It also launched the careers of Ms. Delany and Ms. Helgenberger, who went on to a leading role in “CSI: Crime Scene Investigation.”

Though the show was not a major ratings hit, “China Beach” earned praise for its writing and period-appropriate score, featuring a theme song by Diana Ross and the Supremes.

In an interview with The Los Angeles Times in 2013, on the occasion of the show’s 25th anniversary, Mr. Young called the Vietnam War “a story of our generation” and said that choosing to focus on women felt “crucial, interesting and relevant.”

The New York Times television critic John J. O’Connor wrote in 1991 that “the series sensitively tapped into national terrain that remains difficult.” The year before, he lauded the show for avoiding the clichés of prime time television in favor of something “inventive, imaginative, adventurous.”

Much of Mr. Young’s work — in books, television and movies — explore the impact of war. In addition to “China Beach,” he wrote the mini-series “A Rumor of War” (1980), which adapted Philip Caputo’s celebrated memoir of his time in the Marines Corps in Vietnam and the emotional devastation that followed; “Thanks of a Grateful Nation” (1998), a television movie set in the aftermath of the Gulf War; and the theatrical release “Romero” (1989), starring Raul Julia, which addressed the civil and religious upheaval leading to the assassination of Archbishop Óscar Romero in El Salvador.

Vietnam was also a prevailing theme in a memoir by Mr. Young, “Remains: Non-Viewable” (2005), which centered on the death of his cousin Doug Young in combat in Vietnam and its emotional fallout.

The memoir focused on a culture of New England stoicism that, he wrote, prevented his family from processing their loss.

“There was a shoe to drop,” Mr. Young wrote in the book, “the actuality, the coming of the coffin, and that would happen soon enough; but in the waiting there was a free fall of silence, an odd decorum, and the postponement of a free fall of emotion that could not be measured.”

Mr. Young told NPR in 2005 that though his family had actually been able to view his cousin’s remains, the title, read another way, suggested how they had “looked at that war after it was over and said, ‘Remains non-viewable.’” 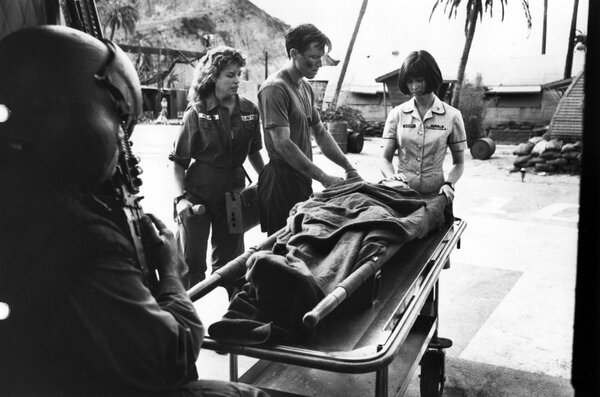 John Sacret Young was born on May 24, 1946, in Montclair, N.J., to Bill and Peggy (Klotz) Young. His mother was a homemaker, and his father worked for the Public Service Electric and Gas Company in Newark. John was the youngest of four siblings.

He attended College High School in Montclair and earned a bachelor’s degree in religion at Princeton, graduating in 1969. Ms. Sloan said he chose to study religion primarily because the program allowed him to write a novel as his senior thesis.

He married Jeannette Penick in 1973. After their divorce, he married Ms. Sloan in 2010. Along with his wife, Mr. Young is survived by two sons, John and Riley; two daughters, Jeannette and Julia; a brother, Mason; and three grandchildren.

His first big break came with “Police Story” (1973-1987), a crime drama for which he began as a researcher and eventually wrote three episodes. To add verisimilitude to his scripts, Mr. Young embedded himself in the Los Angeles Police Department, Ms. Sloan said.

Among his other credits was the movie “Testament” (1983), starring Jane Alexander, about a suburban family’s struggles after a nuclear attack.

An avid art collector, he also wrote “Pieces of Glass: An Artoire” (2016). The book functions as a memoir, his life as seen through the lens of art as he considers how artists, from Vermeer to Rothko, had affected him.

Mr. Young opened “Remains: Non-Viewable” with a reflection on storytelling, the art form that defined much of his life and career.

“Call up a story: a writer makes them up and sets them down,” he wrote, “but it is what we all do to make shape of our days.”