Twitter is declaring that Christmas is officially back at the White House now that a very traditional 18-foot Fraser fir tree arrived on Monday. Even though the Trump administration also had a tree similar to the Bidens — no one remembers that — they are only recalling the interior decorations, which weren’t everyone’s holiday style.

Former First Lady Melania Trump’s preference for a monochromatic look — all white, spindly trees one year, and red the next Christmas — became memes all over the internet. Instead of the decorations feeling warm and inviting, they felt cold and stark. And the holidays were reportedly not her favorite time of the year, according to the leaked audio released by her former BFF Stephanie Winston Wolkoff. “I’m working… my ass off on the Christmas stuff, that you know, who gives a f**k about the Christmas stuff and decorations?” she vented. “But I need to do it, right? Give me a f**king break!”

It’s hard when the First Lady role is unpaid (but requires a lot of work and tradition), so it was undoubtedly exhausting for Melania, who wasn’t invested in her position, to begin with. While Dr. Jill Biden is only at the preliminary stages of the holiday festivities, many social media users are expecting things to return to “normal.” One user tweeted to Jill, “I am so looking forward to some normal Christmas decorations at the White House this year, instead of the twisted nightmare of the last four years.” Another account chimed in, “Biden officially ends the War on Christmas!” 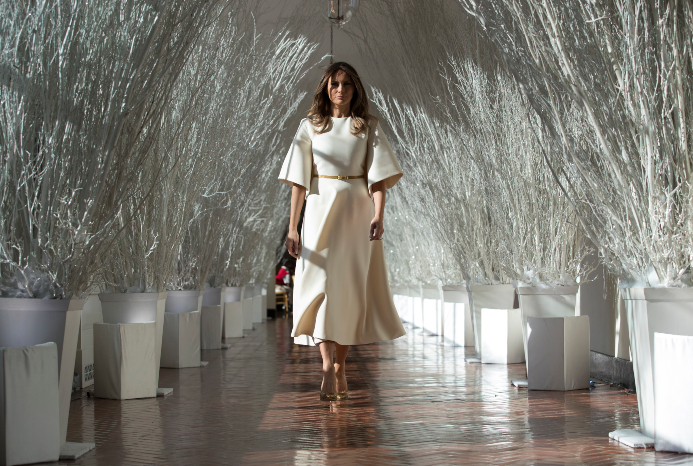 No matter what the final outcome, it’s a reminder that everyone has personal tastes when it comes to the holiday season. Some may prefer a modern interpretation while others are looking for a good old-fashioned Christmas.

Before you go, click here to see our favorite photos of President Joe Biden’s big family.