Hosted by Saskia Dijkstra, the founder of the knitwear brand Extreme Cashmere, the dinner was an office holiday party with a twist. 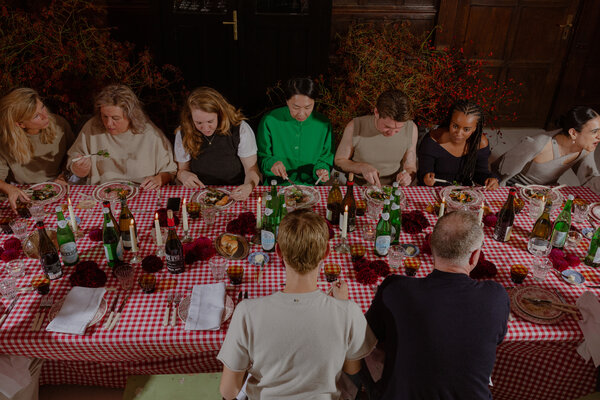 At 1 o’clock every weekday, a cowbell rings inside the Extreme Cashmere headquarters in Amsterdam, calling the company’s 20 employees to lunch. A communal meal has been a ritual for Saskia Dijkstra since she founded the knitwear brand in 2016, after 20 years spent sourcing cashmere for luxury labels including Jil Sander and Joseph. Even when the team numbered just four, as it did for the first three years, Dijkstra would pause work at midday to go grocery shopping, set the table and cook a simple but hearty meal. “A good sweater makes you feel good, but good food also makes you feel much better,” she says.

Meals have, by necessity, evolved since the company expanded and moved into its new headquarters in December 2021. Extreme Cashmere now occupies the first floor and basement of a 17th-century canal-side mansion in the picturesque Grachtengordel neighborhood. The building previously housed a publishing company and a girls’ school. Now, one first-floor room overlooking the rear garden has been converted into a stainless-steel kitchen, overseen by an in-house chef, while the adjoining parlor — a room with glossy crimson walls and a Delft-tile fireplace — serves as an eating area. The basement laundry facilities have also been devoted to a collective domestic endeavor: Employees wash their own cashmere garments here and lay them flat on towels to dry. Dijkstra feels particularly passionate about garment care. She recommends Miele washing machines to customers and includes extensive upkeep instructions with orders. Once, she met a customer on the street whose sweater, she felt, was not being properly maintained and she took it home to wash it herself.

For Dijkstra, good knitwear is worth the trouble. After two decades of “making sweaters with concessions,” as she puts it, she founded Extreme Cashmere in an attempt to offer uncompromising quality. “I wanted to make the best sweater in the world, and I just knew I had to buy the longest fiber length, knit it as tight as possible and not use any chemicals,” she says. She added a tiny amount of elastane, which gives the sweaters their supple bounce, and initially chose to keep the branding anonymous, only adding a label when a frustrated customer had trouble tracking her down to buy a second piece. “I was allergic to branding at the beginning because I had seen how the industry was not about product any more, it was about campaigns,” she explains.

She also dispenses with conventional corporate wisdom by offering unisex, one-size-fits-most garments — mostly sweaters, dresses and pants — and accessories. Dijkstra says that her pieces, which are made in Hong Kong from Mongolian cashmere, can be worn year-round (the label makes cashmere crop tops and hot pants for summer) and for all occasions (its website suggests cream cashmere gloves for nuptials). “The key is to make the arms long,” says Dijkstra of her one-size system. The best-selling Juna crew-neck sweater, for instance, is generous on her frame, pooling over her wrists, but a comfortable fit on the seven-foot-tall Minnesota Timberwolves basketball player Karl-Anthony Towns, who recently wore it in melon pink for a courtside appearance.

Reveling in her newly spacious headquarters, Dijkstra has moved beyond lunches to establish a tradition of festive dinners, with team members pitching in to cook and decorate. Earlier this month, she threw a jubileum (the Dutch word for the celebration of a special event) dinner to mark both the upcoming holiday and the five-year work anniversary of the label’s designer, Jules ten Velde. Among those invited were ten Velde’s parents, Bert and Sientje ten Velde; René Eijdenberg, a strategic adviser to Dijkstra since the company’s founding; and most of Extreme Cashmere’s employees.

As guests began to arrive at 6 p.m. that Friday, conversation centered on ten Velde’s namesake side project, a collection of white ruffled dresses that he’s preparing to show to the press. In the kitchen, the chef Camille Maria, who regularly cooks for Extreme Cashmere events, was joined by the brand’s head of communications, Wies Verhoofstad, a close friend who played sous-chef. The inspiration for the meal was a family-style Christmas dinner and the menu was vegetarian, with a few entirely plant-based dishes for the keto-vegan guest of honor. Shared dishes included whole roasted celeriac served with Café de Paris sauce (an herb-infused butter usually served with steak); cauliflower with beurre noisette; roasted pumpkin with radicchio and burrata; roasted new potatoes with chives; and brussels sprouts with lemon and caramelized shallots. For dessert, guests enjoyed meringue with fresh winter berries as well as slices of Roquefort.

While Dijkstra set the table, other staffers were on flower duty. “There’s no competition within the team, and I treasure that,” she says. “People are so respectful to each other — and we have a lot of fun.” Here, she shares her tips for hosting a similarly festive feast.

“We used to start with vodka, then at some point we decided to finish with vodka,” says Dijkstra, with a laugh, of the company’s team meals. She herself prefers red wine to sparkling, but to create a celebratory feel for this dinner, and at the behest of the team, she kicked off the evening with Crémant and Champagne (“never prosecco,” she says) when guests arrived, along with meaty green olives purchased from Casa del Gusto, a local Italian deli. Plates of crudités — radishes, carrots and fennel — were prepared by several team members and served with olive oil and butter, along with pane carasau, a Sardinian cracker. Later, guests moved on to Spanish Grenache red wine, which Dijkstra and her team discovered at Zoldering, a neighborhood bistro that has hosted several Extreme Cashmere celebrations. “I love wine but I know nothing about it,” says Dijkstra, who relies on the sommelier at Zoldering for advice.

To avoid crowding the tabletop and blocking conversation between guests, Dijkstra often dispenses with vessels when decorating with fresh flowers. Before the dinner, several team members drove to the nearby flower market to pick up seasonal berries and big bunches of dahlias, ten Velde’s favorite flowers. The blooms were snipped at the neck so that the deep pink and burgundy blossoms could be laid flat on the table, allowing guests to admire them up close. Meanwhile, tangled armfuls of ilex branches, complete with glossy red berries, were arranged loosely in simple metal buckets and placed around the dining room and marble-floored entrance hall in a nod to traditional holiday décor.

Pick up the Check

“We always have a gingham tablecloth. It’s like a bistro — traditional, simple, cozy,” says Dijkstra, who grew up in France and has a Gallic appreciation for cafe culture. The relaxed atmosphere was underscored by low wooden stools and mismatched plates, which Verhoofstad regularly buys in bulk from Golden Bend, the antiques shop across the street from the office that sells china from defunct American hotels. Rather than stemmed wine glasses, there were tumblers from Household Hardware, a Dutch home goods store. “Smaller glasses give a more homey feeling,” says Dijkstra, whose Spotify playlist completed the warm mood. “We start with Paolo Conte, then move on to Queen, Supertramp and Robyn, which is when we’re all dancing on the tables,” she says.

Produce for the meal was mainly sourced from the local greengrocer, Frank Vork’s, as well as the nearby Italian deli. “I was raised in France where food is a big part of the culture, so I hate supermarkets. I like to go to specialty stores,” says Dijkstra. An exception to the plant-based menu was made for a cheese course, which is a nonnegotiable team tradition. “There is always salty blue cheese with port, that’s a big thing for us,” says Dijkstra. Roquefort was procured from Fromagerie Abraham Kef, a cheese shop that is an institution in Amsterdam, and laid on platters with grapes and nutty crackers.