During Robbie Chater’s most recent stay in rehab, he was pretty sure the Avalanches — the beloved, sample-heavy Australian group he’d helped found in the late ’90s — had broken up.

After checking into a detox facility in January 2017, the multi-instrumentalist didn’t have any access to the outside world. As far as he knew, his latest bout of drinking had caused the Avalanches to cancel a tour promoting their long-gestating second album “Wildflower.” He felt awful about that, but if it meant the band was over that was also OK, because after two decades of struggling with addiction, he’d finally arrived at a place of acceptance.

“I’d been trying so hard to quit drinking on my own but I could not do it,” Chater said on a video call from his Melbourne home in early November. His space was sparse and minimalist; a while back he’d sold all but about 200 of his records in an attempt to break from his past. “You get so unwell that you eventually crack open and listen to a new idea or a new way of looking at life.”

In November 2000, the Avalanches released their magnificent debut album “Since I Left You,” a painstakingly detailed tapestry of thousands of obscure, interwoven samples culled, mostly, Chater said, from “junk-store records.” Somehow as breezy as it is busy, “Since I Left You” sounds a bit like a 1960s beach party painted by Hieronymus Bosch. It was a critical darling and even an out-of-left-field commercial success, with the oddball single “Frontier Psychiatrist” receiving airplay on MTV and American alternative-rock radio. Its reputation has only grown over time, and it’s now mentioned alongside records like the Beastie Boys’ “Paul’s Boutique” and DJ Shadow’s “Entroducing” as a landmark achievement of analog sampling.

“It was one of the first CDs I bought,” the producer Jamie xx said in a phone interview. “It led me to want to discover how people made music that sounded like that.”

But it was also a tough act to follow. The 16 years between “Since I Left You” and “Wildflower” were a dense maze of left turns, overthinking and abandoned songs. Another of the group’s founders, Darren Seltmann, left in 2006, making the Avalanches essentially a duo of Chater and his longtime friend and collaborator Tony Di Blasi. Progress was often stalled by Chater’s drinking.

“There were about five times where I legit thought, this is it, it’s over,” Di Blasi said in a separate video call, his cat, Jude, occasionally sauntering across the screen’s foreground. He saw the arrival of “Wildflower” as “a great achievement, regardless of how it was received or anything like that, just actually getting it done was the victory.”

Chater has now been sober for almost four years. And when he checked out of rehab, he had a few surprises waiting for him. No, the band hadn’t broken up. In fact — against the advice of their manager — the Avalanches had even played those tour dates, with a full backing band and Di Blasi as the only official member. (“Which was kind of weird,” Di Blasi recalled, “but in the end it was like, who cares?”) Would he be up for playing Coachella in the spring?

Both he and Di Blasi describe those months that followed as the happiest in the Avalanches’ sometimes-torturous two-decade existence. “We were touring and seeing the world, and we felt so full of light and positivity and joy for living,” Chater said.

Di Blasi said they were charmed by the sense of routine. “We were just like, isn’t it great to be in a normal band?” he said. “We’d been sitting at home by ourselves for 16 years in a room.”

After a comparatively brief four-year break, they’re doing it again, releasing their star-studded third album, “We Will Always Love You.” Making the new LP, due Dec. 11, was a more streamlined process because it began with a unifying, if characteristically grand, concept: light, the cosmos and the Golden Records, the two 12-inch phonograph disks that were launched into space aboard Voyager in 1977. The albums contained Bach and Beethoven, Aborigine songs and a Navajo chant, the sounds of trains and horses, and a host of greetings in different languages. Chater was particularly moved by the fact that Carl Sagan, who contributed to the project, included a recording of his wife Ann Druyan’s brain waves as she thought about what it was like to fall in love.

The core of the new songs are still unearthed samples, but now they intermingle with a motley squad of live voices: Johnny Marr, Rivers Cuomo, MGMT, Karen O, Kurt Vile, Perry Farrell, Leon Bridges — and even two of Chater and Di Blasi’s early heroes, the trip-hop legend Tricky and Mick Jones of the Clash and the pop-sampling pioneers Big Audio Dynamite. (Jamie xx also co-produced a track on his idols’ latest record: “I still can’t quite believe it,” he said.)

“Being a kid growing up in a country town in Australia and hearing that Big Audio Dynamite record, which was a pop hit here — I was like, ‘How did they make that?!’” Chater said. He’d been similarly drawn to David Byrne and Brian Eno’s patchwork “My Life in the Bush of Ghosts,” the collagelike production of early De La Soul and Public Enemy albums and even EMF’s ubiquitous 1990 smash “Unbelievable.” Beguiled by the dark art of sampling, a teenage Chater began experimenting with tape loops at home.

Chater grew up mostly in the seclusion of the Australian countryside, “loving music,” in his words, “but playing drums badly and piano badly.” He felt alienated by the machismo and virtuosity of Australian rock ’n’ roll culture: “I’m like, well I’m never in a million years going to be able to play a guitar as well as Angus Young, or whoever. I need to find my own little way of expressing myself that’s unique to me.” 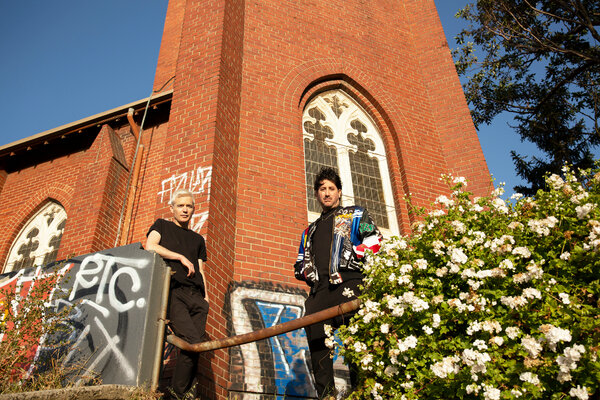 Di Blasi moved to town at the end of high school, and he and Chater instantly bonded over music, jamming in Chater’s back shed with friends. But Chater was already a heavy drinker throughout his teens and by 20 he’d become sick enough to land in a detox facility. Sobriety allowed him to focus more intently on music than ever before. Di Blasi brought Chater one of his samplers to occupy his time in rehab.

“I remember visiting him one day and he was like, ‘Oh, look at this,’ and he played me ‘Radio’ just on samples,” he said, referring to one of the layered songs that would end up on “Since I Left You.” “He was doing that in rehab! And he came out of it completely invigorated, from almost dying to just being life, absolute life.”

Chater agreed that a sense of rebirth animated that early work: “That’s why that record’s full of so much joy and light,” he said. “I was so happy to be alive and that record just came pouring out.”

A sense of interconnectedness flows through “We Will Always Love You,” and Chater said the process of working with live singers isn’t that different from selecting found sounds. “It’s almost like sampling,” he said, “in trying to find the right vocalist, to match the music with someone who seems like they’ve got a certain spirit.”

Sampling is still a big part of the Avalanches’ creative process, and the stirring warmth of their work has always fought the misconception that music made with electronics can’t be as personal or emotional as someone crooning into a microphone or strumming an acoustic guitar. “Someone may have sung on this song back in the 1940s,” Chater said, “and that record’s laid in someone’s house for 30 years and they’ve listened to it and added to the crackles on it, you know? It comes to me and I find it. Where do I fit into this whole flow of energy?

“It’s really humbling in a way,” he added. “Because then we’re putting this stuff out, and it floats back out there again.”