It isn’t unusual to see a violinist — rather than a maestro — leading a small orchestra in early music, or in works from the Baroque or Classical eras. It is extremely rare, however, to see one conducting bel canto operas, with their larger ensembles and layered rhythms, often delivered at a sprint.

But that is the practice of Teatro Nuovo, a fledgling company that presents bel canto works as they likely were at their premieres: with a violinist, the concertmaster, juggling the head-spinning tasks of keeping together an entire orchestra and cast of singers, while also playing as a member of the violin section — virtuosic solos included.

At Teatro Nuovo’s coming performances — of Bellini’s “La Straniera” (1829) and Rossini’s “La Gazza Ladra” (1817), presented this weekend at The Performing Arts Center at Purchase College in Westchester County, then at the Rose Theater in Manhattan next week — that courageous violinist will be Jakob Lehmann, a 27-year-old Berliner and bel canto wunderkind.

“Leading from the instrument always has its challenges, which means you never play as well as you could,” said Mr. Lehmann, who this season is also taking on the role of associate artistic director of Teatro Nuovo. “You have so many other things to do, and you have to use your body in a way that is not coherent with the way you would play if you did not have to.”

Will Crutchfield, who created Teatro Nuovo (last year was its inaugural season) out of his long-running series Bel Canto at Caramoor, which ended in 2017, acknowledged that the practice of leading operas from the violin can be immensely taxing.

“It takes the skill to play a technically demanding part and still have at least half your brain cells free for tracking everything else in the score,” he said. “It’s a different kind of cohesion. When you lead while playing, you’re leading, but you’re not controlling, not instructing. So no one person is defining the character of the opera.”

Mr. Crutchfield and Mr. Lehmann met through the violinist and conductor Riccardo Minasi, who, Mr. Crutchfield recalled, said that a player like Mr. Lehmann needs a “somewhat animal character” to galvanize the other players and singers.

In an interview, Mr. Lehmann discussed how exactly he pulls that off. Here are edited excerpts from the conversation. 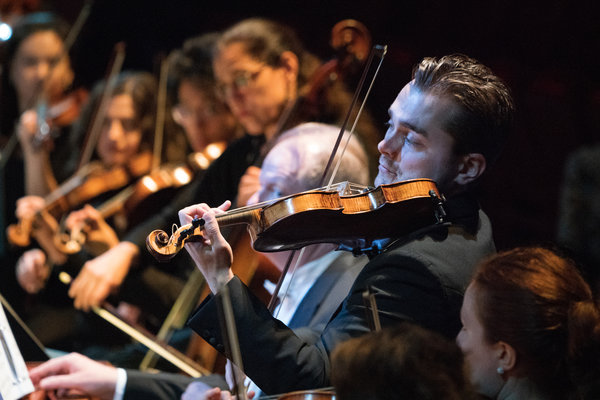 It is really challenging from a logistical level because you have to just track this apparatus of a lot of people, sometimes even in motion onstage. The violin parts are not as basic as one would think they are; there are a lot of notes in there.

What about when you have a solo?

Last year was a little bit tricky, because we did two operas that have big violin solos. That was a brain freeze for me, because you play three numbers, and you have to be in this mode of cuing and playing, then you have to play a Paganini-like solo, which is not fun.

Do your conducting gestures change from the podium to the violin?

It feels much more natural to lead while standing. To be sitting on a chair and trying to organize your body language — I have to do the same as standing, but I have to play. If I give a gesture, it is more immediate, more direct. You give the upbeat, then you yourself play. But it is also much more limited, of course.

How do you manage the complexity of these bel canto scores?

If there is a singing line, and if we accompany, it’s easy: We follow the singer. As Will always says, the singer is the director of his or her aria. And the singer has to be so convincing in the musical gestures, the breath, that we have to follow them. In pieces with multiple singers, it involves a lot of rehearsal time. We could not do that in a system that would allow for only a week of rehearsals.

In the absence of a maestro, how are interpretive decisions made?

The two artistic leaders of each opera discuss that. The singer that is involved is consulted. And of course ideas from the orchestra are welcome. It’s a dialogue, then at a certain point someone has to decide. Life is a compromise.

Joshua Barone is a senior staff editor on the Culture Desk, where he writes about classical music and other fields including dance, theater and visual art and architecture. @joshbarone • Facebook