This Weekend I Have … an Hour, and I Want Something Juicy

‘Harlots’
When to watch: Now, on Hulu.

Season 3 of this historical drama started Wednesday, and it’s as racy and well-plotted as ever, with ample scheming and complicating, complex characters. “Harlots” is set in the late 1700s and follows the conflict among rival brothels, but the show isn’t exploitative or misogynistic; instead, it has a strong feminist streak. Elaborate costumes and wigs abound. If you want something between “Outlander” and “Orange Is the New Black,” watch this.

… a Few Hours, and What Was That Show Again? 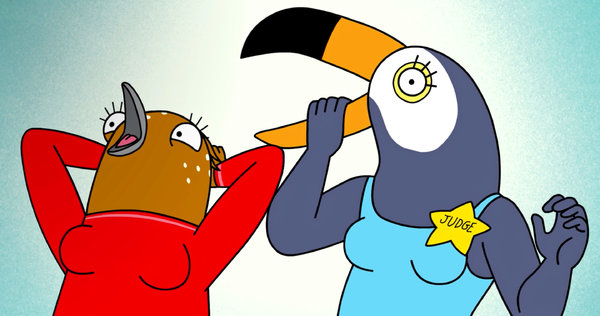 ‘Tuca & Bertie’
When to watch: Now, on Netflix.

If you lost track of this animated gem back in the spring, now’s the time. The show follows Tuca and Bertie (voiced by Tiffany Haddish and Ali Wong), two bird besties and former roommates who are segueing into a new phase of friendship after Bertie moves in with her boyfriend. Tuca and Bertie’s world has the quirky surrealism of a beloved children’s book, but the themes and ideas are quite adult. I needed a few episodes to get into the show’s rhythms and structure, but once I did, I fell in love.

‘Blown Away’
When to watch: Starting Friday, on Netflix.

Finally, a reality contest show about glass blowing. No, really — what took so long? The craft itself is dynamic and dramatic, and the finished work is mesmerizing. “Blown Away” takes a “Top Chef” format and strips it way down: Episodes are a half-hour, there’s only one challenge per episode, and the elimination process is swift and direct. There’s a total lack of producer-made contrivance here, which feels more dignified than other skill-based contest shows. It’s oddly low stakes, but all the glass making is extremely rad.

Margaret Lyons is a television critic. She previously spent five years as a writer and TV columnist for Vulture.com. She helped launch Time Out Chicago and later wrote for Entertainment Weekly, among other publications. @margeincharge