Taylor Mac’s autumn-harvest headdress is such an elaborate landscape of apples and gourds that the gleaming green talons reaching out of it come across as a subtle touch.

Beneath it, the makeup is mesmerizing: an almost trompe l’oeil tribute to the 16th-century painter Giuseppe Arcimboldo, who depicted people with vegetables where facial features would otherwise be.

And the set, in the opening tableau of Mac’s “Holiday Sauce … Pandemic!,” is such a tinselly tumult of color that even the performer’s shimmery costume, bedecked with blossoms and slit up to here, blends right in, as if it were extravagant camouflage.

The look, then, is the first shiny lure of this mature-audiences-only entertainment, whose writer and star has brought a bevy of talent to refashion for streaming the annual live show “Holiday Sauce” — including, indispensably, the set and costume designer Machine Dazzle and the makeup designer Anastasia Durasova.

“The only prompt I gave them,” Mac tells the camera, dryly, “was that I wanted them to make it look like a public-access show on LSD.” 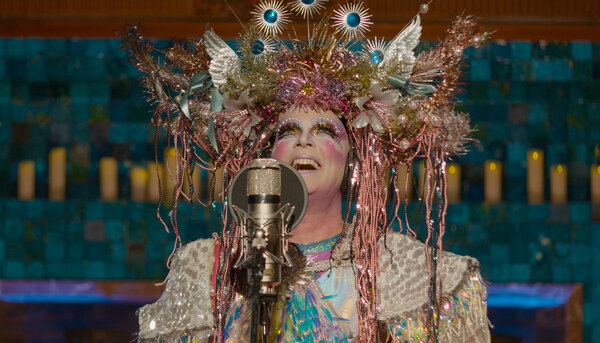 Which this bawdy, spangled, queer celebration absolutely does — when it’s not busy looking like a glamorous concert recording, or a trippy music video, or a cheeky animation, or a cinematic home movie of some of the people in Mac’s chosen family. There are catwalk-dramatic costumes and gorgeous guest stars, with familiar carols and original songs interspersed, irreverently.

For stage artists like Mac — and, at a different spot on the continuum, Irish Repertory Theater, about whose “Meet Me in St. Louis” more in a bit — the fundamental challenge of 2020 has been to reconfigure their work for an audience that isn’t physically present. It can be an awkward undertaking, even more so at this tradition-encrusted time of year.

What “Holiday Sauce … Pandemic!” offers is a come-as-you-are party that doesn’t bother pretending the season isn’t fraught — especially for those who don’t fit easily into cookie-cutter fantasies of domesticity. Acknowledging the pain that can lurk inside this time of year, the show wants to create some winking, slightly naughty, even splendid new memories.

Directed by Jeremy Lydic, with large segments sumptuously filmed by Robert Kolodny inside the Park Avenue Armory, this companion to Mac’s new album “Holiday Sauce” is by turns homey and sleek — though the band, with its string and horn sections, sounds consistently warm and lush. (The music director and arranger is Matt Ray.)

Its high-low aesthetic feels just right, not only as a reflection of an erratic year but also as an encapsulation of Mac’s career, which in recent years has vaulted from the downtown alt fringes into prestige territory. Produced by Pomegranate Arts, the show was commissioned by the Ibsen Festival, the Norwegian Ministry of Culture and the National Theater of Oslo. (Saturday’s three showings followed the virtual ceremony for the International Ibsen Award, which Mac won this year.)

As smashing as both Mac and the Armory look, one of the most captivating segments is the video of the song “Christmas With Grandma,” whose lyrics about traumatic childhood holidays feel more bluntly grim on the album than they do with Dana Lyn’s resilient and cheery felt-tip animations — among them a Mac-faced ornament. (A masked Lyn also plays violin in the “Holiday Sauce” band.)

But the unexpected show stealer is a glittering green Christmas tree that totters and spins through the Armory on precarious heels, arms out for balance and self-expression. We first glimpse it from afar, tiny and comical at the bottom of our screens, entering stage right in a follow spot.

With Machine Dazzle inhabiting this magnificent costume, it is an evergreen at once winsome and gallant — an endearingly bumbling, perseverant emblem of this weird, uncertain, sometimes defiantly festive season.

A similarly intrepid spirit pervades Irish Rep’s “Meet Me in St. Louis,” an experiment in fully staging a musical online: costumes, sets, orchestra and all. Directed by Charlotte Moore, the 13 actors filmed themselves separately from home, their footage edited together later.

I wish I could say it was a great success, and if you close your eyes, this stage version of the classic 1944 film can sound that way. (The book is by Hugh Wheeler, the score by Hugh Martin and Ralph Blane.) The songs are often a delight, with a cast featuring expert interpreters like Melissa Errico — as Anna Smith, the matriarch of a Missouri family eagerly awaiting the 1904 World’s Fair in their hometown — and lovely newcomers like Shereen Ahmed in the Judy Garland role of her teenage daughter, Esther.

It is hard, though, to get past the jarring visuals, which have such a high-definition green-screen aesthetic that I’m sorry to say I kept wishing I could watch through gauze.

With uncredited narration by Moore, who also adapted the script (and played Anna in the 1989 Broadway premiere), the show has an inherently nostalgic tone, whisking the audience back to the turn of the 20th century — such a technological distance from our era that the Smiths’ housekeeper, Katie (Kathy Fitzgerald), disapprovingly refers to the telephone as “an invention.”

So one expects a softer appearance than the video of the actors tends to have, with that crisp, white electronic light that is a hallmark of our age. (The lighting is by Michael Gottlieb.) Put someone lit that way in front of a vintage-looking backdrop (scenic design is by Charlie Corcoran) and the contrast gets right between a viewer’s wish to suspend disbelief and the ability actually to do that.

The editing (by Meridith Sommers) exists on a spectrum. At the charming end is Esther’s Christmas dance with the boy next door, played by Max von Essen in such heart-melting voice that you won’t care how age-inappropriate he is for the role. At the cheesy end is any crowd scene, though it may be most egregious on the trolley, which is too bad for “The Trolley Song.”

What soothes the soul visually and aurally is the orchestra, which we see playing on a bare stage at Irish Rep in the overture and the entr’acte. With music direction by John Bell, orchestrations by Josh Clayton and sound design by M. Florian Staab, the seven musicians sound fabulous.

So I’m not saying don’t tune in to this production. But maybe, for the most part, don’t watch it.

Give your eyes a rest. Just listen.

Meet Me in St. Louis
Through Jan. 2; irishrep.org.

MEET the stars of Netflix hit Bling Empire – and discover the staggering net worths of Anna, Christine, Kim and Kevin