The American presidency has always been a content business. A successful campaign captures the national mood, like a best-selling novel. Candidates are assessed on the quality of their live performances. The president’s role includes sustaining an image. It is as much about what he says as what he does.

But lately this arrangement has become more literal. Donald Trump leapt to the presidency from reality television, while Barack Obama retired into deals with Netflix, Penguin Random House and Spotify. All this prompts a new way of looking at the American presidency: as the election of a kind of content creator-in-chief.

Once engineered through speeches, summits and ads, the job is mutating to fit new mediums. When newspapers and television and even early websites mediated politics, candidates were positioned to appeal to mass audiences, and they were evaluated on broad personality metrics: how they kissed babies or drank domestic beers. But on the internet, politics is organized through niche affinity groups, carried on the backs of unexpected cultural properties and translated into arcane jokes.

If any remnant exists of the American monoculture, it is the presidency. We may not watch the same shows or recognize the same celebrities, but people know who the president is. The difference now is that we can each cast that presidential “character” into our own preferred story lines and imbue him with different personality traits. Perhaps a candidate’s success, as a center of such content, relies less on what people are saying than how much they’re talking.

Take, say, the current president. When Donald Trump won the 2016 election, his online supporters liked to say that they memed him into the White House. All of their semi-ironic internet boosterism had sincerely paid off.

And this was not as unexpected a tactic as it seemed. Wider forces in American culture had been psychically Photoshopping Trump into the presidency for decades. He’d long been cast as a kind of novelty president: a totally ridiculous, not-realistic option, but an option nonetheless. Now those two, seemingly opposed roles — the fake president, and the real one — have aligned.

Perhaps it all began in 1988, when Spy magazine ran an article called “Nation to Trump: We Need You” and reported, “We have come to believe that a Donald Trump candidacy is viable.” That was meant to be a joke, but didn’t Trump’s critics treat his actual campaign like a joke, all the way until he seriously won? Long before Trump’s presidency was a reality, it was, for Spy, a dumb idea. Yet it was an idea: To be parodied as president, he had to be in some way plausible as president.

The magazine commissioned a multiple-choice poll asking, “Who are you most disappointed isn’t running for president?” It slipped in the name of one of its favorite objects of mockery. And it took the result — four percent wished he was running — as an opportunity to knock him again: “Look at these impressive figures Trump can build on (and how he can build!).” Twenty-eight years later, he finished the job.

For decades, it was liberals who recognized Trump’s presidential possibility. In April 2004, a website appeared called TrumpFiresBush.com. On it was a mash-up video featuring footage of President George W. Bush spliced with scenes from “The Apprentice,” a reality show that had debuted that January, so that Trump appeared to “fire” the president. 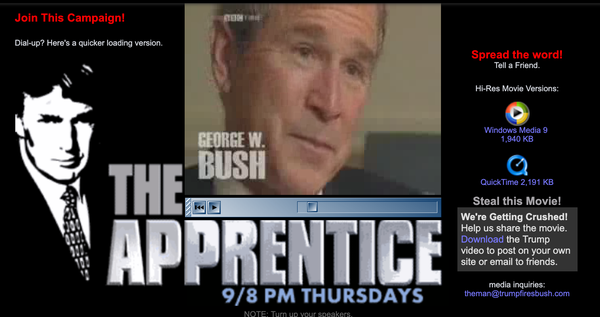 The website was produced by an online activist group called TrueMajorityACTION, founded by Ben Cohen of Ben & Jerry’s, and it used the Trump meme to spur liberals into political action. As the video put it: “We’ll fire Bush together, and have some fun along the way.”

In his 2006 book, “Convergence Culture,” Henry Jenkins cited the video and asked: “Who would have imagined that Donald Trump could emerge as a populist spokesman, or that sympathetic images of corporate control could fuel a movement to reclaim democracy?” Who indeed!

But we kept telling and retelling the same joke. In 2011, Trump sat at the White House Correspondents’ Association dinner, a guest of The Washington Post, as the host, Seth Meyers, riffed: “Donald Trump has been saying he will run for president as a Republican — which is surprising, since I just assumed he was running as a joke.” And in January of 2015, even as Trump weighed a run for the real presidency, he was mulling a role as the fake president in the Syfy original movie, “Sharknado 3: Oh Hell No!”

Trump is often referred to as our “reality TV president,” but that obscures all the other ways he has leveraged his brand: His inherited wealth was extended into real estate holdings, WrestleMania tie-ins, books, golf, steak. He is, really, our president of branding, and his success in politics hinged on his ability to extend that brand into one more avenue — the internet — where the ironic absurdity of his persona became an unexpected asset. Playing the roles of both jester and king, he thrives on channeling the power of the presidency and undermining it at once.

It was once assumed that humor could be sharpened into a weapon against the powerful, but Trump’s presidency calls that into question. What if joking about Trump in the White House actually had the effect of drawing him closer to it? What if it helped to defang the notion — to gradually introduce it into possibility? Today, Trump is our novelty president, and our real one, too.

Amanda Hess is a critic at large. She writes about internet culture for the Arts section and contributes regularly to The New York Times Magazine. @amandahess • Facebook