Erin Wall, whose silvery yet warm soprano voice infused works by Mozart, Strauss, Britten and Mahler with luminous elegance, died on Oct. 8 at a hospital in Mississauga, Ontario. She was 44.

The cause was metastatic breast cancer, Lyric Opera of Chicago said.

Lyric Opera was an artistic home base for Ms. Wall, who received her professional start as a member of the company’s prestigious young artist program, now known as the Patrick G. and Shirley W. Ryan Opera Center. Chicago was the site of the dramatic season-opening performance that jolted her nascent career in 2004, when she jumped in with just a few hours’ notice to replace an ill colleague as Donna Anna in Mozart’s “Don Giovanni.”

John von Rhein of The Chicago Tribune wrote in his review that “in classic showbiz style, she came, she sang and she conquered.” He praised her voice’s “wide compass, gleaming high extension and ability to float a ravishing, seamless line.”

Lyric Opera’s music director, Andrew Davis, the conductor of that “Don Giovanni” performance and a frequent collaborator with Ms. Wall, recalled their performance of Elgar’s oratorio “The Kingdom” in London in 2014.

“There’s a marvelous soprano aria in that, ‘The sun goeth down,’” Mr. Davis said in an interview. “And I’ve never heard anyone sing it more beautifully, with such ease and such poignancy. I think of her singing and I get goose bumps.”

Erin Marie Wall was born on Nov. 4, 1975, in Calgary, Alberta, to two American musicians, Michael Wall and Suzanne (Hill) Wall, and grew up in Vancouver. She started in music as a pianist, but she was concentrating on singing by the time she attended Western Washington University in Bellingham. She later transferred to Rice University in Houston.

From Rice, she entered Lyric Opera’s young artist program in 2001. She swiftly established herself as a rising talent: a lyric soprano with a full-bodied yet agile voice and dazzling facility in her top register. It was an instrument ideal for youthful roles like Marguerite in Gounod’s “Faust,” which she sang in Chicago in 2003, as well as Mozart’s Donna Anna, Pamina (in “The Magic Flute”) and Konstanze (in “The Abduction From the Seraglio”).

This evolution came as she increasingly took on Strauss roles that benefited from more tonal opulence, like Arabella, Chrysothemis (in “Elektra”) and Daphne. When she starred in “Daphne” at the Santa Fe Opera in 2007, Mr. Benchetrit said, the effect was overwhelming.

“I couldn’t speak to her at the end of the show,” he said. “I had to write her a fan letter. It’s the only time I did that with a client.”

Ms. Wall made her Metropolitan Opera debut in 2009, as Donna Anna. She returned as Helena in Britten’s “A Midsummer Night’s Dream” in 2013 and Arabella in 2014. Though acclaimed in staged opera, she concentrated more of her time on concert work, in pieces like Strauss’s “Four Last Songs,” Britten’s “War Requiem,” Beethoven’s Ninth Symphony and, especially, Mahler’s mighty choral Eighth Symphony, in which she was captured on several recordings.

She was a frequent partner of prominent conductors, including Donald Runnicles, Christoph Eschenbach, Michael Tilson Thomas, Andris Nelsons and, perhaps most notably, Mr. Davis. Earlier this year, he and Ms. Wall released a recording of Massenet’s “Thaïs,” an opera they also performed together in concert at the Edinburgh Festival in 2011.

“That Thaïs was a real step, as she portrayed this extraordinary character who goes from being a courtesan to a nun,” Mr. Davis said. “To show the psychological, emotional progress of the character in two and a half hours, in a concert setting, truly took my breath away.”

Found to have cancer in late 2017, Ms. Wall was in treatment for much of 2018, but she continued to perform amid surgeries, chemotherapy and radiation. She maintained her appearances until earlier this year, when her cancer returned and the coronavirus pandemic caused performances to be canceled worldwide.

She discussed her condition candidly in blog posts and on social media; in her Twitter biography, she wrote, “Please don’t use the word ‘battle’ to refer to my life or illness.”

She is survived by her parents; her husband, Roberto Mauro, the director of artistic planning at the Canadian Opera Company in Toronto; their children, Michael and Julia; and her sister, Shannon. 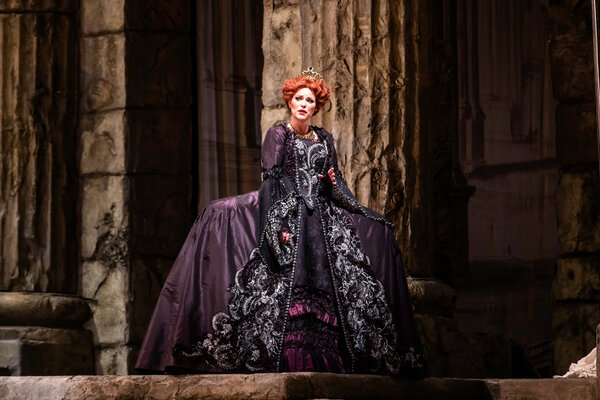 “What resonated between her and the audience was the honesty and directness of her artistry,” Alexander Neef, the director of the Canadian Opera Company and the Paris Opera, said in an interview. “In parts like Arabella and Chrysothemis, she was just very vulnerable. She really carried the emotion of the character.”

Camilla and Prince Charles visit Headquarters of the Bank of England
We and our partners use cookies on this site to improve our service, perform analytics, personalize advertising, measure advertising performance, and remember website preferences.Ok