This morning on Twitter, the hashtag #WeLoveYouElon — as in Elon Musk, the billionaire CEO of Tesla and founder of aerospace company SpaceX — briefly exploded after account DogeCoin Movement tweeted out the tag with the “rocket” emoji and call to action “trend it,” internet-speak for boosting something in popularity enough that it attracts notice. And attract notice it did: including from Musk’s rarely-heard-from mother Maye Musk, who joined in on the hashtag fun and tweeted out a childhood photo of young Elon to tell the world how proud she was of him and his accomplishments, and how pleased she was that he was seeing this love on Twitter. While I’m more than a little leery of any trend that suggests we worship the ground upon which billionaires walk, it’s worth noting that the tag — and especially Musk’s mama jumping on the trend — may indicate that Musk was in fact in need of a lift this week. While this DogeCoin account’s involvement would suggest the tag was a response to backlash over Musk’s recent comments on cryptocurrency, matriarch Musk’s tweet points to one other bit of ego-deflating news that this tag may go a ways toward soothing: Jeff Bezos’ newly-announced trip to space next month. 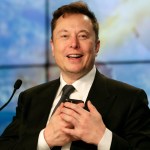 In a now widely-shared post, Musk wrote this message: “So happy #WeLoveYouElon is trending. Hope he has this huge smile now. The world is on his shoulders. Also, Mars @elonmusk #ProudMom.”

Less than 12 hours later, Amazon CEO Bezos shared a video to Instagram announcing that he’d be going into space next month with his brother, boarding the New Shepard rocket made by his company Blue Origin on July 20: “Ever since I was five years old, I’ve dreamed of traveling to space. On July 20th, I will take that journey with my brother. The greatest adventure, with my best friend. #GradatimFerociter.”

Billionaires Bezos and Musk have been locked in an informal space race for years as they independently grow their space companies, and Bezos planning a trip aboard one of his own rockets represents a big step forward that Musk has yet to take — hence why his fans’ and family’s words may be coming at a sorely needed time for the SpaceX founder. Frankly, we doubt Musk is beaming quite as hard as he is in his mom’s Twitter pic today if only because of this news, but who knows — thousands of #WeLoveElon tweets may be just enough to take away the sting of Bezos’ announcement.

Before you go, click here to see whose net worth is higher in these celebrity couples.