When Aziza Chaouni was a girl, she spent holidays with her grandmothers at Sidi Harazem, a thermal bath complex built next to an ancient magnesium-rich spring about seven miles east of Fez, Morocco.

One grandmother loved the new complex, designed by Jean-François Zevaco and completed in 1960, soon after Moroccan independence. “She was born and raised in Fez, in the old city, and she was very keen on alternative medicine,” said Ms. Chaouni, a professor at the John H. Daniels Faculty of Architecture, Landscape and Design at the University of Toronto and principal of Aziza Chaouni Projects. “She was amazed by the new facilities. We would stay in the bungalows that were modeled after the medina — as a child it was like a maze.”

The other grandmother was nostalgic for the pre-modern Sidi Harazem. The springs, set in an arid mountain range, had drawn visitors since the time of the Romans, and Sultan Abu el-Hassan built a 14th-century shrine to Sidi Harazem, a Sufi theologian, on a nearby plateau. “They used to wake up at 5 a.m. and walk from Fez, then simply camp. Locals would offer space in their own homes,” Ms. Chaouni recalled. “For people who lived in Fez, it was their green lung.” 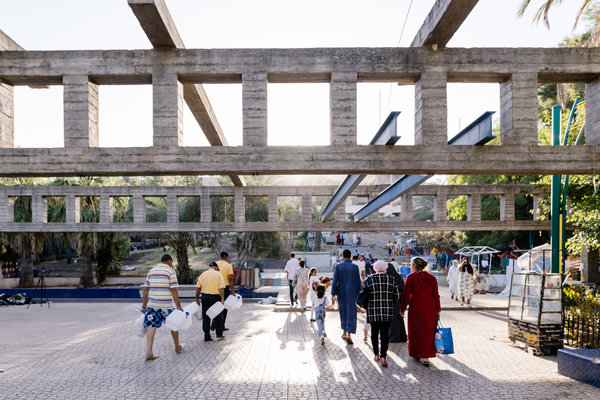 Built in concrete with faceted columns, deep overhangs, and a circular outdoor pool shaded by a disk of concrete that seems to float, Mr. Zevaco’s buildings, which include baths, dozens of bungalows, covered markets and a hotel, combine Brutalist materials with regional elements, including bands of blue mosaic tile and copper work. The newly established Moroccan government wanted to attract Western tourists to the country, while preserving popular national sites. Mr. Zevaco’s design was intended to appeal to both types of visitors, with the bungalows and public spaces reminiscent of traditional buildings, and the elevated hotel and cantilevered shade structure representing the most advanced international architecture.

“Morocco wanted to appear as a progressive young country,” Ms. Chaouni said. Mr. Zevaco reinterpreted European modernism in a local way, by organizing the project around an interior courtyard, with green plantings and reflecting pools that cooled the air. Narrow channels of water wove throughout the complex, leading visitors along the circulation paths.

But by the time Ms. Chaouni was an adult herself, Sidi Harazem had fallen on hard times. Fewer people were visiting the baths, and major sections of the complex, including the market and bungalows, were closed. A renovation in 2000 had tried to make the still-open parts of the site more traditionally Moroccan, veneering the concrete with green tile and carved wooden panels.

Modernism, once promoted as a break from the country’s colonial past, came to be seen as equally alien — and alienating to international tourists. In Fez, as in Boston, London, Sydney and Belgrade, Brutalism was architecture non grata — despite Mr. Zevaco’s immense talents and sensitivity to regional traditions. He was born in Casablanca and studied architecture at the École des Beaux-Arts in Paris before being mobilized for World War II. After the war, he returned to Morocco, setting up his own office and making his name designing white modernist villas. He died in 2003.

His first major public commissions came after the 1960 earthquake in Agadir, where he and other members of GAMMA, the Group of Moroccan Modern Architects, built new housing, schools and public buildings. His 1965 Courtyard Houses in Agadir eventually won an Aga Kahn Award for Architecture. At the same time, Mr. Zevaco began his work for the Fondation Caisse de Dépôt et de Gestion, or CDG, the Moroccan pension fund responsible for the thermal baths at Sidi Harazem. But the optimism that had originally greeted his design dissipated over time; by the end of the 20th century, its owners saw it as an “ugly duckling” and discussed its sale with private investors.

In 2001, on a visit home, Ms. Chaouni went to Sidi Harazem for a swim and was horrified by the renovation. As an Aga Khan Fellow at the Harvard Graduate School of Design, she studied the architecture of tourism in post-independence Morocco, including work by Mr. Zevaco and fellow members of GAMMA like Elie Azagury and Mourad Ben Embarek. Armed with that knowledge, she approached the CDG, convincing Rachid Karkari, the official in charge of Sidi Harazem, that their duckling could — with proper intervention — turn back into a swan.

“We were amazed by the splendor of the plans drawn by Zevaco,” said Mr. Karkari, pointing to the architect’s rendering of the thermal station entrance. In that drawing, called “The Signal,” plants and people climb up a hillside defined by ridges of concrete architecture, a building that rises up and spreads out at the same time. “We hope, through this project, to restore the image of Zevaco’s work so that it regains its former glory.”

With Ms. Chaouni as lead, a team including architects, engineers, researchers and photographers from North America and Africa won a $150,000 Keeping It Modern grant in 2017 from the Getty Foundation. Their goal is to restore Sidi Harazem as an architectural masterpiece, building as before on the natural oasis that has drawn pilgrims since the 14th century, but also adding year-round facilities, creating local jobs and expanding the urban transportation network. The grant, which concludes at the end of 2019, has allowed Ms. Chaouni and her team, with the CDG as partner, to create a road map for restoration and development, which will require future rounds of fund-raising and investment.

Elements of the complex at times recall the work of better-known masters of concrete like Marcel Breuer (the shapely columns) or Oscar Niemeyer (the layered circles of sunshade and pool), but the landscapes surrounding and woven into his complex are distinctly Moroccan, from the plants to the use of water. The idea of an oasis is threaded throughout, with colored tile used sparingly to highlight moments where Mr. Zevaco wants you to pay attention.

The Getty grant is not solely about the architecture, however. As Ms. Chaouni and her team set to work in 2017, she realized that they had to grapple with the legacy of those who have lived in Sidi Harazem, both in the 1960s and now. “Something I discovered as I started working on the project, was that there was a village at the oasis,” she said. “All the people in that village were taken and moved on top of a hill, with a mud house for each family, and given one bag of flour each month. Like everything, to do something visionary for the time, it had some casualties.”

Although its architecture was always supposed to attract international interest, Sidi Harazem was never purely a luxury resort. The hotel, with a restaurant, was designed for Europeans who might be visiting for only a few days, but the bungalows, like the ones where Ms. Chaouni stayed with her grandmother, were designed for locals: close to the ground, with private courtyards and kitchens attractive to Moroccan families vacationing together.

Future plans for the complex include expanding economic opportunities for local inhabitants, from design tours and a museum to a new Zevaco-inspired covered market for local farmers to sell foods including snails, mushrooms, grilled corn and tagines. Fez is known as the culinary capital of Morocco, and Ms. Chaouni and HRM, the tourism branch of the CDG, are talking to the chef Najat Kaanache, of the award-winning Fez restaurant Nur, about setting up a cooking school devoted to Moroccan cuisine. They also realized that young people who had grown up in Sidi Harazem had no idea about its architectural significance; additional grant-funded programs have trained local teenagers as architectural guides.

“The challenge compared to other places is the informality,” Ms. Chaouni said. Whereas concrete cracks in colder locales, here the threats come from plants, animals and unplanned use. “In the developing world we very often have to deal with issues that are very different, lack of funds, lack of expertise, how do you raise awareness for heritage that is a double evil?”

Her report will address both the contemporary human needs and the complex design history at Sidi Harazem, hoping to ensure that its springs are accessible for future generations.