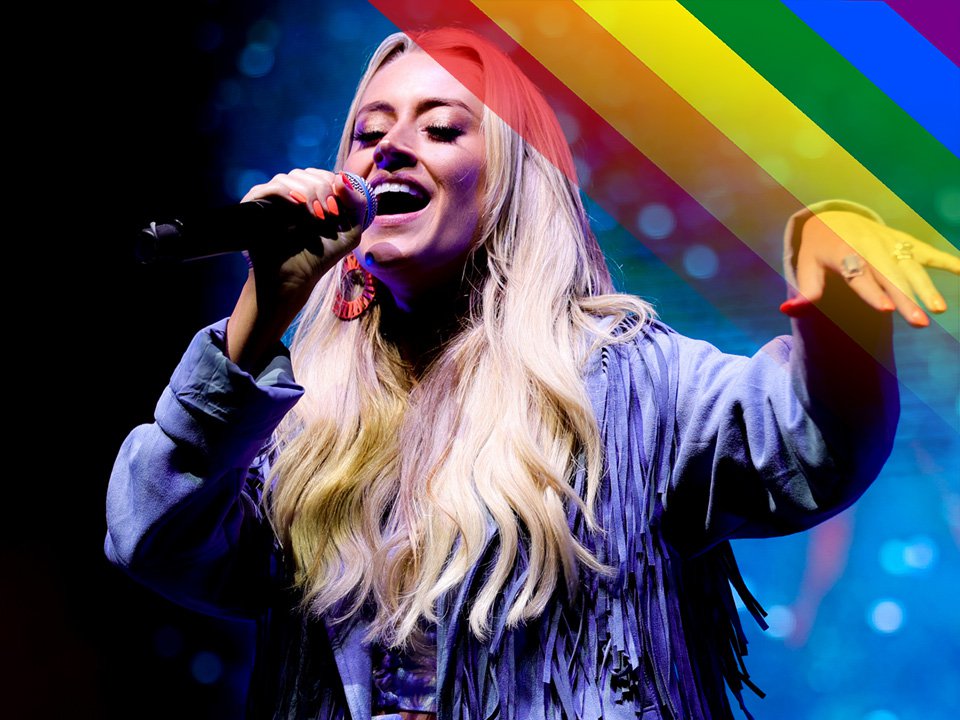 When I was 27, I first came out to my family and friends.

My friends were like, ‘duh this makes so much sense’ and the bonds between us got so much stronger and closer because there was no more wall up. We could just know each other for who we were.

My family, on the other hand, didn’t take it well at all.

My parents were very young when they had me; I had always felt like I could tell them anything – and then I told them this.

My dad just didn’t say much and my mom was devastated and thought every dream she had for me was gone down the drain.

Now I’m so happy to say they’re both on the other side and so grateful that I am who I am and that I found Hilary, my fiancé. They couldn’t imagine me being with anybody else. It’s a happy story at the end of the day but my coming out process was really hard.

I come from a religious family and they always interpreted LGBT+ identities as ‘you’re going to the bad place’.

I’m really thankful to be through that and a lot of it had to do with me putting my foot down. They were never going to make me break up with the love of my life or change me – I had to cut them out of my life for a while because this was a boundary for me.

I took a stand and essentially said: ‘This is who I am, and if you’re not going to accept me for who I am then I’m just not going to be in your life’.

They realised I wasn’t changing – the only thing that was changing was their place in my life.

But the coming out experience that caused the biggest shift in me didn’t happen when I told my family, it was when I came out to the world.

Just last year I publicly came out and the response has been filled with so much love and support. It meant so much, especially as I was really nervous to come out in the realm of country music.

When I was younger, Chely Wright and Ty Herndon – who are both queer country artists – were shunned from the industry. I’ve had multiple people tell me, ‘That could be your story’.

I ended up getting really sick with ulcers from bottling everything up and concealing who I was. My doctor told me I had to get off the road immediately. He said, ‘You’re so unhealthy, you need to let your body heal’.

That was the moment I realised, ‘this is killing me. Not being who I am is literally killing me’.

Over that time period when I had to be off the road I wrote so much; I knew that when I put it out I had to be nothing but myself.

I went to my label and told them, ‘Listen, I want to release new music but I’m not going to do it unless I can fully be an out country singer. It’s either going to be OK or it’s not – but either way I’m fine with it.’

I write differently now because I don’t have to worry about saying the wrong thing – this is who I am and everyone knows who I am now.

My songwriting is better, my performance on stage is better. Just a few months ago I played at the Grand Ole Opry, a renowned country music venue. I’ve been playing with the house band for five years now and the piano player told me, ‘I don’t know what it is about that performance but you were just so you.’ He had no idea what was going on.

People can see it in you when that secret has finally been lifted. All of a sudden, you have a new perspective on life that you can be exactly who you are and love out loud.

Coming out changed everything from how I dressed to how I talked to people; I was no longer mad at the world. Everything was easier.

I have no shame anymore. I know where I stand with God and no one else should have anything else to do with that relationship.

The first song you learn in Bible school is Jesus loves Me, This I Know. Then suddenly you figure who you love means Jesus isn’t supposed to love you anymore.

I really had to deconstruct that in my life. I’m not religious anymore, I’m just spiritual. I believe in God and believe I was made how I was made. Coming out has got me very far from religion, but very close to God.

By the time I came out publicly, I had been with my fiancé, Hilary, for five and half years. She was out of the closet and then when we got together she had to get back in it again.

For that to be on my back, it was horrible. Being out has radically changed everything in my life – but especially our relationship.

I have no shame anymore. I know where I stand with God and no one else should have anything else to do with that relationship

Hilary and I have always been good to each other since the beginning but we’re very loving with each other. But that’s hard to do when you’re both in the music industry and restraining who you are. Eventually, that takes its toll on a relationship.

We had to take this protective stance – but what the hell were we protecting? We were just putting a strain on our relationship for no reason.

I was living so secretively and shamefully that I just would shy away from questions and certain topics in interviews all the time. Now, that armour is off. My fans get to know the huge part of me that is Hilary – my fans love her too now.

I lived in so much fear of what would actually happen when I came out and the reality of it was much easier than that feared. But I did go through a very hard time – specifically with my parents.

I was dreading for as long as I can remember, but everyone has their own journey and process.

In an ideal world I could go back to my 24-year-old self and say, ‘this is going to be OK. You will be good and have a partner that’s more wonderful than your wildest dreams. Your life will be better than you could even imagine’. I wish I could tell her that.

But the process I went through was an essential part of who I am now, and I am very proud of that person.

Of course, I wish that process was easier and faster but for anyone who is in the process of coming out – you deserve to be loved just like everyone else on this planet and don’t let anyone tell you any differently.

Religion will tell you that you should be celibate because you’re gay and shouldn’t love anybody or you should be with someone from the opposite sex who you won’t love.

If you’re afraid you could be walking into an abusive situation, find resources such as The Trevor Project in America to help escape your living situation. Alternatively, attend LGBT+ counselling with your parents and a therapist can talk things through with your family and get professional help on their journey.

Remember the LGBT+ community is so supportive – find your group, wherever you live, that can be your safe place.

I’m so thankful for a community that’s so loving no matter what. No matter how scary coming out can be, there is a family in the LGBT+ community that will welcome you with open arms.